I want to assassinate the Chick-fil-A cow

Earlier this morning, while driving my daughter to the bus stop, I saw him. Eh, it. Eh, him. It/him. Whatever.

He/It was walking from some event. We were at a crosswalk, and there was a car between he/it and the front fender of my Prius. Fantasies immediately rushed through mind: My foot slamming down on the gas pedal, he/it soaring high in the air, letting loose a blood-curdling “mooooooo!” as he slams—utter first—into the pavement. Then I run him over, repeatedly, cow ooze flowing from his cow eyeballs, while screaming, “Go fuck yourself, you fucking asshole wanna-be oxen!”

Yes, I really want to assassinate the Chick-fil-A cow.

Why? I’m not sure. Personality flaw, perhaps. Irrational fear of cows. To me, the Chick-fil-A cow (whose name, apparently, is the awful “Eat Mor Chikin“) is the leader of a truly repugnant chicken holocaust, all in the name of self preservation. His poor, choppy penmanship—often etched in blood red along a white canvas—strikes me as little different than other past emblems of the occult and evil. Out here in California, the Chick-fil-A cow seems to show up at tons of events, ranging from parades to college football games to school read-a-thons. Hell, my son’s elementary school has welcomed the Chick-fil-A cow on multiple occasions, for reasons I have yet to understand. Yes, he hands out coupons for $2 off a (naturally) chicken sandwich. But kids—like dogs—smell bad. And I have yet to see a child of any age go running to the Chick-fil-A cow for any remote reason. They know he is a sinister thing. A sinister, sinister thing.

I posed for a photo. We both smiled. Beneath my breath, I whispered to the Chick-fil-A cow that I was on to his sinister plan of world domination; that I would let everyone know he was an evil bastard with an eye for mass devastation. He simply nodded, then handed me a coupon for $2 off a (naturally) chicken sandwich.

I used the coupon and saved $2 off a (naturally) chicken sandwich. 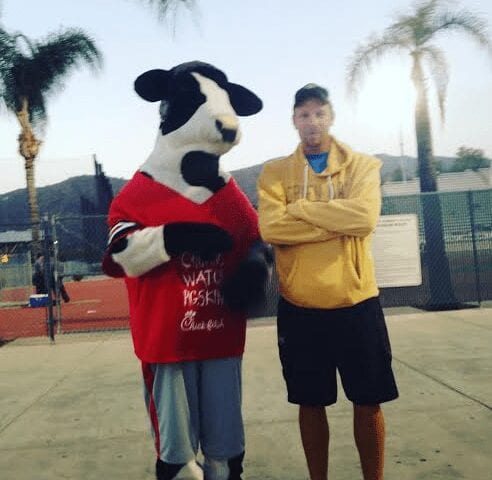