As some people here know, my first book was a biography of the 1986 New York Mets titled, “The Bad Guys Won!” It was a surprise best seller, and still scores me lots of positive words from supporters of the ol’ Shea Stadium denizens

Anyhow, with the Mets back in the playoffs I wanted to do something funky. Hence, here’s my ranking, from one to 36, of my favorite-to-least-favorite members of the ’86 Mets …

1. George Foster: I know this makes no sense. Foster was an ornery weirdo who: A. Never earned the $2 million per season the Mets paid him; B. Accused the team of racism and was released before the playoffs. All that said, his 1982 signing brought hope to a hopeless franchise. Plus, the man had the best lamb-chop sideburns of all time.

2. Ed Hearn: Gary Carter’s primary backup was nothing special as a Met, but he’s the Bad Guy I’ve kept most in touch with. Ed had gone through some heavy health problems, but maintains a remarkably positive attitude.

3. Kevin Mitchell: He was crazy. Favorite quote from the book was Mitchell describing what was left after he dragged a Pittsburgh Pirate’s face along the AstroTurf. “White meat.” Bonus points for having a bullet lodged in his back.

4. Mookie Wilson: He’s just the nicest man of all time.

5. Ron Darling: True story. Shortly after the book came out, I was scheduled to appear on Best Damn Sports Show with Darling and Lenny Dykstra. A producer told me Dykstra wouldn’t attend because he was angry. Hence, I was nervous when Darling approached. The next thing he said made my year: “Jeff, you nailed it.”

6. Dwight Gooden: I know … I know—he’s a mess. But if you were a kid back in 1986, Gooden was everything. I still maintain his ’85 season goes down as the best pitching run in the modern history of the game. 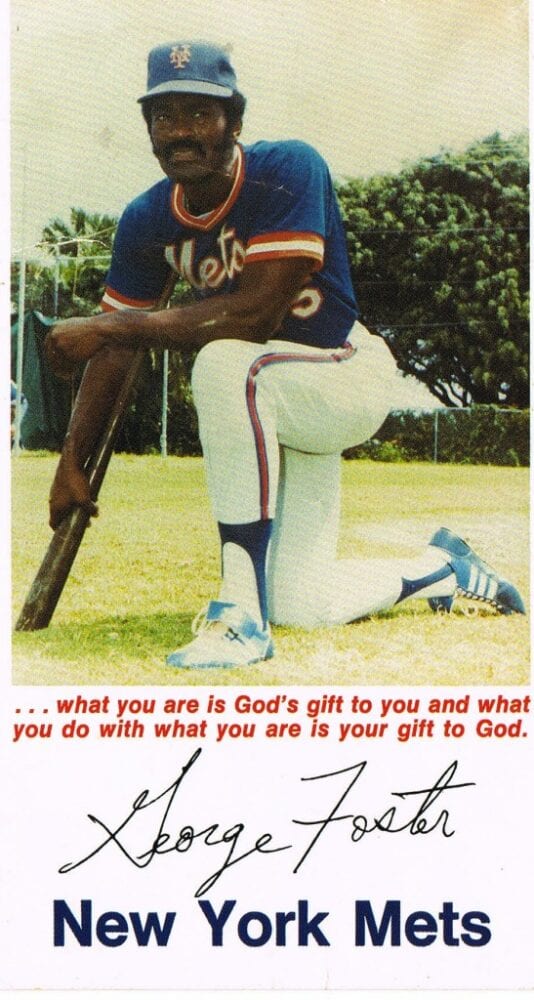 7. Bruce Berenyi: This is weird. I understand. So why such a high placement for a guy who appeared in just 14 games in 1986, before vanishing into the mist (I’d heard, years later, he was working in a golf club’s equipment room somewhere)? Because Berenyi’s stuff was wicked. His ball moved all over the place. He threw hard. I was always a fan of potential, and Bruce Berenyi’s potential fascinated me. Sadly, he never reached it.

8. Keith Hernandez: To a 14-year-old boy, he oozed cool. The nickname (Mex), the mustache, the cigarettes in the dugout, the slick glove, the .300 bat. Just cooler than cool. Plus, Seinfeld.

9. Rafael Santana: I don’t think a guy like Santana reaches the Majors in 2015. He couldn’t hit, he only had so-so range, his throwing arm was terrible, he had very little speed. So why did he stick? It has to be the name, which sounds amazing when it rolls off the tongue of a PA announcer.

10. Jessie Orosco: The year was, I believe, 2002, and Sports Illustrated asked me to profile Orosco, the longtime Major League relief pitcher who was still going strong into his mid-40s.  The ol’ Met was game, and I flew out to wherever he lived in Southern California. When I arrived, he asked how I’d feel about visiting Legoland. “Um, that’d be great,” I said.

“Cool,” he replied. “My daughter wants to see a concert there.”

So we went. Me. Jesse. Jesse’s wife. Jesse’s daughter. The concert was a young, relatively unknown singer named Jessica Simpson, performing for free. I remember little, save for the moment when she called a soldier up onto stage and sang to him. I pretty sure she crooned over piped-in tracks. Not an indictment, just a memory. Anyhow, it was fun. And, on the way home, I sat in the front seat of Jesse’s big black Humvee. Before reaching his house, we heard thump-thump beneath the front right tire.

11. Ray Knight: His cold cocking of Eric Davis is one of the coolest fights ever. He looked like a nice man, but could quickly morph into vigilante.

12. Wally Backman: He looked like a wad of gum stuck beneath your shoe with some hair stuck to it—but the second baseman was pure gangster. Took zero shit.

13. Tim Corcoran: I failed to interview him for the book—but not for a lack of trying. So why No. 13? Because he’s painfully unmemorable. Seven at-bats, zero hits, never received a ring or playoff money.

14. Lee Mazzilli: An all-time underrated comeback story. Was a Met golden boy back in the late 1970s, then was traded to the Texas Rangers (in a steal, the Mets got Darling and Walt Terrell in return), moved to the Yankees and Pittsburgh. Was released by the Pirates, signed by the Mets and everyone turned happy happy. Excellent pinch hitter.

15. Darryl Strawberry: He was truly a pampered jerk in 1986, but much respect for the way he’s turned his life around. In an unexpected ironic twist, now lives in St. Louis.

16. Danny Heep: Not an exciting guy, and little more than a solid pinch hitter. But I always found it funny how the Mets traded Mike Scott to Houston for Heep, and everyone later ripped the team for getting swindled. The premise, however, lacked context. Scott was a brutal pitcher in New York who learned to scuff as an Astro. That’s what made him a Cy Young-caliber arm. So the Heep deal was, technically, logical.

17. Gary Carter: A sympathetic figure, and not merely because he’s passed. Carter—tremendous player worthy of his Hall induction—was the oddest fit on this ballclub. A squeaky clean Bible thumper in a room of sinners.

18. Bobby Ojeda: I can’t think of Bobby O without recalling the 1993 boat accident that killed two of his Cleveland teammates. But few remember he was New York’s best starter in 1986—and he detested the Red Sox, who traded him to the Mets.

21. Kevin Elster: Just 21 at the time, Elster was living the dream, riding along the World Series ride. I later learned that Kevin—a very handsome dude—was getting laid more than anyone on the roster. Which is an accomplishment.

22. John Mitchell: Zero of 100 New Yorkers would recognize John were he to walk down the street, but he has a truly harrowing story to tell. Here, take a read.

23. Tim Teufel: Came over from the Twins to platoon with Wally Backman. Three claims to fame: 1. Lost game one of the World Series when a ball went beneath his legs; 2. Arrested at a Houston bar; 3. The Teufel Shuffle.

24. Sid Fernandez: How good was the Mets’ rotation? Fernandez—fourth starter—went 16-6. I love that he thought WWE matches were real.

25. Randy Niemann: People forget he appeared in 31 games for the 1986 Mets. People forget because they were largely meaningless innings. Niemann was to the team what Adam Morrison was to the Lakers of a few years back. There, included, but inconsequential save for his Grade-A mustache.

26. Ed Lynch: The saddest story on the team. Lynch debuted with the Mets in 1980. He was a key arm for a lot of tragic years. Then, in 1986, he’s traded to the Cubs—and the Mets clinch the division against Chicago. With Lynch watching. And muttering beneath his breath. Smart dude; got his law degree.

27. Rick Anderson: There were a bunch of awesome storylines that season, including Anderson—a 29-year-old lifetime minor leaguer (drafted by the Mets in 1978) who received an emergency Big League start, pitched beautifully and stuck around long enough to snag a ring.

28. Dave Magadan: Nice guy, wound up coaching with the Padres. Was supposed to be the next great Met hitter, but could never figure out power.

29. Rick Aguilera: He was the fifth starter—and turned into one of the elite closers of the 1990s. THAT’s how sick the staff was. To me, Aguilera’s biggest lifetime achievement was turning in the most competent rap showing on “Get Metsmerized.”

30. Howard Johnson: Not fair to a great hitter, but he always sorta bored me.

31. Terry Leach: Went to Florida to interview him for the book. Such a lovely guy, was working as an interior decorator. Which was a first for me, in regards to retired pro athletes.

32. Roger McDowell: Two Mets reacted with hostility when the book came out. One was Dykstra, the other McDowell. I never knew why, but it irked me. Still, fun guy on that club. Hotfoot king.

34. Barry Lyons: A couple of years ago I suggested something on either Facebook or Twitter that was sorta liberal, and Lyons immediately dumped me. So, hey.

35. John Gibbons: I always felt bad for Gibbons, who was the Mets’ catcher of the future until: A. He got hurt; B. Gary Carter came along. I’d say things have worked out OK.