If you repeat something often enough … 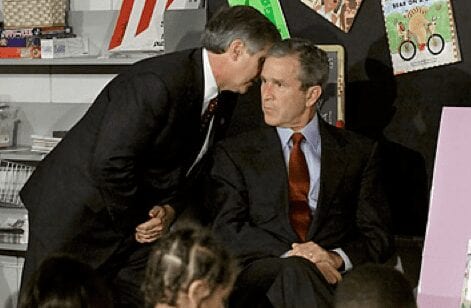 I don’t blame George W. Bush for Sept. 11, 2001, and it has always irked me when people do. Bush was president, not a mind reader. And even if he could have responded better to a report about looming al-Qaeda attacks on America (with commercial airliners as potential weapons), there is no real reason to think the president of the United States truly missed an opportunity to stop the terrorists. They had a plan, they executed it. Again, Bush was not a mind reader.

That being said, I’m equally troubled/confused by Jeb Bush’s oft-repeated line that his brother “kept us safe.” I’ve now heard him cobble together those three words myriad times, and no matter how often he utters the sentiment, well, it’s not true. I mean, how can it be true? Terrorists overtook four American commercial airliners. Two of them crashed into the World Trade Center. Another slammed into the Pentagon. The fourth landed in a Pennsylvania field, thanks to the courageous actions of some passengers. So how, exactly, did George W. Bush keep us safe, when thousands of Americans died? I mean, in what warped universe can one even consider making that claim? Is Jeb referring to post-9.11, when we, ahem, attacked Iraq, a nation that had nothing to do with 9.11? Because, if so, he’s forgetting/overlooking the travesty that turned into, with ceaseless dead and injured troops and the ultimate rise and expansion of ISIS.

Anyhow, earlier today Donald Trump (who else) called out George W. Bush, suggesting he failed during 9.11. This, from a New York Times piece …

Of course, the Republicans jumped to attack Trump. How dare he say such a thing. Thank God we had George W. Bush—and not Obama—in office. Trump isn’t a true Republican. He doesn’t share our values. Blah and blah and double blah.

Again, is Bush to blame? No.

But is Trump’s take incorrect? No.

But was Jeb right in his Twitter response? You be the judge …

PrevPreviousA visit to the dentist
NextWhat becomes of Daniel MurphyNext