God and the Little League Pledge 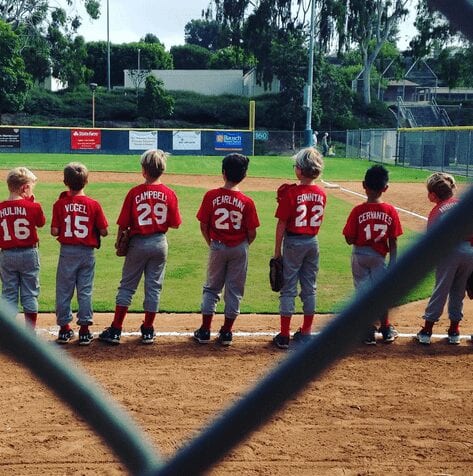 My son is a ballplayer.

By “ballplayer,” I don’t mean he’s the next David Wright or Mike Trout. I simply mean he plays Little League baseball, has a bit of scrappiness to him, enjoys the game and the weekly tradition of a post-game Slurpee.

He’s now participating in fall ball, and before every game the kids line up along the first and third baselines to recite the Little League pledge. Which sounds like a pretty nice tradition—reinforcing the ideals of teamwork and sportsmanship. Seriously, I have no problem with that. Hell, in this age of hyper-competitive nonsense, I encourage it.

That being said, here’s what they utter, in unison …

I know what I’m about to write goes against the ideals of every Sarah Palin-loving slave to patriotic godliness, but, man, do I cringe when the first line comes out. Really, I don’t get it. What the hell does trust in God have to do with Little League baseball? Personally, I don’t believe in God, and I’m not sure my kids do, either (actually, I know my daughter, who’s 12, doesn’t. But I’m not sure about the 9-year old). But that doesn’t mean we don’t subscribe to fair play, to sportsmanship, to teamwork and positivity. We do.

To be clear, there are no bad intentions here. None. The coaches, the league—they’re all just doing their best. In fact, I don’t even think Little League of America is making any weird efforts to squeeze religion into baseball. A quick glimpse at the website offers this explanation, which is quite interesting: 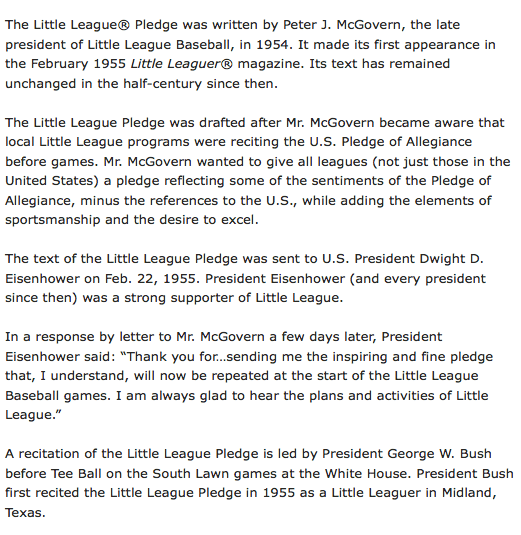 Personally, I prefer the pledge be said, but without the God line.