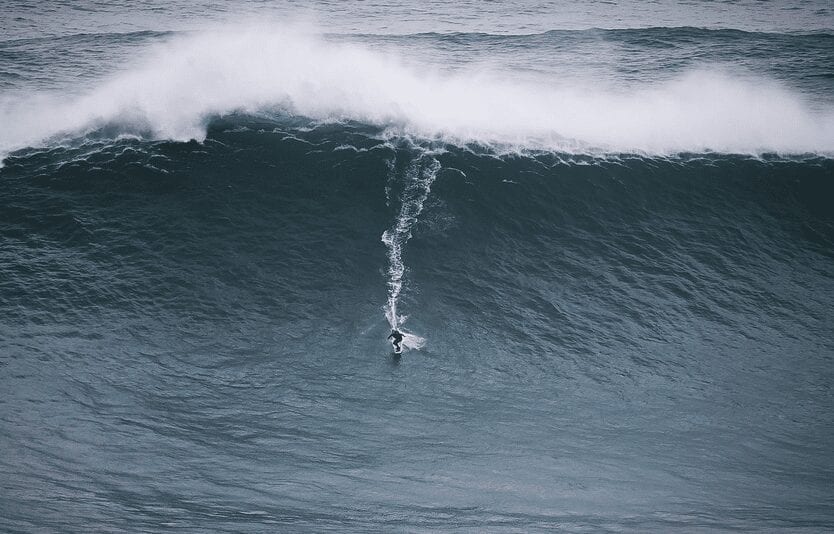 Despite living about 10 minutes from the Pacific Ocean, I know diddly about surfing.

I mean, I know it takes really good balance, I know a board’s involved and I know the stuff I see Andrew Cotton do scares the living crap out of me.

So, naturally, Andrew Cotton is the 234th Quaz Q&A.

The basics: He’s British (born and raised in Devon). He’s a freaky athlete. He’s one of the dominant forces in the world of big wave surfing. Last year, he did this. Wait, lemme say that again—He. Did. THIS!!!!!! On Feb. 2 at Nazaré—atop a 60-foot wave. He also blogs regularly about his adventures here, and Tweets here.

Andrew’s answers are sorta short, but his words (and rides) carry some serious heft.

Andrew Cotton, take a ride on the Quaz …

JEFF PEARLMAN: OK, Andrew, since I’m a land-loving 42-year-old wuss, I’ll start with a basic one, and beg you to be as descriptive as possible. What does it feel like, in the moment, to be riding a huge-ass wave?

J.P.: My son plays baseball, and one of the early tricks is getting him over the fear of being hit by a ball. It’s sorta hard—young kids tend to flinch, duck, shuffle backward. All in the name of avoidance. Andrew, how does one learn not to be afraid of wiping out, slamming his head into a rock, drowning? How did you?

A.C.: Breathing techniques and training gives me a lot of confidence. I simulate the demands of potential stressful situations in all my training with Bay Fitness. I always make sure I feel ready and I always try to relax and stay calm when I fall or get caught out by a big set. 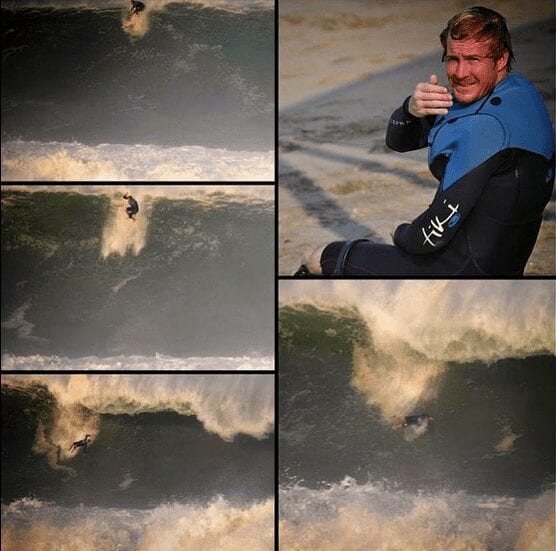 J.P.: What does it feel like to be drowning? I’m sure you’ve had moments. Is it panic? Chaos? What?

A.C.: Panicking is the worst thing you can do. I’ve trained to hold my breath for up to five minutes. I’ve trained to remain calm even when exhausted. I don’t panic. I have full confidence in my safety team. If I did panic that’s when I could get into trouble.

A.C.: I felt so comfortable in the womb I knew I was destined for the water. I moved to Barnstaple when I was eight and immediately spent as much time as I could in the ocean. When I started traveling I realized I was comfortable in big waves. Then I just got really fortunate to get the opportunities I got and I’ll always be grateful to be able to do what I love and not fix broken toilets.

J.P.: Do you fear death? Like, does it worry you at all? Because it seems, in your profession, one either must have a horrible fear of death or zero? So, which? And why?

A.C.: Yes. No one wants to die. I often get asked this type of question as I have a family, etc. However, I don’t think anybody realizes the lengths we go to to make sure we are as safe as we can be. The Patagonia inflatable vest, and my custom Tiki Impact vest are amazing, as is my team—Garret, Hugo, and our trainer, Blakey. And his team at Bay Fitness, who do breathing, yoga, therapy, training psychology.

J.P.: This might be a dumb question, but how have devices like GoPros impacted your world? For the better? For the worst? Because, while it’d seem to be all wonderful, I find the increased need to document absolutely everything in the world sort of annoying.

A.C.: It’s great. I love using them but my wife gets so annoyed when I still have it strapped to my head when we’re being romantic. I by no means feel the need to walk around with a GoPro strapped to my head 24/7. When I free surf I just surf. I don’t usually need documentation. 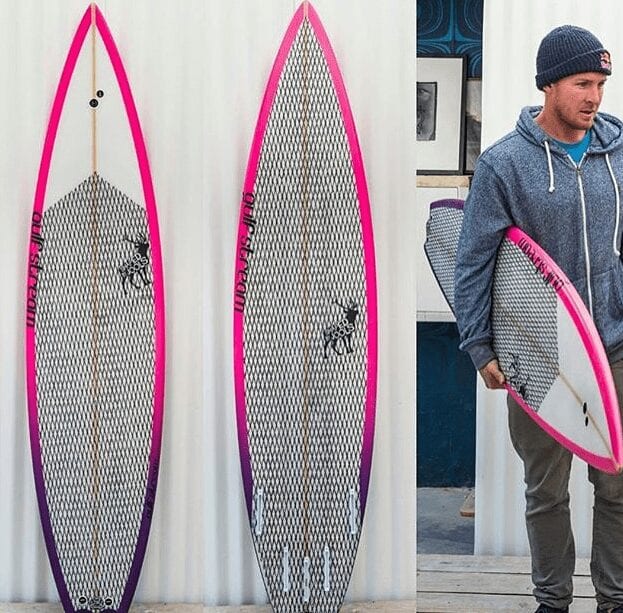 J.P.: How do you survive, financially? I mean, I know you have sponsors. But how lucrative is surfing sponsorship? How hard is is it to attain backing?

A.C.: It’s never been easy. It’s a belief and a passion which have led me to where I am. If I were just doing it for money I’d be a plumber. I’ve been so lucky with the Crowdfunder and the Red Bull sponsorship. Now my profile is growing and growing and I love putting Britain on the world surfing stage.

J.P.: You live your life around oceans. You chart waves, search for conditions. Have you seen climate change having noticeable impacts on the ocean? Has it affected your world/life?

A.C.: I think storms have definitely got bigger over the last couple of years, especially in the Atlantic. Coastal erosion is a worry but you just have to do your bit and help whenever you can. Croyde put Christmas trees in the dunes this year to try and prevent us losing the dunes. 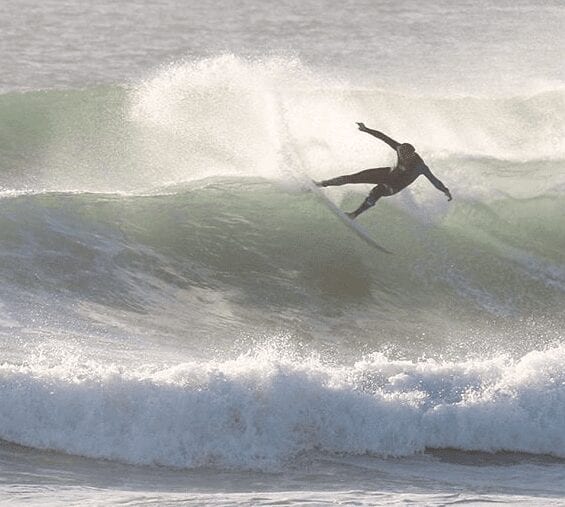 J.P.: In 2012 you towed American surfer Garrett McNamara into what the Guinness Book of World Records confirmed as the biggest wave ever surfed. Andrew, I copied that from your website and, eh, have no idea what it means. Please explain …

A.C.: In Nazare Portugal I was driving the ski. I towed Garrett into the current world record for the biggest wave ever surfed.

J.P.: Can anyone surf? Can anyone—with work—be good at it? What does it take? Physically? Emotionally? Spiritually?

A.C.: I like the old favorite saying: “The best surfer is the one who’s having the most fun.” I don’t like seeing miserable or angry people in the sea. Why don’t they go and watch some reality TV? 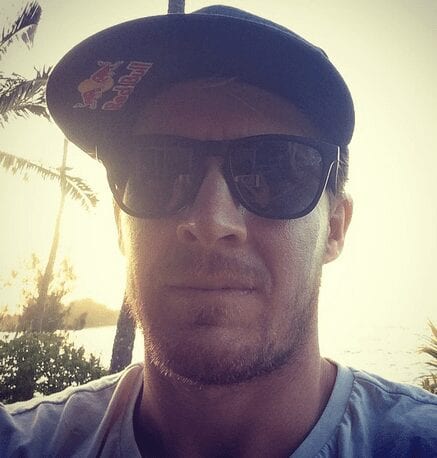 • Celine Dion calls. She’ll pay you $100 million to move to Las Vegas and spend the next 365-straight days as her surf coach. The conditions: You have to sleep under her table, only wear T-shirts that read EMMANUEL LEWIS FARTS TOO MUCH and can only eat oatmeal and papaya. You in?: Yes.

• Rank in order, favorite to least—Bethany Hamilton, Dikembe Mutombo, Liam Neeson, Diana Ross, French fried potatoes, the third toe on your left foot, Bell Biv Devoe, Kay Jewelers, Nicki Chapman, California: I don’t really know a lot of those people but Bethany Hamilton is very inspirational. I don’t eat French fried potatoes I’m an athlete. I must be honest, I’ve really been neglecting and taking the third toe on my left foot for granted. I’m going to give it some attention while we finish this interview. I think I’m flexible enough to put in in my mouth. PS: California is alright.

• How many days of the year are you home with your family?: Still most of them. Some people may be at home 365 days a year but are they present? Are they giving as much love as I do? Ha—my wife might not agree

• Sometimes when no one’s looking I pick my nose and stare at it for a while. Does this make me more unusual or normal?: Don’t worry. I do a lot worse.

• I’m frustrated by Carrie Underwood’s refusal to go more classic country. Your thoughts?: I am a lesbian trapped inside a man’s body and my father hugged me more than my mother as a boy.

• One question you would ask Duke Kahanamoku were he here right now?: If he had to would he rather administer oral gratification to a man or receive a sausage in the bottom.

• Would it be significantly easier to teach a world-class athlete like Usain Bolt to surf than, say, David Pearlman, my 45-year-old brother?: Depends but usually world-class athletes are good at everything. I’m happy to try with both then let you know. Is David up for a big one?

• The Miami Marlins are bringing back Ichiro. Dude’s 42 with a slow bat. Think he can help?: Age is just a number. Look at surfing. Slater, Parko, Fanning, Dorian, Garret McNamara are still in their peaks. Let’s give Ichiro a chance. Don’t write him off just because he’s bald and fat. Is he?

PrevPreviousThis is just wrong
NextKobe at the endNext