What a writer can’t do

In case you missed this, earlier today Deadspin wrote about a little Twitter battle between Ryan O’Halloran, the Jacksonville Jaguars beat writer for the Florida Times-Union, and defensive end Chris Clemons.

Here’s how it went … 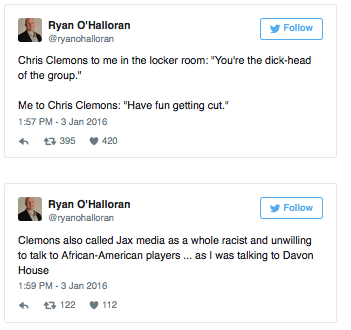 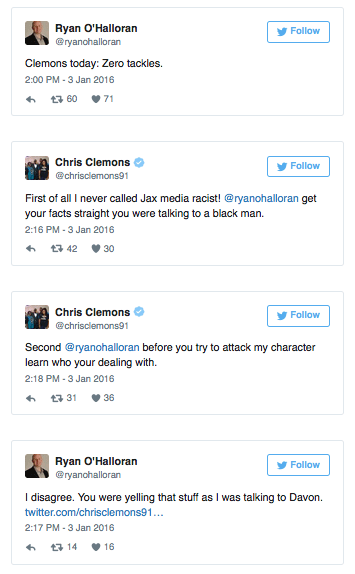 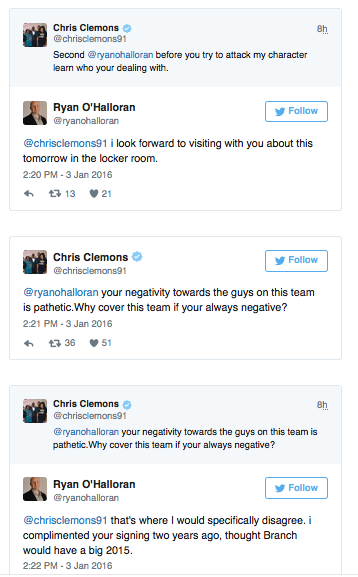 OK, so first, I totally get the impulses of a media member to tee off. I truly do. I mentioned this a few minutes ago on Twitter, but one of my not-so-fine moments came when I cursed at Will Clark as he was ripping into me in the Arizona Diamondbacks clubhouse a decade or so ago. As I walked off, I felt empowered and sorta cool. But, in hindsight, it was woefully unprofessional. I’m the writer; the guy initiating the interaction. It is not my place to rip, curse, insult, slam. Yes, if I’m physically threatened I’m allowed (obligated, even) to defend myself. But I can’t be the instigator. Ever.

Here, Ryan O’Halloran—for no apparently good reason—instigates on Twitter. This could have been handled in the locker room, with the media relations staff. Better yet, he could have approached Clemons after everything cooled down. But this … no. No, no, no. Not cool, not professional, not justified.

Also, it sorta blows a pretty interesting potential story. Maybe Clemons does, in fact, think race has tinted coverage of the team. That’s not only provocative—it’s fascinating, and an angle worth pursuing. Is he alone in feeling this way? Is it a collective take from other African-American Jaguars? Is race an issue in the locker room? Hell, were I covering a five-win team, I’d be looking for anything even remotely unique. This oozes unique—but now it’s an impossibility. Bummer.

Also, “Have fun getting cut” crosses a major line. It’s vindictive, ugly. Like Clemons or hate Clemons, you need to cover him sans bias. That’s the job of a beat writer, period.

Again, I understand the writer’s emotions. But it’s not right, and if I’m O’Halloran’s editor, I have him show up early tomorrow, ask to speak with Clemons and apologize.