In case you forgot to check the sports scores, the Niguel Aliso Warriors beat the Niguel Aliso Gatorsaurs, 37-18, at Aliso Niguel High School Sunday afternoon. According to the standings, the setback dropped the Gatorsaurs to 1-6.

This, however, is a misprint.

By “we,” I mean, well, we. I am the rookie coach of the Gatorsaurs, which is to say that, with today’s season-ending defeat, I have the worst winning percentage in the history of organized basketball. Or, put different, I am no Johnny Bach or Stu Jackson. What I am, however, is extremely proud of the seven remaining members of our historically-bad-yet-historically-awesome 8- and 9-year-old basketball team. To delve into (truthful) cliche, I loved coaching these boys, who played hard, ran hard, fought hard even as we were regularly losing by 10 … 20 … 30 … 40 (yes, forty) points. Which, of course, begets the all-important question: What the hell happened that a team regularly lost by 10 … 20 … 30 … 40 (yes, forty) points?

The answer: Um, everything …

Last year, shortly after we moved from New York to California, my son Emmett decided he’d like to play youth basketball. So we signed him up for the local NJB league, and he joined a team coached by a wonderful man who had zero knowledge of the game. I don’t mean that as an insult—he was a terrific guy and a divorced parent who wanted to spend quality time with his son. So, lacking even a base understanding of hoops, he volunteered to coach, then let the kids do, eh, whatever they wanted. His son shot about 30 times a game, and every now and then even scored. Despite some strong talent, we went winless. Which, truly, didn’t matter. Emmett had a great time, made some nice friends, gained confidence.

Heading into this winter, I asked Emmett if he’d like me to coach. He was all for it, so we reached out to the NJB, enrolled Emmett and requested a team. The first sign of trouble came when we heard nothing. Then more nothing. Then more nothing. Finally, after some badgering, NJB named me the head coach. There was a draft day that I had to miss, but the NJB assured me it was no biggie; teams would be fairly divided.

We played in a six-team league. Two teams in our local area, four from down I-5 in San Clemente. There were eight kids at our first practices. My assistant coach, Jim, was terrific from the get go. Here’s the impression from those initial sessions:

• Dylan: One of the best 10 players in the league; very smooth and athletic.

• Ashton: Youngest and smallest (he’s only in second grade). Super scrappy, can dribble but travels a bit. Very raw.

We practiced Tuesday nights at an outdoor court, and I struggled. For example, in wanting to emphasize defensive cohesiveness, I overlooked little things like free throws and jump shooting. We’d do 2-on-1 attack-the-hoop drills without first reviewing basic stuff. The wife rightly noted that I was assuming the boys knew morsels (“box out,” “attack the board,” “baseline”) that they likely did not. I talked too fast, jumped from topic to topic too quickly. I’ve coached baseball before, and the sport’s organized compactness fits me well. Basketball, on the other hand, is fluid and ever-morphing. Not easy. My best move probably came in regards to the team’s name. NJB initially called us the Wolverines, which is A. The local high school mascot; B. Boring. So, sans permission or approval, I changed it to the Gatorsaurs—an animal my son invented when he was 5. Win or lose, one of my favorite moments from the games inevitably came when a referee or opposing coach would say, “What’s your team name?”

We played our first game in December and lost 35-14. We followed with a 23-13 defeat, then traveled to San Clemente to the drubbing of all drubbings—a 40-12 setback at the hands of a team featuring two Yao Mings and a DeMarcus Cousins. Being serious—the team was filled with skyscrapers, and if you believe they were 9, I believe my real name is Halle Berry. Here’s my son guarding their second tallest player … 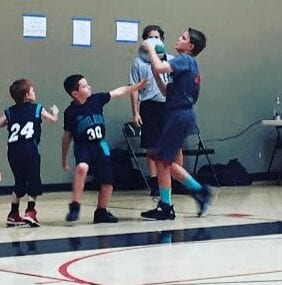 So we lost. And lost. And lost. And, at times, it was quite frustrating. In the opening game, against the Warriors, we were down by 20 when their coach decided to full-couft press—a truly bullshit move. In practices Jim and I repeatedly talked about boxing out and fighting for rebounds, only to watch our kids listlessly stand still and watch the ball during games. No exaggeration: There were sequences when the opposing club would get five, six, seven rebounds in a row. Were I blessed with more hair, I’d have yanked it out. Perhaps the lowest moment came a few weeks ago. I was speaking with the coach of Warriors, and he noted that he was down to five players, and wondered whether I could spare one of ours. So I did the right thing and sent out an e-mail, asking our parents if anyone wanted to jump to the other local team because they were on the verge of not being able to play and that would be terrible and … blah, blah.

A day later, a mother replied, saying one of her son’s closest friends was on the Warriors, and they could carpool, and it’d make life easier.

But here’s the thing: With or without Dylan, we were out-manned every game. We had the least talent and the least experience of all the teams. And we still … busted … ass. The kids played hard, never gave up, fought, fought, fought. When we lost by 28, the following practice was as peppy and fun as when we lost by 10. Best of all, we actually started to improve. You could see it—slowly at first, but then the knowledge and athleticism began merging. Davis, a non-basketball player pre-2016, brought forth inspired defense and shut down an opposing team’s scorer. Nick started driving the lane with authority. Tyler, our leading scorer, would pump fake, dip his shoulder, twirl and spin toward the hoop. Braedon rebounded ferociously. Ashton, nicknamed “Kobe,” really learned to handle the ball and harass opposing dribblers. Perhaps no player brought greater satisfaction than Liam, a teddy bear of a boy who simply wasn’t born with the snarl gene. At the start of the year, Liam was a basketball mess. You’d ask if he understood, he’d nod—then do the exact opposite. Gradually, though, he picked it up, gained confidence, even took some shots and fought for some boards. He’d have moments of absolute splendor, then smile and look for his parents in the stands. Those flashes—quick as a blink—reminded me why I volunteered to coach. Joy.

As for Emmett, he broke his ankle two weeks ago on the trampoline, and missed the last three games. Which didn’t take away from my pleasure of spending time with him. This childhood thing—it flies past, day into night into day into night. The moments together, shooting hoops, talking strategy … priceless.

As I noted above, today was our last game, and we lost.

Before adding Dylan, the Warriors had the league’s two best players. Now they had the league’s three best players. So I came up with a defensive strategy. The past two weeks, we ran a system that, while simple, worked quite well: We’d play a triangle and two—meaning three guys in a zone, and two guys defending man to man against the other club’s best scorers.

For this game, I decided we’d double team the Warriors’ star (a tall kid who scores from everywhere), put another man on the Warriors’ second star, have our top rebounder (Nick) play the low paint and our top perimeter defender (Kobe) attack the ball up high. And—amazingly—it worked. We out-scored the Warriors in the first quarter, and we were outscoring them in the second quarter. It was, truly, magical. The parents were cheering, the kids were pumped, the opposing coach seemed genuinely perplexed. It was as if, in those minutes, everything we practiced came together, and we were—genuinely—a team.

One of the referees, a well-intended man who hadn’t done a game at our level this year, stopped the clock and demanded we play strict man to man. I have not argued one time this season. Hell, I don’t believe in arguing with refs, or yelling at refs. They get paid crap money to work weekends and help kids. But … well, I asked for a time out and said, “I don’t understand. We haven’t had this rule all year.” They took a moment, pulled out an NJB rule books (one I’d never seen) and cited some regulation about having to play man. This was our third time facing the Warriors, so I said to the other coach aloud, “Man, you agree with me that this is silly right?”

I knew he would support me.

Hell, he had my best player on his roster, as well as a new kid (a very good new kid) who materialized from thin air. Surely, he’d support my cause.

“My kids are fine playing man,” he said.

So we played man—a defense we haven’t tried one time this season. And, suddenly, the Warriors were carving us up. The lead jumped to six, then 12, then 15, then 19. We just didn’t have enough talent to keep them at bay forever. By the final period (the league plays five periods—for reasons I’ll never understand) we were worn down, outgunned, out-coached, over-matched.

But not beaten. We continued to scrap, continued to push. And as the final seconds ticked off the clock, I found myself overcome with pride and admiration. That initial scouting report from the early practices could be ripped up and thrown out the window. Now, 2 1/2 months later, I can think of a single word I’d write beside the name of every Gatorsaur player: 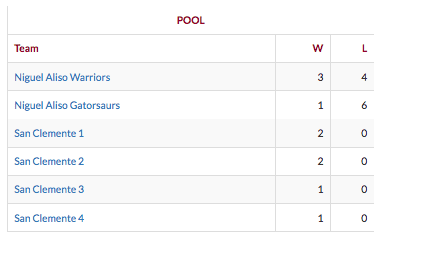