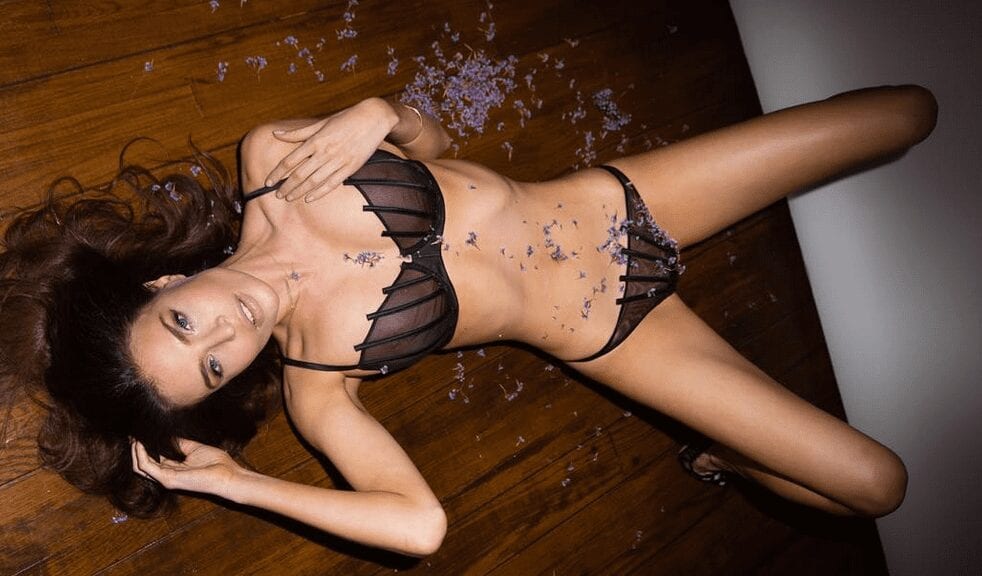 I’m not a big model guy.

That doesn’t mean I don’t respect the business, or find impressiveness in those who make it far.

It’s just, well, I don’t give models much thought. They’re (generally) tall, skinny, angular and decked out in next season’s fashions. They walk runways, make sexy expressions and pose suggestively. I’ve been around my fair share of models dating back to Sports Illustrated, and well, they just sorta exist.

First, Julia is smart. And insightful. She not only excels at the profession, but likes explaining it to others. She’s one of the biggies in the fashion world, but still has time to be Quazed. Which is cool.

Julia Lescova, who needs the Swimsuit cover? You’re the Quaz.

JEFF PEARLMAN: OK, Julia, I’m thrilled to have you here, and to be able to ask you this question. My daughter is 12. She’s extremely tall for her age, blonde, with blue eyes, rosy skin, fruit punch lips, etc. I’ve had m-a-n-y people say, “Does she model?” And, to be honest, I’d rather her dig ditches filled with dog excrement. Here’s why: I hate the idea of her being judged for her looks. I hate the idea of men drooling over her half-naked pictures. I hate her feeling pressure to weigh 98 pounds at 5-foot-10. Tell me (and, I swear, I have an open mind), why am I wrong?

JULIA LESCOVA: Well, your daughter is a very lucky girl to have such a protective father. One thing about me, my mom raised me and my brother alone. My father left us when I was 2 and he died when I was 18. I never had a father and he was never around. My mom had to work out of the country when she left her teacher’s job, to survive for our family. It wasn’t easy in post-Soviet Latvia to raise two kids. I started working when I was 15-years old and traveling and making money all over the world at a young age because that was my way to survive first and then it became my career. American models have it much easier and not with as much struggle. I’m sure it would be much more fun for your daughter and you would be there to protect. But if she has a choice, I would rather recommend that she go to college and get a degree. Nothing is better/sexier than educated and beautiful women.

J.P.: In 2011 you were the face of Guess, replacing Kate Upton. Which is really cool. How did that happen? Like, for all of us who have no clue, how does a model go about landing a really sweet, huge gig?

J.P.: Back when I was a young up-and-comer at Sports Illustrated, one of the “perks” was getting to escort the models to the Swimsuit Issue premiere party. One thing I remember is the number of models who smoked cigarettes. I mean, tons upon tons, upon tons. Which struck me as sorta weird, because in print and video you are portrayed as the models of health. Why, Julia, do so many models smoke? And do you think it has changed at all?

J.L.: I don’t smoke. Never did. I don’t really know many models who smoke. But I think back then maybe they did. It was at a time when all models were skinny and smoking helps staying skinny, I heard. They also didn’t eat much to stay skinny. So it was coffee, no food, and constant smoking. Not any more. Before an image didn’t have to be as healthy as it has to now. Maybe you are referencing models from the 1980s and 90s. Nowadays it’s not as prevalent. It used to be cool to smoke. Now with all the new studies it’s now became not cool to smoke. Kind of unattractive.

J.P.: I remember, back when I was in elementary and junior high, the tall girls weren’t actually the ones boys were interested in. Even if they were gorgeous—I think there was probably something intimidating about dating someone taller than you, blah, blah. Anyhow, was that your experience? Were you “the tall girl”? And, since we’re back in time, you were 15 when you left Latvia for Los Angeles. That must have been terrifying, no?

J.L.: Yes, tall girls are intimidating, indeed. Many models I know were “awkward” as teenagers, as was I. Too skinny, too tall, too awkward, too long feet, too skinny toes. I was the last of all to start hanging out with boys. 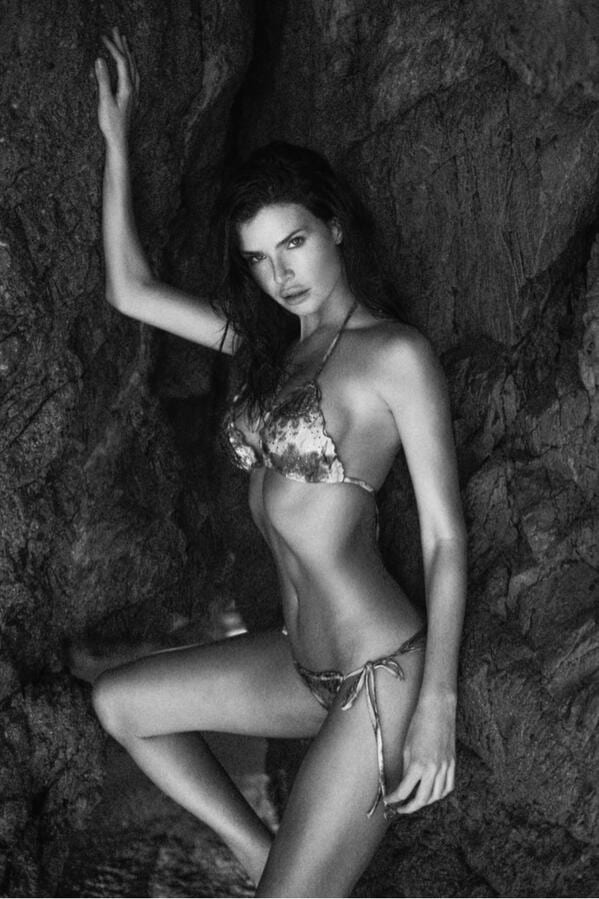 J.P.: I’m going to be really blunt, and I hope it doesn’t offend you. It seems there is a face all female models must master. For lack of better words, it’s the “Let’s have sex right now” face. Lips pursed, eyes slightly narrowed. And yet, I’m a 43-year-old man who has had his fair share of sex (hell, I have two kids as proof), and I’ve NEVER gotten that look. Like ever. So, Julia, A. What the heck is the look? B. Do guys ever get that look? C. And why do you think it’s equated with sexiness?

J.L.: Every guy deserves this look. Lol. I’m sorry if you never got one. Or maybe you never paid attention? I’m sure guys do get this look. As for the why of it—well, doesn’t it make you feel something, looking at the gorgeous girl with that look? That’s sexy, so it’s equated with sexiness.

J.P.: I was at Sports Illustrated when Tyra Banks became the first African-American woman to grace the Swimsuit Issue cover. It was talked about quite a bit at the time, in terms of breakthroughs and such. I’m wondering, do you feel there are different standards/expectations/prejudices for models of color, ethnicity? Is a model a model a model, or does race/ethnicity still come into play?

J.L.: I don’t think any longer. Before, unfortunately, for sure. It’s all changed, history changed. A hot girl is a hot girl. Always. No matter what color/ethnicity. I think. Great for Tyra Banks to have that breakthrough. I think it was some window opening of every ethnicity beauties.

J.P.: Whenever I read profiles of beautiful women, it seems they always talk about wanting “just a normal guy” who loves “the simple things” and “good conversation.” But then, upon further review, it seems the famous end up dating the famous, the beautiful end up dating the beautiful, and the world’s 300 million nice, middle-of-the-road guys go home lonely. Do the models you know only date hot guys? Or do we schlubs have a shot?

J.L.: Hahaha this is funny actually. At the end of the day, it’s all just about the chemistry. Whoever the guy is and whatever he does. Energy that pulls you two together and doesn’t let you separate from each other. I think it’s energy from God and it’s meant to be. You grow together and grow into each other. It depends where you look. You find that chemistry with someone. Sometimes it can come as an accident that you are not prepared for. And another time certain people plan it out and look for it in certain places. It depends what you “planned” for yourself. That’s how they find beautiful to beautiful, successful with successful, actor with actress, model with musician or whatever. It depends where you hang out, I guess. I don’t plan these things and I’m just prepared for the gift from God. Not searching. It will come when it’s supposed to. 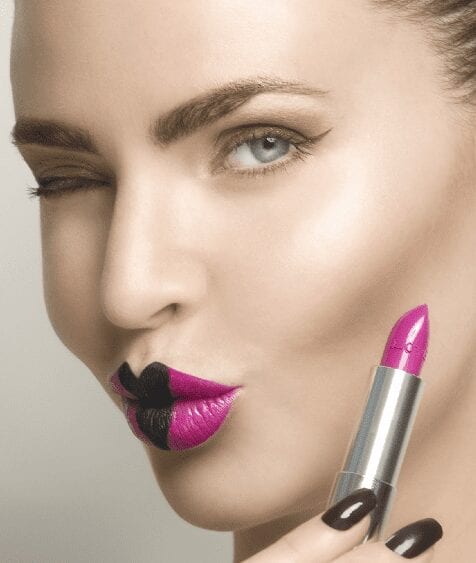 J.P.: This is random, but … I grew up with a beauty mark on my face. It was one of those 3-D ones that kids make fun of, and I had it removed years ago. But as a kid it made me miserable. And I vividly recall wondering why no one in magazines like People and GQ have moles, beauty marks, scars, etc. Now, obviously, I’m aware of the myriad powers of digital editing. I wonder, Julia, do you think it goes too far? Or do you think this is all sorta fantasy, and there’s nothing wrong with trying to present visual perfection in a magazine?

J.L.: Someone’s imperfection can be someone’s trademark. Isn’t it what Cindy Crawford’s mole became? Lara Stone has huge gap between her main two teeth. Trademark. And I find it sexy. A mole can be sexy, too. It’s however you represent it. If you are shy/embarrassed of it, it will show like an imperfection. And if you love yourself the way you are and you are confident, and actually find that imperfection as different, cool—you can turn it into trademark. Like, scars on men can be extremely sexy. Story telling. It’s unique. Different. However you look at it.

J.P.: What’s the best part about your job? Like, when are you at your absolute highest/happiest?

J.L.: Working with great, motivated, inspired, creative people with vision. Sometimes moving onto different projects with them and building friendship with them. Creating beautiful images that last forever, almost like creating image history. I’m the happiest when I see the final image that I’m in love with. That took effort (or no effort) to create together with a team of great people.

• You were on the Shahs of Sunset in 2012. How did that happen?: I just passed by a friend’s house when they were filming.

• Have you ever thought you were about to die in a plane crash If so, please elaborate: No, never thought of it. My flights have been pretty smooth, thank God. I feel very protected by my angels.

• You walk past a construction site and someone whistles. How do you respond?: Ignore

• My therapist says I worry too much. Any advice?: The therapist should help you 🙂

• You get a call from Hugh Heffner. He wants to pay $400 million for you to star in his upcoming Playboy original film—“Naked Models Romp on a Beach Naked for 90 Minutes.” Do you consider it?: Nah.

• One question you would ask Matt Harvey were he here right now?: Who is Matt Harvey?