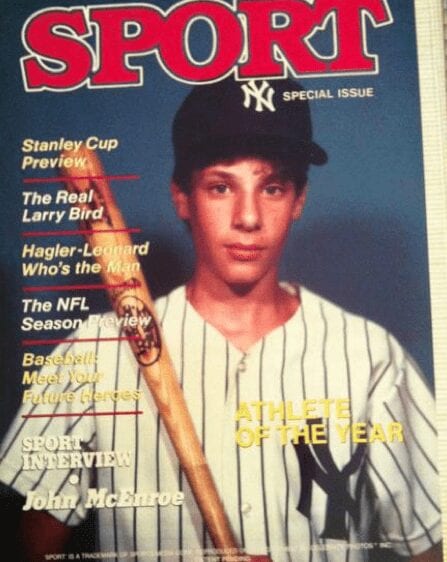 I’ve debated writing about this for a long time. I really have, because it’s one of those stories that is told with whispers inside the Pearlman household during family gatherings. But, since I just wrote about my daughter’s Bat Mitzvah, I’m gonna take a minute to tell you of mine …

The year was 1985. I was 13, and had spent a bunch of my life preparing for the big day. We lived in Mahopac, N.Y., and my folks booked the Mt. Kisco Holiday Inn for the event. Everything would be held there—service in one room, shindig in another. It was pretty enormous, because I’d never had a big party (or day) in my honor.

We sent out the invitations. Maybe 100 people were invited. Perhaps 110. That sorta range. We hired a band—five Israeli guys with instruments. I bought a bunch of 45 records to hand out as prizes for games. There would be a cake, a candle-lighting ceremony. All that stuff. I probably invited 15 friends from school. Chris Supa gave me a Stray Cats record. John Ballerini wore a suit and work boots. I sat next to Gary Miller, my neighbor and closest pal. I had a crush on a girl named Jackie Zisblatt, but she couldn’t attend.

Officially, we had a three-part schedule for the day. First, the actual Bar Mitzvah ceremony with Rabbi Michael Trachtenberg (a sorta mopey dude with a handlebar mustache). Then, a cocktail reception in the hotel bar, featuring a stringed quartet Dad had found and hired. Finally, the actual party in the hotel ballroom. Although it took place 31 years ago, I remember the day very well. Dancing with my mom. Talking with my Cousin Arthur—my boyhood hero who left early to play golf. Playing jump-over-the-limbo-stick and nearly cracking my skull. I recall the feeling of emptiness when the party concluded—guests congratulating me and my inner voice screaming, “Wait! Wait! All this work … and it’s over? What the fuck?”

Now, here’s the awkward part; the factor that goes unspoken. Because I was a 13-year-old boy who loved Ken Griffey, Sr., NFL posters and playing tackle football in the Gargano’s yard, I knew nothing of social graces. Literally nothing. So it wasn’t until years later that I realized my parents had invited some of the guests only to the service and cocktail reception and most of the guests to the service, cocktail reception and party. Meaning (if it’s not clear) you had some folks receiving one invitation (Cocktail reception to follow …) and others receiving a different invitation (Cocktail reception and banquet to follow …). Only the people invited solely to the cocktail reception could not have known there was also a banquet—until they noticed everyone retreating to a party they weren’t invited to. I actually have this awful memory of Jimmy McDonnell, a kid from up the block, saying to his mother, “Wait … why can’t we go to the party, too?”

To say I’m haunted by this is no exaggeration. I’ve never fully understood what my folks (amazing parents, amazing people) were thinking. But I have to believe somewhere out there, someone still hears the Pearlman name and thinks, “Holiday Inn bullshit.”

And they’d be correct.