My Case Against Donald Trump 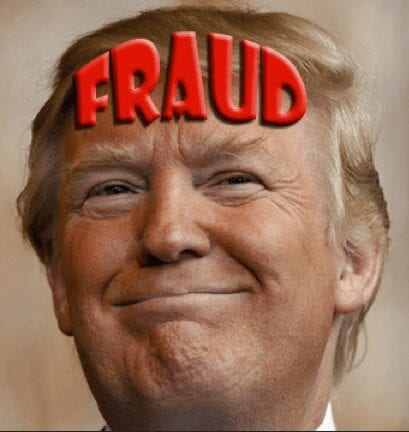 I have been thinking much about the rise of Donald Trump of late, but I’m tired of obsessing, worrying, fretting. So I just want to say something, and then I’ll try and (editorially) move on for a while. It won’t be easy, but—again—I’ll try. Because this isn’t healthy.

Hence, for one/all of the above reasons (or for another reason I missed), you plan on voting for Donald J. Trump as the 45th president of the United States.

I am here to offer my reasoning why this is, to be blunt, fucking insane.

First and foremost, Donald Trump is a con man. I don’t write those words lightly, or to be flip or snarky. No, he is a con man, in the way many televangelists are cons; in the way street corner shell game operators are cons. I know … I know—”But fucking Hillary is the biggest con of all!” No, that’s not true. Is Hillary Clinton an overly ambitious political monster? Yes. Is the e-mail thing fucked up? Yes. Did she defend a husband who deserved no defending? Yes. Are you right to be upset over the way Benghazi was handled? Yes. But Hillary Clinton, at her absolute worst, is your typical paint-by-numbers bullshit politician. She desperately wants to be president, and a ton of her actions through the years have clearly directed her toward that goal.

This, without a doubt, is true. And it’s the reason so many (myself included) find her indigestible.

Were Donald Trump merely indigestible, I’d be OK with him. No, I wouldn’t agree with many of his policy positions. But through the years, nearly all of our high-ranking leaders were indigestible. John F. Kennedy cheated on his wife. Lyndon Johnson’s decision making resulted in the deaths of thousands upon thousand in Vietnam. Richard Nixon was a crook. Gerald Ford pardoned a crook. Jimmy Carter couldn’t get the hostages out of Iran. Ronald Reagan got the hostages out of Iran, but ignored the AIDS epidemic and illegally sold arms to Iran. George H. Bush promised no new taxes—then raised taxes. Bill Clinton received office blow jobs from a 23-year-old intern, then lied about it. George W. Bush used false intelligence to lead us into Iraq in the aftermath of 9.11. On and on and on and on—look deeply enough, every political hero and anti-hero has his/her shit. It’s a guarantee.

Trump, though, doesn’t merely have his shit. He is pathological, in the way insane asylum inmates are pathological. And I’m not just referring to a perpetual changing of positions that would make John Kerry seem steady (Not long ago Trump was pro-choice, now he’s pro-life; Not long ago Trump was pro-gun restrictions, now he’s anti-gun restrictions; Not long ago Trump praised Hillary Clinton as a wonderful secretary of state; now she’s the worst woman to walk the planet). Nope, I’m talking about stuff that would straight-up murder the political ambitions of any other political candidate walking the United States. For example, five years ago Donald Trump bragged that he was about to prove Barack Obama was not born in the United States. He bragged of having people on the ground in Hawaii who were about to bring forth shocking incriminating material. Then (poof!) the talk vanished. He just dropped it. Why? Because it was all a lie. Or, to be perfectly clear, Trump was lying about a sitting president of the United States being unqualified to hold the job (Compare this in scope to the Dixie Chicks, a country music group, slamming George W. Bush). Or how about this one? Last July Trump mocked Sen. John McCain, a Vietnam POW, because he was captured. “He’s not a war hero,” Trump said. “He’s a war hero because he was captured. I like people that weren’t captured, OK? I hate to tell you.” This would be rich enough had a young Donald J. Trump not dodged the draft. As the Smoking Gun reported, Trump’s draft number was 365, and when it was drawn on Dec. 1, 1968, “18 months after Trump graduated” from the Wharton School, Trump “had already received four student deferments and a medical deferment.” Again, for clarity, Donald Trump ridiculed John McCain for being captured during a war he (Trump) opted not to fight.

This goes on and on. A few days ago, during a speech out here in California, Donald Trump said the drought—the worst in modern state history—does not exist. I live here. It exists, and it’s terrifying. He also recently said that global warming is not real—which is funny, in that he cites “global warming and its effects” in a recent permit to to build a sea wall designed to protect one of his golf courses. To repeat: Donald Trump is telling voters he does not subscribe to climate change, while simultaneously subscribing to climate change.

Donald Trump says he is on the side of struggling Americans. He says this over and over and over again. But when asked in 2006 about the potential for a collapsing of the real estate market, Trump said, “I sort of hope that happens because then people like me would go in and buy.” One year later, Trump told the Globe and Mail that he was “excited” about the housing market plummeting. “I’ve always made more money in bad markets than in good markets.” Again, Trump supporter, think about this: Donald Trump was rooting for people to lose their homes, because he would make a profit. Think about that twice. Three times. His stated excuse in recent days: He was simply a businessman eyeing an opportunity. Seriously.

• Donald Trump ridiculed his Republican opponents for taking money from outside sources. Literally, on Oct. 15, 2015 he Tweeted, “Sheldon Adelson is looking to give big dollars to Rubio because he feels he can mold him into his perfect little puppet. I agree!” Then, on May 13, Trump Tweeted, “An incredible honor to receive the endorsement of a person I have such tremendous respect for. Thank you, Sheldon!” He is now taking donations from Adelson—after saying he would never do such a thing. Back in February, Trump ripped Jeb Bush for receiving money from Woody Johnson, the New York Jets owner and heir to a pharmaceutical fortune. He said the relationship would prevent Bush from negotiating for lower prescription-drug prices. “I don’t get any money from any of these special interests, and I know the special interests—I know them better than anybody,” Trump said. “But I don’t want their money.” Johnson is now vice-chair of the Trump Victory Fund.

• Donald Trump is a billionaire New Yorker who often cites the 9.11 attacks in his speeches. In the aftermath of 9.11, he did not make a single charitable donation to any of the not-for-profit groups that provided aid to survivors, rescue workers, or the families of cops and firemen who died trying to save others, Internal Revenue Service records show.

• Donald Trump repeatedly cites his love of veterans. In 1991, he wrote letters trying to deny disabled veterans a chance to make a living.

• Last November, during a rally, Trump said he witnessed “thousands and thousands” of people cheering in Jersey City, N.J. as the Twin Towers fell. They were, he insisted, Arabs. There’s only one problem: According to Jersey City Police Dept., this never happened. Never happened. He made the entire thing up, and linked to an article at the Infowars website, run by Alex Jones, who has argued that the U.S. government was behind the attacks. Trump has also pledged that, when elected, “you will find out who really knocked down the World Trade Center.”

Hell, let’s roll. Donald Trump said Ted Cruz’s father was involved in the John F. Kennedy assassination—based upon a National Enquirer story. In January Donald Trump told people at an Iowa campaign event that he raised $6 million for veterans groups, including a $1 million donation from himself. It turns out the figure was $4 million—and Trump had not donated a cent. Donald Trump repeatedly says that Vincent Foster, a Clinton associate was murdered—despite myriad investigations concluding that his death was a suicide. Back during last year’s Ebola scare, Trump Tweeted, “Ebola is much easier to transmit than the CDC and government representatives are admitting.” That was: A. Proven incorrect; B. Batshit crazy. Trump has repeatedly insisted that vaccinations result in autism. Tweet 1: “Healthy young child goes to doctor, gets pumped with massive shot of many vaccines, doesn’t feel good and changes — AUTISM.” Tweet 2: “So many people who have children with autism have thanked me — amazing response. They know far better than fudged up reports!” Incorrect and dangerous. Trump Tweeted that black criminals are responsible for 81 percent of homicides against whites. This was: A. Incorrect; B. Material supplied by a white supremacist source. When Antonin Scalia died, Trump said, “They found a pillow on his face, which is a pretty unusual place to find a pillow.” Not true—and insane. Donald Trump says he opposed the Iraq War—he did not. Donald Trump says he never supported universal health coverage—he did. Trump used to disguise his voice and pretend to be his own publicist. He lied about doing so. Then admitted he did so. Now lies about it again. Back in 1986, Trump said under oath that the NFL offered him a franchise. This was, too, a lie. Donald Trump’s Trump University was a scam of the greatest degree. It’s truly jarring how he ruthlessly took money from people hoping for lessons of success, then offered garbage.

I can be here forever. I don’t want to be here forever. Again, I understand if you don’t like Hillary Clinton; if you loathe Hillary Clinton. But Donald Trump is not the answer. He is a fraud; a con; a person who will say anything to anyone. This is not the same as most politicians, who will say some things to some people. No, Trump will tell folks exactly what they want to hear in the name of being elected. If you disagree with him, he calls you stupid, or calls you a liar, or calls you corrupt, or mocks your looks. He has seen that blaming the media works with his followers, so he blames the media—even when they’re right. He does not answer charges—he bashes those making the charges. And folks lap it up.

He is the third-grade bully brought to adulthood, and he somehow has convinced many of you that bullying is OK. That America NEEDS a bully.

Well, we don’t. We need a president.

Not a con man.