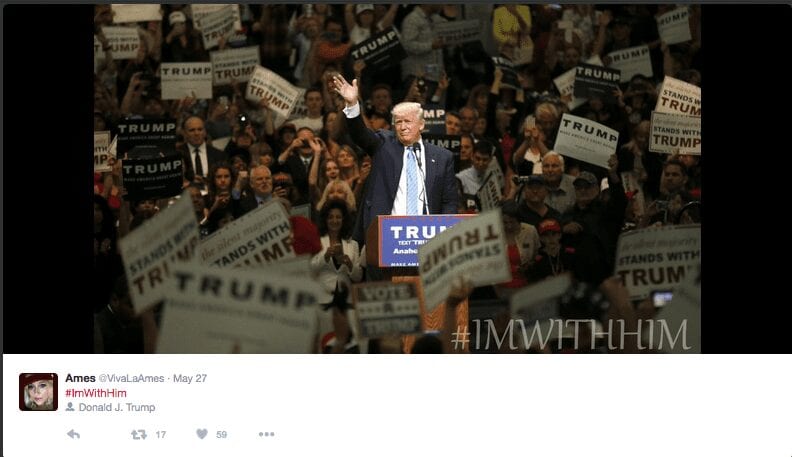 So I absolutely love having guest posts here at jeffpearlman.com—whether I agree with the people or not. Yesterday I engaged in a brief Donald Trump Twitter debate with Amy Moreno, and after a few words I invited her to state her feelings here (specifically, we were discussing my blog post, titled MY CASE AGAINST DONALD TRUMP). To my great delight, she accepted the invitation. Amy, who writes under the pen name “August Steele,” is the author of “Wrinkles.” She’s a senior writer at Truthfeed.com and loves pugs and Game of Thrones. You can follow her on Twitter here.

Amy, show us what you’ve got …

I remember seeing images of the massive crowds of people at Obama rallies and thinking, “These idiots belong in a cult.”

Who gets that excited over a friggin’ politician?

Fast-forward about seven-and-half-years, and while I still believe that anyone who supports Obama is a “sucker,” I have a much broader and deeper understanding of what that movement represented. It’s like that saying goes, “Don’t judge what you don’t understand.” And truthfully, right or wrong, most people who criticize, do so from a place of ignorance or narrow-mindedness.

I liken it to a sports game. When you’re on the playing field, you have a vastly different panorama and experience than the guy who’s sitting in the nosebleed seats.  People like me who criticized the Obama movement some eight years ago were doing so from the cheapest seats in the stadium – screaming obscenities at the players on the field because we thought we “knew better.”

And maybe we did.

I could sit here and argue all of Obama’s failures until I’m blue in the face, using cold hard facts, tangible examples, and Obama’s very own words to prove my point – and I’d be right – or would I?  Nowadays facts are subjective and open to “interpretation” or “spin.” It’s not about absolutes – it’s about perception.  It’s as if perception trumps truth (pun intended).

Nowadays so-called “truths” are based on your opinion of someone or something. Good, bad, or indifferent it’s your reality, so make of it what you will. It’s like having your very own built-in “safe space.”

The wussification of America—but that’s a different piece for another time.

Trump’s critics attack him and his America First agenda using that very “perception strategy.” They define him, his supporters, and the movement based on what they see from their vantage point, perched high above the playing field.

The good news is that this is normal social behavior. Humans have always been compelled to speak with absolutions and authority on topics we don’t fully comprehend – it’s a lot of conjecture mixed with a helping of sentimental fluff, combined with predisposed convictions. The result is something that resembles truth on the surface. However, peel back the top layer and what you find is shameless hyperbole.

Which leads me to why I’m here today …

In a strange stroke of cyber luck, my Twitter path crossed with Mr. Pearlman, who as you may know, is a robust anti-Trumper. He shared his scorched-earth anti-Trump piece with me and dared me to tell him “where he went wrong,” as if I would read it and be rendered speechless by it’s “truthiness.”

That didn’t happen, by the way.

I read Mr. Pearlman’s piece, which was well-written and passionate. However, I didn’t learn anything new.  He used the same stale talking points that nearly every anti-Trumper uses—Mr. Pearlman was just more eloquent in his delivery.

However, all compliments aside, Mr. Pearlman was wrong on almost every point (except trashing Hillary—he got that right).

He incorrectly stated that the Trump movement is grounded in anger, and then went on to accuse Mr. Trump of being “anti-veteran” just because he doesn’t embrace panhandling. I disagree with panhandling as well.  The businesses Mr. Trump spoke of did not sign up to be societies “social justice warriors.” Likewise, homeless vets deserve better than begging for loose change in front of stores.  Thankfully, Donald Trump has a comprehensive plan to assist our nation’s forgotten vets which will add up to a hell of a lot more than pocket change.

Interestingly enough, it’s these sort of baseless attacks that are indicative of perception-politics. I “feel this way” so it “must be this way.”  This way of thinking leaves little room for impartiality.

In the spirit of broadminded debate, I’m here to destroy Mr. Pearlman’s skewed perception of Donald Trump—yet we all know that won’t happen. In reality, Mr. Pearlman asked me to refute his piece because he thinks I can’t.

For me, the Trump movement is not about anger.  I am an avid Trump supporter, and I am not running around punching puppies or kicking baby strollers. On the contrary, like most Trump supporters I know, I’m full of hope because I believe that Donald Trump’s America First strategy will help a lot of people who have been screwed sideways by years of neoconservatism, progressive bullshit, politically correct rubbish, and job-killing globalization.

When I think of what lies ahead for this country, I get excited. I am eager to put Americans first with comprehensive, fair trade, safe and secure borders, a strong military, and an economy run by a businessman with an impressive 97 percent success rate.

I’m a “big picture” kinda girl—I don’t get stuck in small, irrelevant places, bogged down by tedious details which have little, if no impact on my daily life.

Speaking of tedious details—do I care that Trump has evolved on issues?

I was pro-choice five years ago. I’m pro-life today.

Truthfully, though, this entire “Trump debate” isn’t about his stance on abortion or his past “praise” of Hillary. It’s about people like Mr. Pearlman who simply don’t like Trump’s personality.

That’s all it is.

He’s not everyone’s cup of tea.

He’s bombastic, loud, and can come off as pushy.

But the picture is so much bigger than that.

I don’t like my neighbor Joe very much—he’s condescending, snobbish, and effeminate. I’ve got bigger balls than he does, and that bugs the shit out of me. However, I don’t misconstrue his words or actions and spin stories about Joe, so they fit my bias agenda and then call it “truth” and challenge others to prove me wrong.

That’s not my style.

People have a right not to like Trump’s personality, just like I have a right to my opinion that Obama is more interested in apologizing for American exceptionalism and shamelessly pandering to foreign nations versus putting America first.

And please don’t get me started on Hillary—we’d be here all day.

There’s no question that Donald Trump is pushing buttons and challenging the status quo; he’s a threat to politically correct safe-spaces that many people hold sacred.  However, what’s incomprehensible are the wildly incorrect statements regarding his business success.  For example, citing four bankruptcies and “Trump steaks,” as legitimate examples of “failure” is an absurd argument made by people ill-equipped to discuss matters of high finance. It would behoove these folks to visit Donald Trump’s website and evaluate his business portfolio.

The people who judge Donald Trump, and call him a “con man” or a fraud remind me of Monday morning quarterbacks—out-of-shape couch surfers belching up useless analyses for highly-skilled professional athletes.

No offense to all you “high financiers” out there, but the sort of business Donald Trump conducts on a daily basis is beyond the realm of what average people can comprehend and in many cases that very fact renders you unqualified to critique him. Once you’ve created a fraction of what he has built, we’ll talk. Until then, your criticism and claims of “fraud” are conjecture based on a skewed perception.

Donald Trump is one of the greatest luxury real estate developers of all time, and he employs thousands of hard-working American people. Whether you love him or hate him, Donald Trump is a proven success within the private sector.  His “go big or go home” mentality has its risks – billionaires “wheel and deal” in ways we can’t fathom. Donald Trump’s rare failures coupled with his countless victories make him more suited to run this country. Because life is uncertain, and if you can source success from failure, you’re ten steps ahead of the game.

The Trump movement is not about “Hitler” or hatred – it’s not racist or xenophobic, or whatever other “trigger words” you want to attach. It’s a revival of a bygone era when average Americans believed they could attain the American dream and who celebrated the exceptionalism of this great country.

Supporters of the Trump movement see him as an inspiration – a bridge over the troubled waters that lead back to a hopeful America filled with promise and prosperity.  Furthermore, he’s a personal inspiration to many who believe they too can achieve greatness through hard work and dedication.

I started this piece by mentioning how I eventually came to understand the Obama movement—I think it’s apropos to end on that same note.

After eight years of Obama, in what I would describe as “hell on Earth,” I am finally at a place where I understand how the people who disliked George W. Bush felt when he left office—and what the promise of “hope” meant to them. It means the same thing to me—only this time I’m part of the game. I’m on the field, overwhelmed by the extraordinary energy and the hopeful chants of “USA! USA! USA!” from my fellow patriots, as we cheer Donald Trump to victory—and as the stadium explodes with excitement, I glance up and see you. You’re seated where I sat some eight years ago, high up in the nosebleed seats. You’re frustrated as hell, and screaming obscenities at the players on the field because you think you “know better.”

But more than likely you don’t.