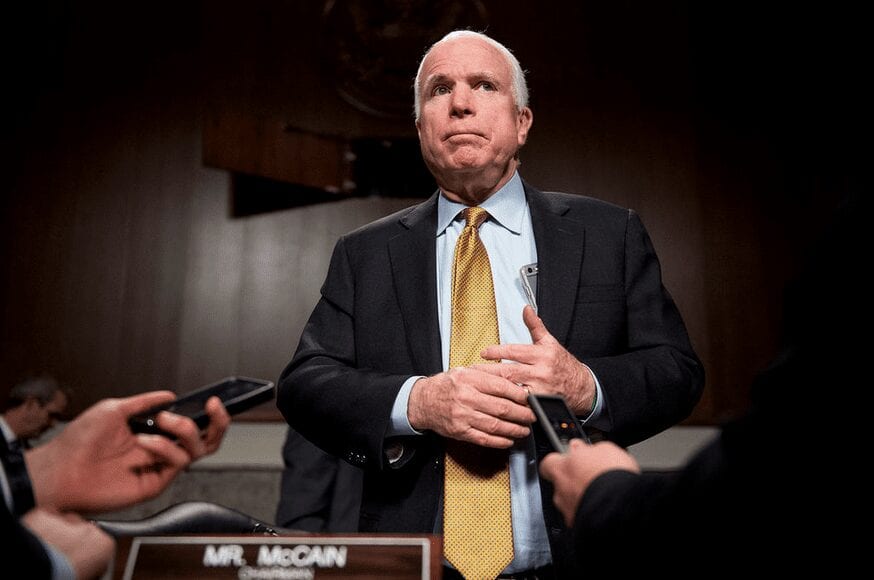 I used to love you.

I really did. Remember when you used to make regular appearances on the Daily Show, and you were funny and self-deprecating and willing to dig into both Republicans and Democrats? Remember when your No. 1 issue was campaign finance reform, and you crossed the aisle to work with others who shared your concern?

There are political figures I love and political figures I despise, but no political figure confuses me like you do. I suppose it started when you selected Sarah Palin as your running mate, although I actually give you a pass for that one. You were desperate, and a bit confused. You saw Palin—pretty, popular, young, enthusiastic—and thought she might be the lightning bolt you needed against Barack Obama. Alas, she wound up a disaster. But it’s a mistake others could have made. I suppose. Sorta. Maybe. Eh … not really. But that’s OK.

Anyhow, I’m really lost. Several months ago, after you (rightly) criticized Donald Trump, he responded by mocking you and your time as a Vietnam POW. His exact words—”I like people who weren’t captured”—were beyond disgusting, beyond disturbing, beyond wrong. They were hateful ridicule slung at a man (you!) who served his country with honor and valor. So how did you—the self-anointed maverick—respond? By endorsing Donald Trump.

Again, you endorsed Donald Trump. A man who ridiculed POWs. A man who led the movement to prove a sitting United States president wasn’t a citizen. A man who demeans women, the disabled, immigrants, Muslims, Mexicans; who has shown little-to-no understand of foreign policy. Senator McCain, you not only worked with Hillary Clinton—you repeatedly praised her. Don’t believe me? Here …

In 2013: “Her work as secretary of state, with the exception of this issue of Benghazi — which isn’t going away — I think has been outstanding. I think she would be viewed by anyone, Republican or Democrat, as a very formidable candidate for 2016.”

I know you disagree with her on many issues. I know you’re still angry about 2008. But you know—like, 100-percent know—Donald Trump cannot be president. You know she’s 1,000,000 times more qualified; 1,000,000 times more reputable. You know he’s an ignorant draft-evading piece of shit who bilked tons of people with his fake university.

Senator McCain, you know this.

So why are you acting like a guy off his meds? I have two theories:

• 2. You’ve lost your way. You’re in a shockingly difficult re-election fight, and you think your fate rests in the hands of your party’s most dogmatic members. So, certainly, supporting Hillary Clinton is out. But so is slamming Donald Trump. You need to back him, because his biggest fans are the voters you require to survive.

But here’s the thing: You’re killing yourself and, even worse, your reputation. You’ve a been a reasoned, respectable man for so long, and you’re throwing it all away for … what? Another term? More love?

I used to love you.

That was long ago.

PrevPreviousPeter Gleick
NextThe one thing everyone must do in lifeNext