Guns and Courage and Cowardice 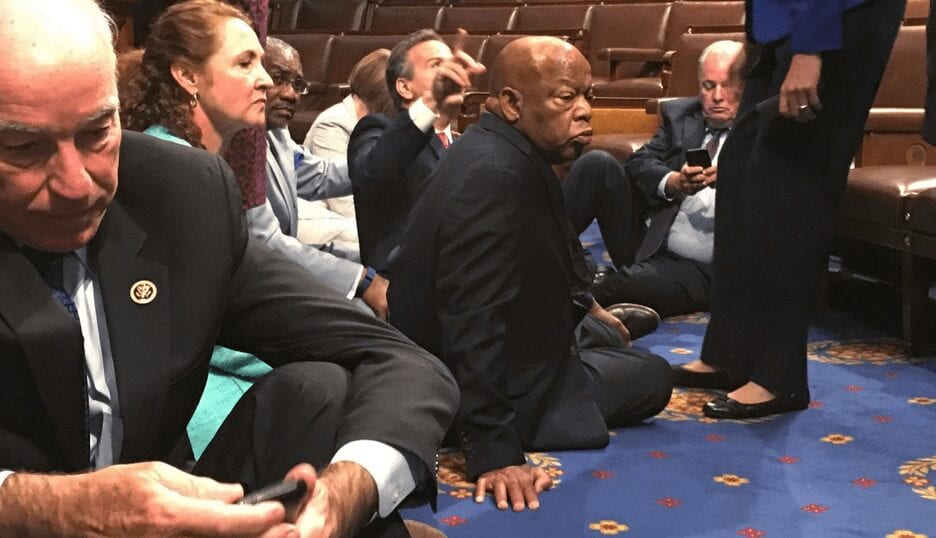 When I drop my kids off at school, I oftentimes wonder whether some crazy person with a gun will shoot them.

I picture it in my head: A bunch of children standing around, waiting for the bell to ring, when POP! POP! POP! POP! I get the call. I rush back to the school. There are people crying. There are piles of bodies. Police. Rescue workers. Priests. Rabbis. And there, lying motionless, is one of my children.

It is my greatest fear.

Of course, because we are America, and because so many of our Republican political leaders are paid for and owned by the National Rifle Association, we do nothing about gun violence. Columbine happens—nothing. Virginia Tech happens—nothing. Sandy Hook—nothing. South Carolina—nothing. Orlando—nothing. The tragedies occur with jarring regularity, the president gets angry, people talk of change. For a moment, it seems like logic and reason will capture the day. And then, ultimately, the NRA reminds its puppets who’s manning the strings, and we go back to blaming mental health; go back to saying we actually need more guns; go back to the nonsense; go back to Tweeting about Taylor Swift and Derrick Rose and the Kardashian’s latest bullshit. It’s us, as a people, at our worst. There have been nearly 100,000 gun deaths in the U.S. since Newtown 3 1/2 years ago, and we remain in an eternal holding pattern.

Now, I’m not saying anything is about to change, but today—for a rare, glorious moment—I spotted people at their best. A large number of Democratic representatives held a sit-in on the House floor, demanding votes on gun-control legislation. The scene was pretty bonkers—flustered and agitated Republicans standing to the side as their Democratic colleagues sat, sang, bellowed, fought. Hell, it’s still going on as we speak, and I couldn’t be prouder. The leader is John Lewis, the civil rights era icon who asked, bluntly and powerfully, “Do we have the raw courage to make at least a down payment on ending gun violence in America?” Meanwhile, Paul Ryan—the GOP speaker—gaveled the House out of session so C-SPAN cameras could not broadcast his party’s slavery to the bullet. It mattered not—cell phone videos told the story.

And here’s what gets me: All this isn’t about a vote. It’s about allowing a vote. In other words, the Democrats aren’t protesting the Republicans voting against gun safety. They’re protesting the Republicans not even allowing for a vote on gun safety. And why is this happening? Two reasons: A. The NRA doesn’t want anything related to gun restrictions to touch the planet; B. With elections coming, a large number of Republicans do not want to be on record voting against sensible restrictions, such as more thorough background checks or the ol’ assault weapon ban. So, instead of leading, they cower and hide and accuse Lewis and Co. of grandstanding.

Only it’s not grandstanding.