This thing on my head 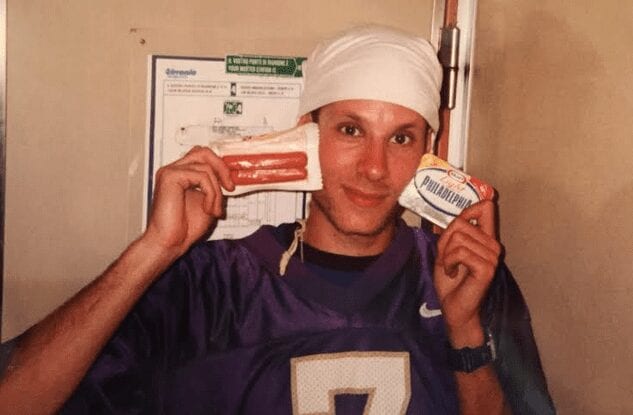 Earlier tonight we drove out to the LA Count Fair, which is one of my all-time favorite events.

While walking up and down, here and there, I found myself behind a kid whose pants were practically dragging down to his shoes. They were ludicrously big and ludicrously low, and I thought to myself, “Why the hell would anyone do that? It just makes no sense.”

Then, a few minutes ago, I stumbled upon the above photograph. It’s me, in 1999, on my backpacking journey through Italy and Malta. I’m on a boat, wearing (inexplicably) a Brock Huard Washington Huskies jersey and (even more inexplicably) some sort of tattered T-shirt wrapped around my head.

I’d love to pretend the tattered T-shirt was some sort of joke. Perhaps my effort at Halloween on a boat. But, eh, it wasn’t.

You see, back in the summer of 1999, I thought this looked cool. I don’t recall why. Maybe I was heavily into pirates. Or tattered T-shirts. Maybe I thought it reduced the size of my watermelon-like forehead. Maybe some ballplayer wore a tattered T-shirt around his skull during BP. Whatever the case, I can’t imagine what others thought, seeing some guy in his 20s looking like … well … like that.

So, please, feel free to wear your pants as low as possible.