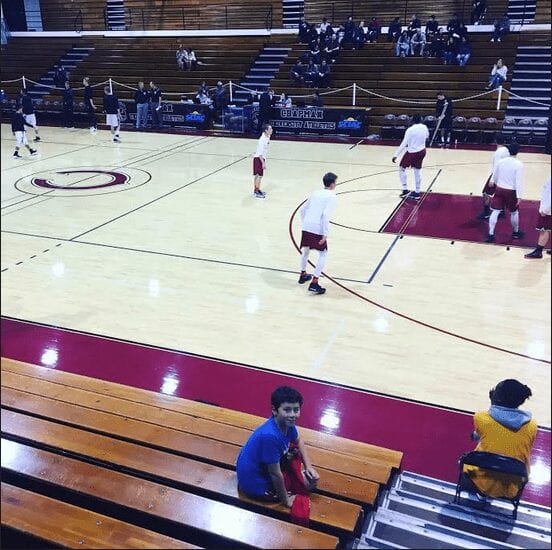 The son and I enjoy taking in college sporting events, only tonight there were no Division I basketball games being played in the area.

Although I’m an adjunct professor at Chapman University in nearby Orange, Cal., I know little about the athletics program. We attended a football game last semester, and I think one or two past students played sports. But, otherwise, I’m relatively naive.

The game began at 7. Apparently it usually it costs $10 to attend, but since Chapman is on break, and expectations for people showing up were low, there was no charge. Upon arriving, Emmett and I learned that the Panthers would be facing West Coast Baptist College, a school we had never heard of. According to the free info sheet distributed on a folding table outside of the gym, West Coast Baptist is a member of something called the NCCAA (National Christian College Athletic Association). They’re based out of Lancaster, California, they love Jesus and, in 26 previous contests against Chapman, they’re 1-25.

I’m an atheistic Jew who teaches at Chapman—yet the son and I were quick suckers for the Eagles. Why? Let’s count the reasons:

• 1. Scrap and spunk: Though its players might disagree, there was no chance WCBC was winning this game. None. They were smaller, slower and less-talented than Chapman. The Panthers’ starting point guard, a sophomore wiz named Reed Nakakihara, was the most talented player on the court—and it was painfully obvious. But even as the margin went from 10 to 20 to 30 to (yikes) 40. WCBC’s players kept at it. They dove, they lunged. In short, they busted their (in a word none of the players would likely use) asses.

• 2. The Eagles have a senior guard named Nakwon You. He barely played, and when he did play it wasn’t of much note. But Nakwon You is right there with Spencer Dunkley and Laron Profit and Exree Hipp and Mouse McFadden and all the other marvelous names sports have brought us. Or, put different, were I starting a band tonight, I’d name it Nakwon You. And we’d rock.

• 4. Levi Tyrrell is a 6-foot-4 senior forward who really did it for me and the son. He hustled, he jostled, he had a bunch of nifty moves around the blocks. Best of all, he sorta looks like the guy you’d see playing pickup. In fact, were this a Division I or II school, he would be the guy playing pickup. That’s the beauty of this whole thing. Levi Tyrrell is playing college basketball in a small gym, in front of 60 people, out of love for the game and—I imagine—love of team. It’s a precious gem.

• 5. Sloppiness. The Eagles were sloppy. But good sloppy. Chapman’s players all wore the same black Nikes. But WCBC’s kids were decked out in whatever kicks mom and dad bought. Some were gray, some were black. Some were striped, some were solid. The socks, too. One kid wore neon. Another one stole my fifth grade tubers. I’m not making fun—I loved it.

The final score was Chapman 100, West Coast Baptist 62. The teams could play 100 times, and Chapman probably takes, oh, 98 of the meetings.

But you know what? It matters not. The Eagles lost a game, but gained two fans.

That’s basketball at its finest.