The eerie parallels between President Trump and USFL owner Trump

So earlier today, while researching my book about the United States Football League, I was digging through old clips about the 1985 championship game. It featured the Baltimore Stars and Oakland Invaders, and was played in a rainstorm at Giants Stadium. The Stars won on a seven-yard touchdown run by a halfback named Kelvin Bryant.

The matchup was the league’s final showing before a planned move from the spring to the fall, where the USFL would directly square off with the NFL. The change was engineered exclusively (and passionately) by Donald Trump, owner of the New Jersey Generals and, even in his late 30s, an absolute gangster who could lie and manipulate and cajole with the best.

Anyhow, Trump got his way, because Trump always gets his way. He was able to convince the majority of the other owners (wealthy older men with detailed business backgrounds and records of success) to follow him to the fall, even though it was against their own interests (If you own a spring team in Denver, for example, and you move to fall, you’re now going head to head against the Broncos—in their stadium. Which you no longer can use. Good luck with that). He also pushed them to oust Chet Simmons, the anti-fall commissioner, and replace him with Harry Usher, who would—Trump rightly believed—do as he said.

There’s no exaggeration. It all happened.

While researching that title game, I came across this article, written by an Associated Press reporter …

What it says, basically, is that on the day of its final spring game, the USFL had absolutely no fucking clue how to move to fall. Trump’s initial idea (Fall football! Fight the NFL!) was big and bold and boastful and headline-generating. But when it came time to implement, he was clueless. He had never devised a plan; never considered the intricacies and complications; never discussed details with other owners. He certainly failed to consider the lives of hundreds of USFL players, coaches and team employees who would—best-case scenario—be out of work for 14 (or so) months.

The parallels between Trump in the USFL and Trump as president don’t stop there.

Need an example? In 1985, Trump signed Doug Flutie to quarterback his Generals. It was pure ego—the team already had a quality signal caller in Brian Sipe. But Flutie had just won the Heisman Trophy, and Trump’s ego demanded the little QB with the big heart and neon name come to New Jersey. 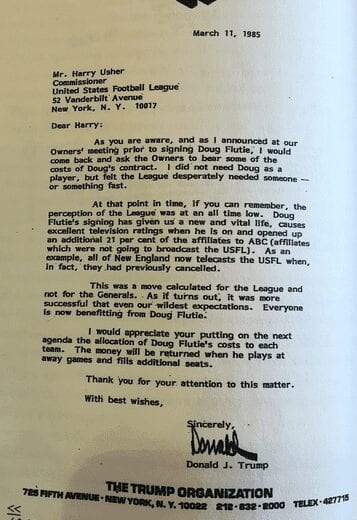 Now, the lie in the letter is that Trump had previously told the owners they would help pay. That’s simply untrue; a deceit. The first time Trump’s peers heard about contributing to Flutie was after he became a General.

The owners never paid a cent for Flutie.

Mexico will likely never pay a cent for a wall.

Here’s another gem—if the USFL had a singular enemy, it was the NFL. The old league did not merely want the USFL to fail; it actively sought to bring it down. Sooooo … it was a bit odd that, without informing any of his fellow owners, Trump arranged a private meeting in a Manhattan hotel suite with Pete Rozelle, NFL commissioner. The topic? How could Trump ditch the USFL and land a New York-based NFL franchise. (This is not speculation, for the record. Or a guess. I’ve interviewed well over 400 people for the project. It’s also a subject Trump later discussed under oath—and lied about). Rozelle could not have been less interested in having a business relationship with Trump, much as Vladimir Putin likely feels about him now. But if he could use Trump to the NFL’s advantage … well, that would be, ahem, nice.

Myerson was a complete disaster, as was the lawsuit.

It’s a familiar story of a conman asked to produce.