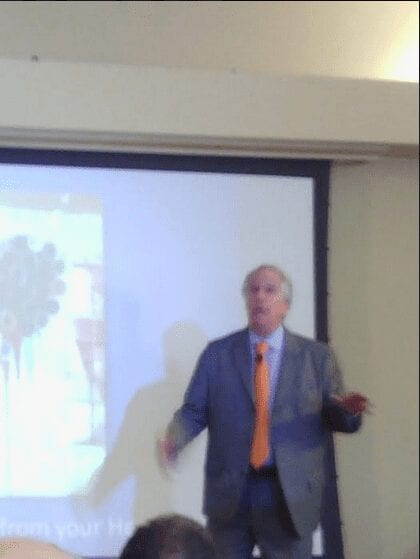 We are living during the most divisive period in modern American history.

You want Muslims banned. I don’t.

You want to tell the evil empire of Australia to fuck off. I don’t.

You think Trump is a genius. I think you’re smoking crack again, Albert.

Through all the awfulness, the anger, the ridicule, the scorn, I do believe there is one thing all Americans can agree upon: That the above photograph, taken by my dear mother, is the worst picture that has ever existed.

In case you’re wondering, Mom and Dad spent the evening at a lecture featuring (Please choose) …

A. My Uncle Marty.

B. Some sort of suit-wearing Sasquatch.

E. The propped-up remains of Dave Thomas, founder of Wendy’s.

The answer, you probably didn’t guess from the dazzling imagery, was D—Winkler. Also know as the Fonz. Also known as a guy who’s credited on Wikipedia as being a native of my hometown (Mahopac, N.Y.), even though he only summered there on very rare occasion. His talk, the rents said, was fantastic, and worth the price of admission—though I think it might have been free. Or not.

The point is, one must work to take a photograph that’s this … special. The blurred right arm. The gurgling facial expression. The special App used to make him look bald. All that space atop his dome.

PrevPreviousEddie Murphy, 34 years ago …
NextNo social media for one weekNext