In February of 2000, I found myself at the Seattle Mariners’ spring training complex in Peoria, Arizona, covering the goings-on for Sports Illustrated.

During a break in the non-action (spring training is lovely, but far from exciting) I headed over to the team store to pick up goodies for friends and families. And that’s when I saw something absolutely mind-blowing. Hanging on a rack were, oh, 20 game-used jerseys from members of the 1999 club who were no longer on the roster. There was Mike Blowers and David Segui and Matt Mieske and, best of all, Butch Huskey. Oh, and each one was selling for $50.

I say “best of all” for Huskey because: A. He spent considerable time with my hometown Mets during the non-glory years of 1993-98; B. He always seemed like a nice guy; C. He was one of the few remaining players allowed to wear Jackie Robinson’s No. 42 (which was retired in 1997; but those already using the digits could keep them).

So I plunked down the $50 and bought my own Huskey No. 42. The real Butch Huskey, meanwhile, wrapped his career that season, dividing time between the Twins and Rockies before vanishing into the retirement abyss that engulfs most non-superstars.

I’ve probably worn my Huskey jersey, oh, 15 times around the house through the years, but not in a while. Then, a few months ago, Butch Huskey’s profile popped up on my Facebook feed. I added him as a friend, and he accepted. 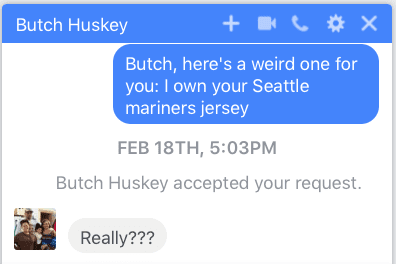 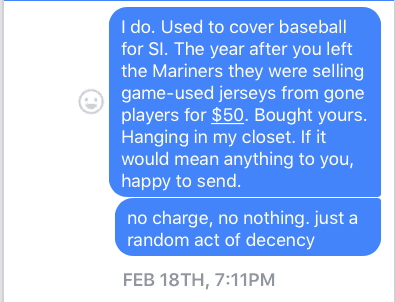 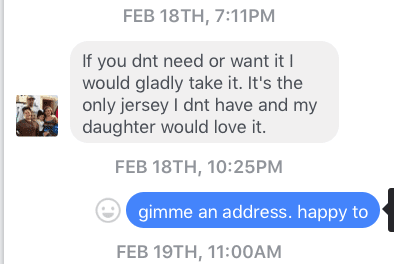 Anyhow, tomorrow I plan on hitting the post office and returning the garment to its rightful owner. I’m sad to say farewell, but happy to do what’s right.