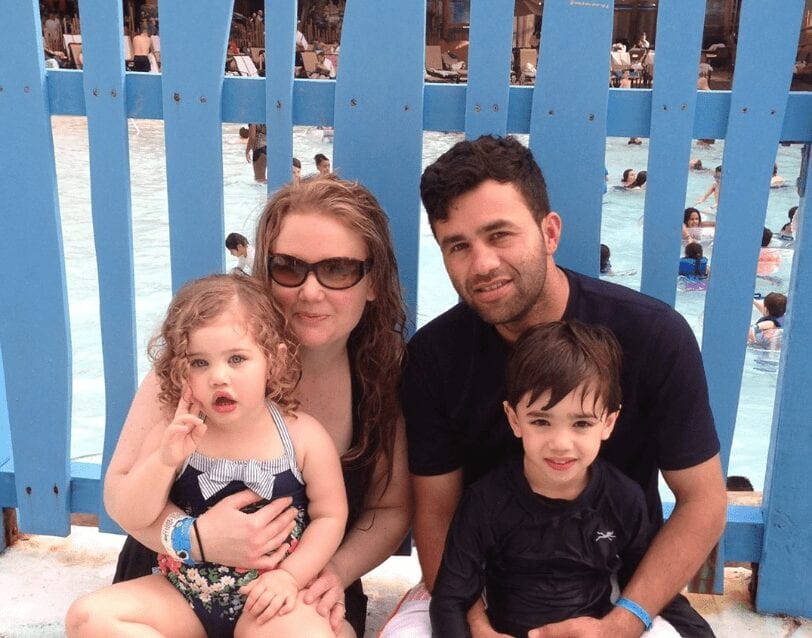 This is a Facebook post from someone named Samantha Colindres. If you’re happy about this, or proud of Donald Trump’s behavior on issues like this, well … look in the mirror. Long for a long time.

Disclaimer: If you are a Trump supporter or his immigration reform, please do not comment on the below with your judgmental thoughts. Until you personally have been effected by him, your opinion or support of his matter is just hurtful.

For those of you that really know me, know I do not post much of FB and when I do its the usual cute kid pic. I don’t put much out about there about myself or my family because despite my outgoing personality I am actually quite a private person. THIS ENDS TODAY.
Today, July 20th, 2017 will forever be the worst day of our lives. Today, my husband, my best friend and father to our amazing children has been issued to deport the country in 28 days….all thanks to President Trump. And for those of you who want to jump in and defend the President or these laws, think again. You don’t really know the full story or what he is really doing until you have lived it yourself. For those that may say Joel broke the rules, he should go….keep that judgmental nonsense to yourself or just go ahead and delete me all together because frankly I don’t need that kind of racist negative influence in our lives(BTW this is taking all of me to not fill this post with an abundance of curse words).
I’m sure none of you know the struggle we have been living for there past 7 years since we got married. We have tried since then to do things “the right way” and about $25,000 later, we are no better off. This immigration game is all about how much time and money you are willing to spend sometimes. Really. Thats it. Until TRUMP came about. Say what you want about Obama but during his time he created the Family Unity act in which his mission was to not separate families due to immigration policies.
After we were married we filed a I-130 which took about a year to get approved. After that we had to file other waivers,one to reopen his case in Texas and get it moved up here to CT. Once that was done we followed all the other steps to a T, each year sending in every detail of our lives to ICE and USCIS from all our birth records, medical, SSN’s, job letters, bills, taxes, basically imagine every private detail about your life you somehow have to encapsulate in documents and send away for someone else to review. All was going well, we were making moves in the process, Joel had his residency in works and work permit filed. Last year we were granted a stay which basically allows you more time to work on your case while you check in with ICE annually. These ICE check ins are normally no big deal……until 2017 came and Trump took over.
If you’ve been out of the know, Trump didn’t give orders to deport the “bad hombres.” He gave orders to “deport them all.” And i’m not exaggerating. Our lawyer has a memo that was sent to him from ICE with these exact words.
So we go to ICE for our check in on May 25th to be told they don’t have his file and come back in two weeks. Ok, don’t have his file when you made the appointment date? Or just a game you are playing because his stay (meaning they can’t touch him) expires(expired) on June 1st. So of course they want him back then so they can touch him then. I’m on to you. We went back early June to be told again no file to come back in July. All the while our lawyer is guiding us that we will be ok, Joel has too much equity in the US. So this 3rd time we went in less anxious than the past two times. We sat there for three hours till the entire room was cleared. People who came in way after us were being called first…..my gut told me then and there something was up. I knew they were waiting to the room was empty so I couldn’t cause a scene. I was right. ICE officer came out and handed us a denied letter that says it cannot be appealed and he has to leave by 8/17/17.

Cue devastation, tears, collapsing and yelling. And let me tell you these ICE officers have zero heart. They laughed at us after they escorted Joel to another department to get an ankle bracelet to wear for the next 28 days. Yeah bc he’s a big time criminal. A man that’s been living here for 13 years with the same job and partner. A man who has paid taxes all 13 years that he won’t see a cent of in SSN bc he doesn’t have one. A man that has never had so much as a parking ticket. A man thats a father of two. A man that owns his own home in CT and works 6 days a week and has NEVER taken a sick day even when a jack hammer went through his foot he was back at work on crutches the following week when he could have been sitting at home collecting worker’s comp. A man that completely changed my life for the better in every way. A man who’s faith inspires me daily.

So Trump and Trump supporters, tell me more about how Trump is helping american citizens by deporting my husband? Tell me how Trump is going to help THIS American Citizen and her two American children live when her husband is deported? Tell me how it will help the country when this family is broken up, goes broke because we have lost the second income and i’m left here to pay for our home while raising our two kids and working a full time job? Tell me you will pay my bills, my mortgage, my daycare, my car insurance? Tell me how to comfort my children at night when daddy isn’t here? Tell me what story i should tell them that doesn’t completely mess them up and their futures? Does Trump really think I’ll stay here alone and separate my family? NO. I’m not an idiot. So then tell me, how great it is to take my kids out of the US away from the only life they’ve known, friends, school, family, education and healthcare? Tell me all the handwork we have done working our asses off to buy a home in a nice town with good schools was all a waste? AND TELL ME HOW THE HELL ANYONE CAN FIGURE OUT ALL OF THIS IN 28 DAYS? Tell me YOU could get your life all flipped upside down and then fixed again in 28 days. Tell me after my husband leaves that I’ll be here alone to sell our home, pack it all up and move internationally just like that? While working full time. While being the only parent. Tell me more about how all this helps the American people?? In fact, wouldn’t it be quite the opposite…….wouldn’t this country loose out on a man that has paid his taxes? How abut once he leaves and I can’t afford this all on my own, how going on welfare and state aid will help our country? Because I’m really dying to know this thought process of such a racist, prejudicial man who operates his regimen like a madman who forgot to take his meds, really works out for the American people.
I close with this…..please don’t comment if he followed the laws none of this would have happened. You are in fact quite wrong. ICE is chaotic scene with people who literally told us “We have no say in the matter, we are just following the new administration.” If you want to see real change, please join me in this fight. We need to rally all we can against this. If you’ve followed any news stories you will see the more noise you make, the more change you can create. I have already been in contact with Senator Blumenthal, Chris Murphy and Elizabeth Etsy. Unfortuntaley they couldn’t help earlier because they said we can’t intervene until something bad happens. Well something did today. And I’ve called out to them for help as I do all of you. If you are against this injustice please support us next week at a protest at ISAP at 330 Main Street, Hartford, CT. Please join us to fight on 7/27/17 at 10am if you believe in REAL change. We have reached out to multiple media outlets and just need one to pick this up to make a splash. It worked for a man in Derby, it can work for us to. I have to believe it because I don’t believe in my government anymore, I believe in the PEOPLE of this country. Please join us and send your thoughts to Trump, call him out on Twitter, share this post to all you know and make it go viral. I’ve made it public so please share!! We have nothing to loose at this point and all to gain. We are begging you all for help to make a difference and i won’t stop fighting till my voice is heard #SaveJoelColindres