New rule: You can’t be anonymous and call others cowards 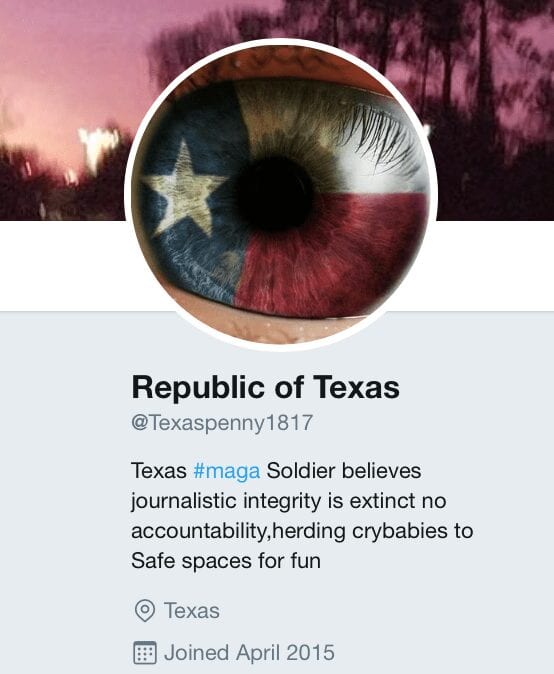 This snowflake is scarred for life or world of his moms boyfriend’s diddled him jeff’s got major daddy issues https://t.co/sPKobirGdb

Take a moment and read up on @Texaspenny1817. It’s both educational and informative. At first, one might think he is a soldier, and thereby worthy of respect and admiration. But, no, he’s a “#maga Soldier”—which means he’s a soldier in the army of a five-time deferred, refused-to-pay-contractors, created-a-fake-university-to-bilk-students-of-their-money, donated-nary-a-dime-in-the-9.11-aftermath conman. He also believes “journalistic integrity is extinct”—and states this (again) without using his actual name. Which makes one question (wait for it … wait for it) his integrity, and also reminds me of the greatest single line in the history of Naughty By Nature.

But wait … there’s more. Again, our boy @Texaspenny1817 believes “journalistic integrity is extinct”—then fills up a solid 80 percent of his timeline with material from un-cited charts and diagrams, news sources that aren’t news sources and (best of all) Hannity.com.

This is what the Internet often resorts to these days. Keyboard tough guys run the landscape, bring down the dialogue, throw the mud and muck—while pathetically hiding in the shadows of anonymity.

PS: Oh, one more thing: You’ve been on Twitter for more than two years and you have 68 followers? Perhaps the message ain’t resonating.