Rayshawn Jenkins and the randomness of a child’s favorite athlete

So back when I was a kid of, oh, eight or nine years, I stumbled upon this 1981 Topps baseball card … 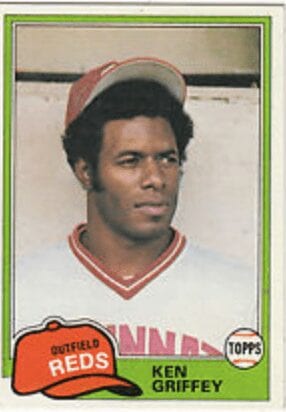 At that moment, Ken Griffey became my favorite professional athlete. Why? Because look how insanely smooth the guy is. Hat hanging back on a sick Afro; thick sideburns that scream, “Fuck off! I’m cooler than shit!”; a facial express that oozes, “Yup … and?”

I was, truly, sold—and throughout the remainder of his long career I was a no-holds-barred Griffey guy. Knew his birthday, knew his hometown, knew his stats, nearly cried when the Yankees sent him to Atlanta for Claudell Washington and Paul Zuvella. Why, if one takes a quick scan through my high school yearbook, he’ll find endless Griffey references. Like, oh, this  …

My point, though awkwardly made, is that there is no rhyme or reason for why most kids select a favorite athlete. I mean, sure, many pick a Mike Trout or LeBron James because of their unparalleled greatness. But an equal (if not greater) number are wooed by hair, or tattoos, or a kind word at an autograph signing, or a Bleacher Report story, or a shared birthday or hometown or favorite ice cream flavor. It can be anything. Everything.

Which leads me to Emmett, my 10-year-old son.

A few weeks ago, while attending a Los Angeles Chargers practice, Emmett and I decided we should root for a rookie defensive back named Rayshawn Jenkins. Why? Well … um … eh … I’m not entirely sure. Emmett thought his name was really cool. I thought he looked to be playing particularly hard. He’s one of 16 siblings, which is amazing, and he’s from the east coast—as is our entire family. Also, he’s young, but not first-round-pick young. What I mean is, as a guy selected in the fourth round, Jenkins is fighting for a roster spot. Nothing is handed. We dig the struggle.

Anyhow, tonight, while attending the Seahawks-Chargers game, Emmett focused 90 percent of his attention on Rayshawn Jenkins. “He’s in!” Emmett bellowed on multiple occasions. “He’s in!”

When Jenkins made a sideline tackle, Emmett shouted out a loud, “Yes! Rayshawn!”

It was cool, and as we exited the stadium I asked, “So, why are you a Rayshawn Jenkins fan again?”