Donald Trump, Alabama and Give the Ball to LeRoy

For those who missed this, Donald Trump was in Alabama tonight, speaking at a rally in support of a senatorial candidate named Luther Strange.

In front of several thousand people at the Von Braun Center in Huntsville, the 45th president decided to throw the rawest of red meats toward his white, arch-conservative audience, taking on the NFL players who dare kneel during the national anthem. Here is what the commander in chief of the United States of America said: 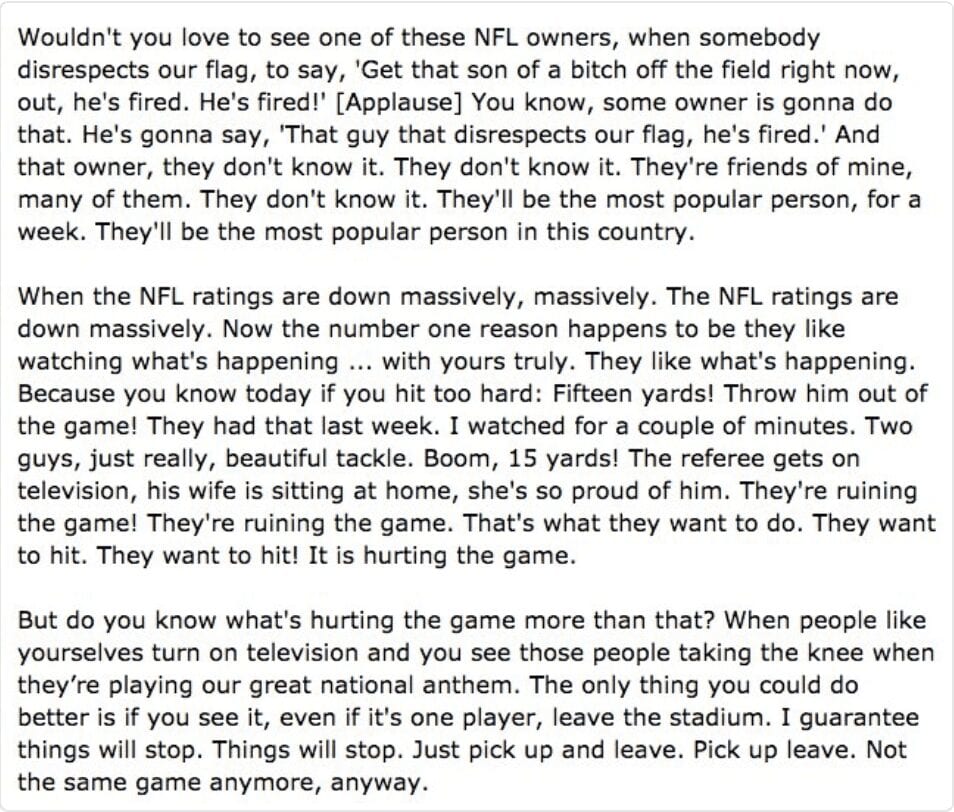 It doesn’t take a PhD or psychic to read between the lines here. And, as proof, I’m neither a PhD nor a psychic. But I can tell you exactly what this is: The loudest dog whistle in the history of modern presidential dog whistles. Louder than the Lee Atwater-inspired Willie Horton ads. Louder than Ronald Reagan’s assault on welfare recipients. Louder than Sarah Palin referring to Barack Obama as “Barack Hussein Obama” in speeches.

This was, to be blunt, the president of the United States saying to a 99.9-percent white, southern audience, “Look at those uppity fucking n—–s. Who the fuck do they think they are?” He didn’t use the n-word, but he didn’t have to. The message was as clear as the hair atop his head.

It also is nothing new. Back in the days after Brown v. the Topeka Board of Education, when southern high schools and colleges gradually began to desegregate, the adopted line of white southerners was, “Just give the ball to LeRoy.” This was uttered and uttered and uttered again. It was uttered in Mississippi, in Tennessee, in Arkansas, in Kentucky, in Alabama. And it meant: “Look, it sucks that the n—–s are in our schools. But the big n—– sure can run. So, if he’s gonna be here, we might as well use him.” This way of thinking passed as a certain level of tolerance and acceptance. Could LeRoy date your daughter? Hell no. Use your toilet? Hell no. Complain about … anything? Hell no.

But he could run the football just fine.

I assure you—do not doubt what I’m saying.

Do not pass it off as exaggeration.

And the people are cheering.