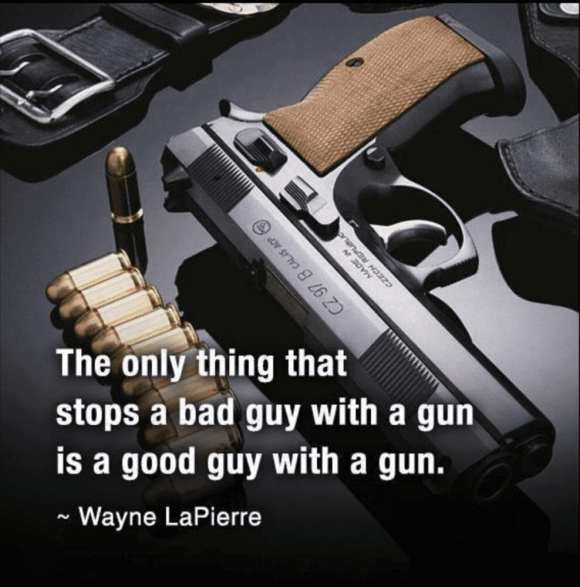 If you’re an adult humanoid living in the United States of America, you’ve doubtlessly heard the above quote.

It’s the NRA’s absolute go-to talking point. We can’t get rid of guns, because … wait for it … the only thing that stops a bad guy with a gun is a good guy with a gun.

Well, a Twitter pal named Marty Smith just made an excellent point, RE: the tragedy in Las Vegas. Where was the good guy with a gun?

Seriously, where was he? The event took place in a pro-gun state; a state with ridiculously lenient laws influenced by NRA-owned political figures. The murderer was firing from a high-above window, so surely someone walking by his room could have … eh … um … shot him? Or something? Like? Eh? That?

The venue itself didn’t allow firearms. Which made sense then and makes sense now. Because let’s say people start hearing bullets. Then they pull out their own guns. Then the police show up. Only nobody knows who’s firing, because the assassin is in a hotel room in the clouds. So people see pointed guns and mistake others for being the killer. Which leads to more killing. And more killing.

A good guy with a gun is good. Unless you don’t know he’s a good guy.

Then, in all probability, he’s dead.

One reply on “So where was the good guy with a gun?”