Aaron Schlossberg hides behind an umbrella 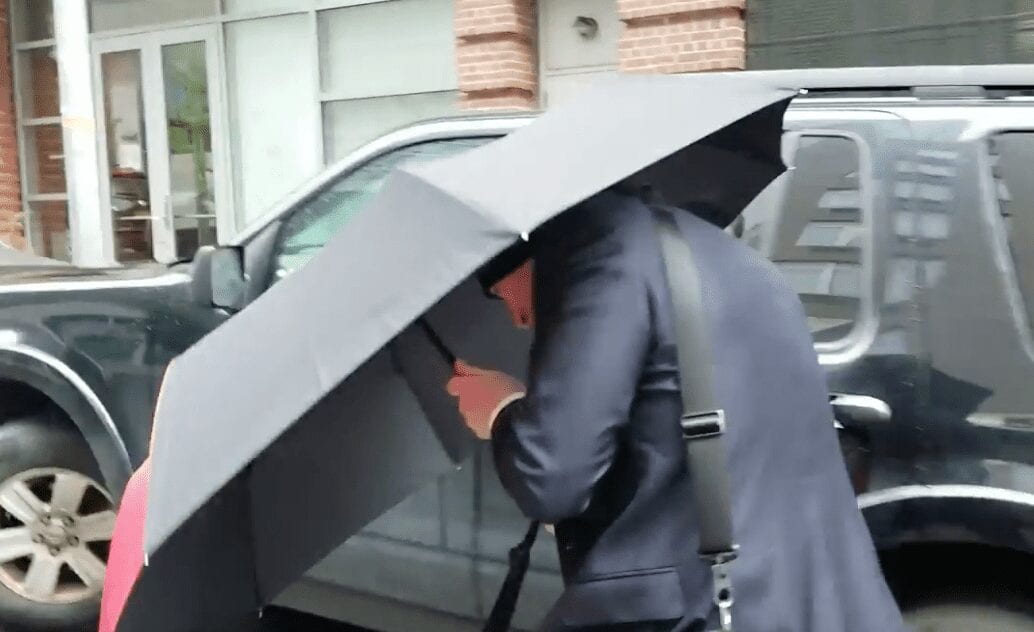 In case you missed this gem, Aaron Schlossberg went into deep hiding today—behind his umbrella.

The disgusting, gross, nasty, hateful, bigoted New York City-based attorney made waves two days ago, when he went off on several Spanish-speaking employees at a Manhattan eatery. The video—caught mid-rant—went uber viral, and in a matter of hours ol’ Aaron was the talk and sight and sludge of the information superhighway. He was trending in New York and Chicago, in Los Angeles and Atlanta, in Detroit and Miami.

Everyone was talking about Aaron Schlossberg, and the talk was not kind and fuzzy. It turns out he has past experience of being an asshole, including this gem from a pro-Trump rally a bunch of months back.

But here’s the best part (and why, come day’s end, I love the Internet): There’s no more closet for guys like this to hide. There’s no shadow; no little corner of the world where he can spew hate and remain cocooned. I’m sure, pre-May 2018, Aaron came off as this respectable attorney, here for the needs of his clients. He’s young, handsome, well-educated, properly groomed. Were you (or I) to meet this guy in regards to a case, I’m sure he would have made a strong impression.

There’s a part of me that wants to feel badly for people like Aaron Schlossberg. I mean, his career is probably done. His reputation is ruined. Sure, he can move to Mississippi, open a small practice and fit right in. But in the world of high-flying Big Apple business, it’s over. His name is cancer. Worse than cancer. Liquid shit in a blender. So, as a human, that strikes me as sad.

But then I think about it. I really think about it. This man planned on calling authorities to have people deported—based on their language. Think about that. Lives ruined. Families torn apart. Jesus, I don’t even like complaining about, oh, a dirty table at Starbucks, for fear that someone might get reprimanded. And this trash would have gladly seen existences destroyed.

So now, to see him cowering beneath an umbrella, dodging the press, crying about the unfairness of it all … well, fuck him.