So tonight was my terrific father in law’s 75th birthday party inside the senior center he calls home. There was steak and carrots and soda and cake and about 25 guests between the ages of, oh, 75 and 100.

One of those was Jim Kadin.

He was sitting at a long table, three down from the end, and as I pulled up a chair and began chatting with the myriad people, Jim seemed quiet and a bit disinterested. The retired dentist spoke of teeth, the retired secretary spoke of typing. The guy from Boston spoke of the Red Sox. Jim mostly listened, until everyone was done and an awkward silence took over as MC. That’s when Jim sorta cleared his throat to inform me that while he was born in Chicago, most of his life has been spent in SoCal. He told me he was, for six years way back in the day, a byline-deprived correspondent for United Press, and that he covered the Dodgers’ first season in Los Angeles. Once I got past Sandy Koufax, though, the recollections grew foggy.

Then he told me he was, once upon a time, a backup linebacker at USC. A single season. 1951.

I asked him some specifics, and he had very few at his disposal. He recalled that the head coach, Jess Hill, was really a track man, and that the helmets were pretty flimsy. But there was this really extraordinary linebacker who started, and if only Jim could remember his name … if only …

I pulled out my phone and did a quick search. “Pat Cannamela?” I said.

His expression changed. Like, in a snap. From rainy January to Fourth of July.

I did an image search, and showed him this …

Jim didn’t speak. I actually think he was, literally, speechless. It was probably the first time he saw an image of Pat Cannamela in, oh, 40, 50 years. “He was just a fantastic player,” he said. “My, oh, my, he was something special.”

I began running off the names of the 1951 Trojans. A couple, Jim remembered. Many, he did not. But there were images from the era—Frank Gifford running through the UCLA defense, Cannamela reclining with a football. I swear, it was akin to smelling your mother’s fresh-baked lasagna 30 years after it was made a final time. “This would make a great commercial for the iPhone,” my son noted—and he was correct.

I rip technology as much as the next guy. It’s intrusive, it’s irksome, it’s impersonal.

But, on occasion, it can bring lost eras back to life.

It can do magic.

PS: The Wikipedia page for Cannamela said he died in 1973. I did some digging, found this … 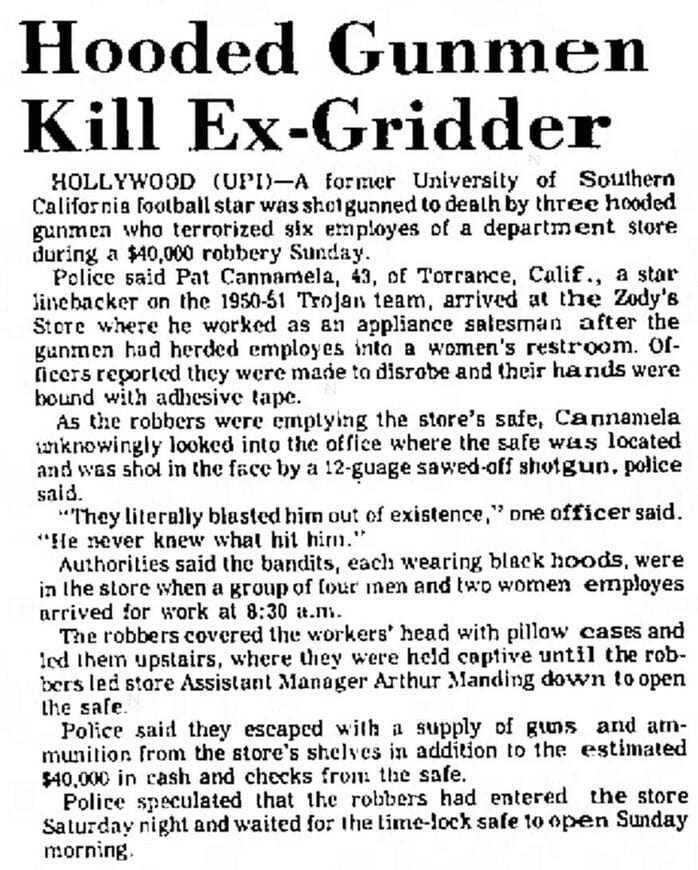