The Shame and Awfulness of 5-Hour ENERGY’s Pink Play

Not the color, per se, but the bullshit movement it’s come to symbolize.

Or, put differently, watch the above commercial.

Then watch it again.

Once, I thought KFC selling pink buckets to support breast cancer was the worst thing ever (eat a chicken breast, save a human breast?). Now, however, I’m not so sure. Just to get this straight: In order to help in the fight against breast cancer, I’m supposed to buy a pink bottle of 5-Hour ENERGY Drink? In other words, by giving my hard-earned money to 5-Hour ENERGY Drink, 5-Hour ENERGY Drink will surrender a tiny percentage of it to charity? And that counts as a good deed? As joining the fight?

To be blunt: What the fuckity fuck fuck is going the fuck on here?

Here’s an idea: Fuck your shit energy drink. How about I just give me money directly to the Mayo Clinic? In fact, 5-Hour ENERGY Drink asswipes, if you’re so incredibly charitable, how about you give ALL the profits to charity? And, since we’re on a roll, how about you do so without telling any of us? How about doing it purely out of decency? Out of compassion? To hell with the pink bottle, the raspberry flavor, the Grade-C celebrity-stuffed commercials?

Oh, wait. I forgot. That would take a moral compass that is, sadly, incompatible with corporate America.

One more thing. I just watched the commercial again, then froze it when the teeny-teeny-teeny-tiny wording appeared at the bottom of the screen. Wanna know what it says? Here you go …

Yes, a donation of five cents per bottle will be given by 5-Hour ENERGY. Five cents. From a drink that costs, on average, more than $2 a pop. The stinkin’ company even admits that, at a minimum, $75,000 will be given—which just might pay for a couple of mammograms and three hospital apple sauces.

This is the worst of the worst of corporate greed and callousness. Has anyone at 5-Hour ENERGY ever seen what breast cancer looks like? It’s not a jolly little subject that calls for pink jerseys and peppy music and Jim Furyk’s freaky haired wife. No, it’s foreign growths in your body. It’s chemo and radiation and fear and awfulness isolation and loneliness and dread and, oftentimes, death.

It has nothing—absolutely nothing—to do with this bullshit, and watching the commercial sickens me to my very core. 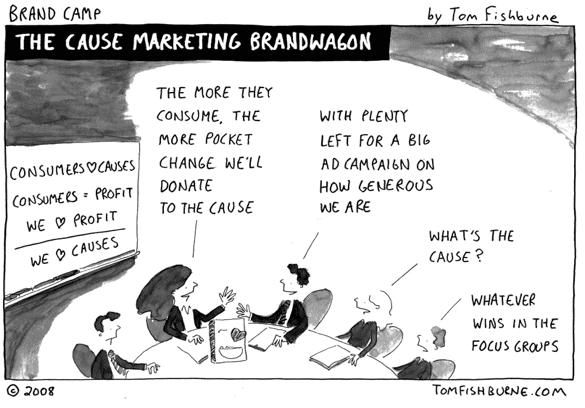