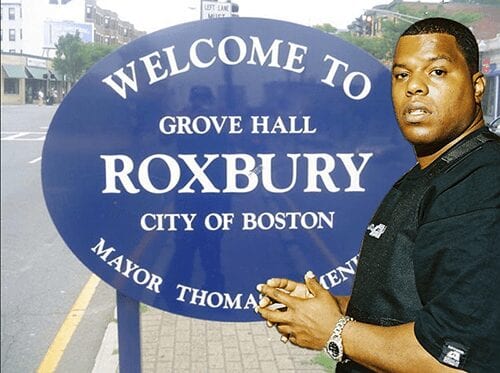 So a couple of weeks ago I was darting around Facebook, jumping from discussion to discussion, when I found myself in the midst of a hip-hop debate over the credibility of PM Dawn—who, back in the 1990s, I loved.

People were largely polite and mellow, save for some crank named Quadeer Shakur. Though there are no literal verbal voices on Facebook, Quadeer’s was loud and powerful. I disagreed with his takes, his thoughts, his perceptions—and told him so. He immediately dismissed me. I dismissed him back. He dismissed me harder.

I liked him immediately.

Little did I know, Quadeer (M.C. Spice) Shakur ain’t just some blabberer on a Facebook page. No, he’s the minister of information for the Zulu Nation, as well as the writer of Marky Mark’s two most famous hip-hop songs—Good Vibrations and Wildside. He’s a walking encyclopedia of hip-hop, and a genuinely fascinating man. Here, he talks hip-hop vs. rap, the joy of using a Lou Reed classic and why he prefers Debra Winger over 3rd Bass. One can follow Quadeer on Twitter here, and on Facebook here.

JEFF PEARLMAN: Quadeer, I’m gonna start with something we discussed in a heated-turned-fascinating Facebook exchange. Namely, what is the difference, to you, between rap and hip-hop? I ask because it seems that you hold hip-hop, as an entity, up to a very high standard. There’s a saying, “Anyone can be a father, but it takes someone special to be a dad.” I’m thinking you probably have a mindset along the lines of, “Anyone can rap, but it takes someone special to be hip-hop.” No? Yes? Explain, please …

QUADEER (M.C. SPICE) SHAKUR: Great analogy. And hip-hop is held to a higher standard, in that, we are about advancing the four spiritual principles of the culture: peace, unity, love and having fun—whereas most rappers are only tying to advance record sales. We represent the voice of the youth. Bottom line, Rap is something you do. Hip-hop is how you live. Everything rap ain’t hip-hop and everything hip-hop ain’t rap. That’s foolishness. Hip-hop is 39 years old, and it’s a very real culture that is an all-inclusive culture.

J.P.: You’re from Boston. I recently wrapped up a book on the Showtime-era Lakers, and many of those guys (and, in general, African-American athletes) hated going to/playing in your hometown, because of its racist reputation and racist reality. How would you explain the racial climate of Boston? And do you feel as if it’s at all improved through the years?

Q.S.: This is a blank stare answer. Boston’s racial climate is just as alive as it’s always been. The scary part is, racism doesn’t just mean white or black Americans, but the Haitian immigrants who come to Boston frown upon people of their own race (black), and the Polish hate the Irish (white). Boston is just screwed up —period. The only thing that diversifies Bostonians is hip-hop culture. Gay, straight, black, white … doesn’t matter when you share the same culture. American culture ain’t cuttin’ it alone.

J.P.: You wrote and produced the two most famous singles from Mark Wahlberg’s hip-hop career—“Good Vibrations” and “Wildside.” Before we get into the songs, I’d love for you to break down Marky Mark’s skills as a rapper. Because, just being honest, I think he’s a 100,000-times better actor.

Q.S.: Brother, I think Mark even knows he’s a 100,000 times better as an actor. Hell, he acted like a rapper. LOL. Got him a platinum and gold record respectively. As far as skills, I think if Donnie (Wahlberg—Mark’s brother) and I had developed him a little longer, taught some cadence, flow, breath control, the first album would have been even better. But Mark was heavy into rock when I met him. He wasn’t interested in rap or hip-hop until I met him and was commissioned to teach him the art of rap. However, in his defense, Mark is definitely hip-hop culture. He grew to love and respect the culture.

J.P.: With Wildside, you took a really, really, really famous, indelible song from Lou Reed’s collection and turned it into something different. Looking back, why? What made you think, “This is an ideal song to transform?” How difficult is that sort of thing? And did you ever hear from Reed later on?

Q.S.: When it comes to music, rap is shunned. But ironically, we study everyone’s style and we listen to everything. I have listened to Lou Reed and a lot of lyricists over the years. I’ve always thought of re-making his song, but with a ghetto twist on some of the stories. All of our stories are actually true. Only two people’s names were changed in my version. Annie represents someone we knew personally, and Ron represented my deejay, who was killed over drugs. Where Lou Reed celebrated, I denounced. But I understood him from his poetic stance.

J.P.: What’s your journey from there to here? I mean, I know you’re from Boston, I know you’re a writer/rapper/philosopher. But how did this all happen? What was your childhood path?

Q.S.: I’m from South Carolina. Beaufort. Home of the Great Santini. Moved to Boston at an early age and grew up in the Orchard Park housing projects with New Edition and Bobby Brown. Moved around and lived in Brooklyn for a few years, but came back to Boston where I hit the pavement rapping, graffitting, breakdancing and throwing parties all over the community. Snagged a major deal with Atlantic Records, and a few years later, started working with Mark. I was raised in the Nation of Islam, and born a Black Panther, so my love for my people runs deep. I’m now a Christian, but still deeply rooted in my community. I have a non-profit (ManUp Movement) where I help fathers with their visitation and custody matters, and help curb gang violence in the streets.

J.P.: This is a weird question, but I’ll throw it at you: What was your take of the Tupac hologram? Genius? Gimmick? Somewhere in between? And what’s Tupac’s overall legacy through your eyes?

Q.S.: Gimmick. Tupac wouldn’t have cosigned that. He died with a grudge against most of the guys who were on that stage. Plain and simple. That’s like Jesus having a hologram of the devil on stage with him. Or Kanye and a white man on stage trying to teach anybody about Jesus. Strictly gimmick. Tupac’s legacy is hip-hop history. As far as I’m concerned, he’s the John Lennon of our time.

J.P.: Quadeer, I spent many years as a baseball writer. I loved the game, loved writing about the game. Then, ultimately, it began to feel repetitive, and I got sort of bored. How do you not feel this way with music? Aren’t you ever like, “Yawn. I’m no longer especially interested? There’s nothing truly new under the sun …”

Q.S.: Actually, I am bored with music. At least the music radio stations like a Clear Channel would play. They ran out of ideas on how to merge the culture with radio. So they suck completely. But I’m never bored with culture. Learning the culture of others is fascinating and exhilarating. There are new things every day. And quite frankly, baseball is never boring when you’re a Red Sox fan. Sorry, but your team sucks, bro.

J.P.: Do you think race still matters in rap/hip-hop? Is it still a factor in, oh, sales or acceptance or quality or … anything? Or is it simply, “If you’re good, you’re good”?

Q.S.: Race never mattered in hip-hop. Love of the culture always matters. Race only matters in rap as it pertains to the radio stations. Clear Channel is one of the many radio station conglomerates that purposely got rid of the black deejays at their “Number One for Hip-Hop” radio stations, because their local businesses didn’t want black people at their stores making call-ins for the radio station. Do the math, bro. We can get on the stage, but we can’t work behind the stage.

J.P.: I’m fascinated by rap battles in that, well, they just strike me as high-energy, high-intensity, high-awesomeness moments in time. What’s it like, standing there, staring another performer down, spitting out words from the top of your head? Is it magical? Nerve-wracking? Emboldening? Frightening?

Q.S.: It’s like riding a bike. I love to battle. Hence, the name: M.C. Spice. Tell that to any emcee that wanna get slayed on stage. LOL

J.P.: You are the Zulu Nation Minister of Information. I, obviously, know Zulu from my days loving all things Tribe Called Quest. But what, exactly, is your gig? What do you do? And is it fulfilling?

Q.S.: Yes, it’s fulfilling. To know that millions of followers and members are serious about the promotion of our principles is heartwarming. My job is to promote the awareness of our culture through media, and to hold those accountable who try to misrepresent the culture. More important, to redefine the culture and continue the mission of promoting the culture through the five main elements/components: Deejaying. Emceeing. Graffiti. Break-dancing. And the most important element—Knowledge.

• This is my all-time favorite song. What do you think?: That shyt is HOT! Love the acoustics. I might sample it one day. LOL. His voice reminds me of Kim Carnes. He should remake Bette Davis Eyes. [Jeff’s note: He’s dead. Sadly.]

• What is the most important mental attribute for a rapper to have?: Confidence

• Best advice you ever received?: Don’t be rich. Be wealthy.

• Who wins a 10-round boxing match between you and Wahlberg? What’s the outcome?: I win. I’ll knock that motherfucker out in a minute

• Who was the best Batman?: I don’t know. All white men look the same with that damn mask on.

• Celine Dion calls. She wants you to move to Las Vegas and produce her new hip-hop album, “Yo! Celine.” She’ll pay $5 million, but you worked 360 days during the year and you need to change your name to Tuna John III. You in?: I’m in. I’ll cash the check and never call her back. She’ll have to sue me. After I spent it all. No dice, bro.

• All my students seem to think Kendrick Lamar is the greatest rapper ever. In 20 words or less, please tell me what to tell them about why they’re wrong: Because there will ALWAYS be somebody greater than the man who’s greater now. Nature of the game. But “ever”? Even Kendrick won’t agree to that.

• Ever thought you were about to die in a plane crash? If so, what do you recall?: Naw. I love the air pockets. Besides, you’ll be dead longer than you’ll be alive. Get used to it.

PrevPreviousThe Shame and Awfulness of 5-Hour ENERGY’s Pink Play
NextWhere are the questions?Next