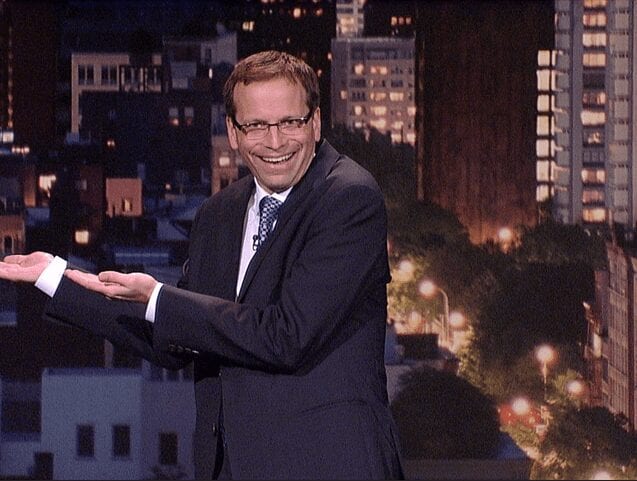 I’ve always been riveted by comedians.

It’s a weird sort of profession, in that you’re expected to be funny, and—if you’re not funny—something’s wrong. Yet you’re also expected to be hiding something. Sadness. Nervousness. Pain. There have been myriad explanations of the comic’s psyche, and they all (right or wrong) point to an inner something that makes one need the attention … the fame … the laughs.

Again, I’m by no means saying this is true. Just saying the perception exists.

That’s why I’m thrilled to have Lenny Marcus as today’s Quaz Q&A. A veteran of the stage, Marcus has appeared on (among others) The Late Show With David Letterman, Live at Gotham and Friday Night. He’s roamed the nation, standing before audiences in, literally, hundreds upon hundreds of cities.

Lenny Marcus, welcome to The Quaz …

JEFF PEARLMAN: Lenny, every so often a reader e-mails me a Quaz candidate, and that’s how you came to my attention. Specifically, a reader wrote: “My wife and I first saw Lenny perform on a Carnival Cruise ship comedy club two years ago and enjoyed him greatly. A few months ago, I stumbled upon him on Letterman and last month, we went to go see him headline the Foxwoods comedy club, a place were many of the heavy-hitters in the industry are featured. The stand-up comedy field is a brutal one to break into and it was pretty cool to see someone you saw on a boat make the jump to Letterman.”

Lenny, how true is the guy’s take on the high-low-high-low career of a comedian? Because it really does seem like a unique field, in that one can be on Letterman one night, standing before 23 people inside an Ada, Oklahoma club the next.

LENNY MARCUS: Well, yes, that’s the job. Letterman is kind of the reward for working on your act in Ada, Oklahoma, so to the outside world it’s weird maybe seeing someone on TV in their town or ship but it’s not weird not to comedians. Plus, I’m assuming that they are paying me decently for coming to /performing in Ada, so I don’t look at it as high-low. Then again, what does my hotel room look like …

J.P.: Of comedians, I’ve been told that—more often than not—behind the jokes there’s a sadness; a pain; an … emptiness; that those experiences and emotions serve as a sort of fuel. Would you say that’s, generally, true? Bullshit? And does it hold true to you?

L.M.: Personally, I think everyone has pain and sadness at some point. It’s not like comedians have cornered the market on it. We just have outlet to deal with it. And a fun one!

For example, pretty much everyone has gone through a breakup at some point. Everyone knows that pain. It’s not just the comedian. So if over time you turned the breakup pain into jokes about aspects of that relationship, this could a) Be very cathartic, b) help your act.

I often wonder how people who don’t have an outlet to make light of a difficult situation or some tragedy or a topic that bugs them deals with it. Therapy? Drinking? Drugs? If I don’t like something I try and joke about it. I’ve known people who can’t joke about stuff that troubles them and they have ulcers, shrinks, and cry a lot.

J.P.: I’ve heard this question asked before, but I’ve never heard a great answer—would love one here: What’s it like to always have people expecting you to be funny? That seems like a pretty pressure-packed existence, no?

L.M.: I really do believe this, the “expectations” are off. I tell people who expect me to be funny that I’m actually serious. I complain about stuff and then people think the way I complain is funny. Pressure-packed, nope. Anyone who walks up to you and says “Do something funny”, is kind of a nut. (But when in doubt dropping your pants in a crowd straight faced seems to work in that scenario).

J.P.: Here’s what I know of your background: You’re from Oceanside, N.Y. and, uh, well, that’s about it. So, Lenny, how did you become a comedian? Like, what inspired you? When did you first realize it was something you could do? When did you know you were truly funny?

L.M.: My acting teacher once said to me that I thought everyone is an idiot. Pretty much. I’ve just never taken the world or people very seriously. I would always make my classmates/friends laugh. I loved making my parents laugh. They loved when I came home and told them things that I thought were funny at school. We used to go up to the Catskills and I’d sneak in and watch the comedians. It was always a singer and a comedian or vise versa. I was miserable when the singer went first because I sometimes fell asleep. But I always was fascinated by comedy. As a family we always watched comedies on TV. Carol Burnett. Bob Newhart. Then when they had Evening at the Improv, comedy looked so cool. When I went to college my roommate also was a big comedy fan. He had all comedy albums! We decided that when we graduated we had to try it at least once. But we knew it was going to be hard. So of course we both went to work in Corporate America. Let’s just say Corporate America was not for me. People in suits can very verrry serious. Can you believe that your boss from the backwoods of West Virgina doesn’t appreciate sarcasm related to other office workers, the company policies or his toupee? Sheesh.  I decided to try an open mic. It took a couple of years of hard work but I got a different career going. You know you’re funny when they start paying you to do your act—lol.

J.P.: I’ve asked singers and athletes and writers about “The Process,” but never a comedian. Lenny, how do you develop your material? Where does it come from? How do you know if a joke works or not?

L.M.: My material comes from a passionate like/dislike of something/someone/some situation. Something I deem stupid or annoying. Something I deem unjust. Someone’s behavior I don’t like. Then I twist it into what I think is a funny way of making my case and see if a random group of people agrees. The audience will tell you if the joke is funny. For example, today’s topic I realized I’d like to write about is recycling. There’s nothing really funny about the act of recycling bottles. Until I actually started thinking about how friggin’ long I’ve been doing it, why am I doing, and how it annoys me. Seriously, what’s in it for me?

L.M.: Well, easily the greatest was Letterman. My best friends were there but more importantly, my father was there—the last show before Father’s Day. Too cool. The lowest? I think when I started somebody yelled, “Jew, get off”. That wasn’t a good day.

J.P.: Do you feel, at this point in your career, you understand the heckler? I’m being serious—there are people out there (as you’ve surely seen) who take delight in heckling people performing on a stage—be they ballplayers, singers, politicians, comedians. I’ve never understood it. Why do these people behave in such a manner?

L.M.: Well there are many types of hecklers. If someone really wants to ruin a show, they will unless someone removes them. Most of them want to be heard. They want to be the center of attention. They want to be the comedian but don’t have the guts to get up on stage themselves. Cowardice, alcohol, bad upbringing, social ineptitude, general clueless-ness are all heckler backstories. Basically, for whatever reason, they’re dickheads and don’t even know it.

J.P.: I can think of few things more terrifying than walking onto the stage to perform Letterman before millions of viewers. What was it like for you, the first time? How do you not just throw up and hide?

L.M.: I loved it! I worked my whole career to get that show and it was my top goal. Believe it or not I was waaay more excited than nervous. I couldn’t wait to get out there. If you’re really that ready, you won’t be nervous. The audience is 100 percent warmed up and on your side, in a perfectly laid out venue for comedy. I would do it once a week if they let me!

J.P.: You’ve probably never been asked this, but while watching your routine I started thinking about transitional moments in comedy—like, that three-second pause when you shift from one topic to another. Is there an important way to transition? Is there thought put into it? A way to do it well or do it poorly?

L.M.: I love segues. When it’s done well, it’s seamless. I work on it a lot.  Some guys don’t have that style, and just pause. When I headline, I try and stay as seamless as possible. Plus, if one thing leads right to the next thing, I remember my act better!

J.P.: I recently heard an interview where Jay-Z talked about the difficulty of a rapper maintaining his A-material with success. It’s easy to rap about slinging drugs, fighting gangs, etc. But what can you say when you’re living in a mansion, making millions. Do you think, as comedians age and attain success, it becomes harder to stay funny?

L.M.: It’s probably true but there are other factors involved. I think people mellow with age and things annoy you less so that could affect your act. You could have a family pulling your writing time away from you. Plus if you have money or success, things bother you way less, or you perform less, or you care a little less. Sometimes after 20 years, a lot of guys are sick of struggling through new material and would rather stick to what works and then their act gets dated. If I had $10 million and someone said lets go play golf, I think it would be hard to say, “Can’t golf on this beautiful day, I need to do a spot at the Comic Strip.” Then again, Seinfeld and Chris Rock still show up at the Comedy Cellar and work on stuff. It’s inspiring.

• Have you ever thought you were about to die in a plane crash? If so, what do you recall of the experience?: Yep. Aspen Comedy Festival. Ten-seat plane in a blizzard. I called my sister on my cell phone to tell her I love her (My parents didn’t answer the phone). I remember gripping the seat like a vice until we landed. And then I wrote a whole bit about it.

• In 2013, are gay jokes (by a straight comedian) off the table?: Nothing is off the table if you do it right.

• In 30 words or less, your thoughts on the movie Punchline?: Well, Hanks was great (I like Sally Field, too). Some of the things were accurate and then some, well … as a kid, I thought I guess that’s how it is.

• The one question you’d ask Dan Zanes were he here right now?: Um … I guess I would sort of ask him or the guy next to him, “Who is Dan Zanes?”

• Why do so many Jews become comedians? (I’m Jewish—so I can ask): Jews like funny and have laughed through tragedy throughout time. It’s their way of dealing. Laughter really is the best medicine.

• What’s the worst movie you’ve ever seen?: Tim Burton’s version of Willy Wonka. The original is one of my favorite movies and this remake was the worst idea ever.

• Do you think Albert Pujols can bounce back in 2014?: I had plantar fasciitis. Very painful. He’ll be back and be pretty solid in 2014.