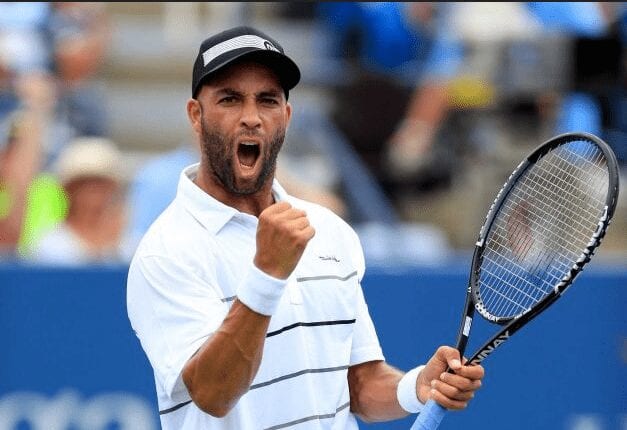 I’m not much of a tennis guy. Oh, I’ll watch from time to time, but only out of the corner of an eye while reading a book or eating Honey Nut Cheerios. The sport just isn’t my thing.

James Blake, however, was my thing. Or, to be more precise, I found myself rooting for him beginning in 2001, when at the U.S. Open an Australian named Lleyton Hewitt asked for a linesman to be removed during a match against Blake—noting both were black and, therefore, bias might exist.

Blake handled the incident with dignity and class, earning a legion of fans who would stick with him throughout his impressive pro career, which ended three months ago after 24 finals appearances and a peak No. 4 world ranking. Blake experienced some remarkable highs (two U.S. Open quarterfinals, the finals of the 2006 Tennis Masters Cup, the 2006 Beijing Olympic semifinals) and some awful lows (in 2004 he broke his neck and contracted shingles, temporarily paralyzing half his face), but retired as one of the sport’s most respected figures.

One can follow James Blake’s foundation on Twitter here, and visit his site here. His autobiography, Breaking Back: How I Lost Everything and Won Back My Life, was a New York Times best seller.

James Blake, serve up the Quaz …

JEFF PEARLMAN: So, James, my last book was a biography of Walter Payton, the legendary Bears running back. I opened the book with a poem, “The Athlete.” It reads:

Most of life is a falling away/A gradual surrender of the dream/The reason sports provide such/Dramatic material is that the climax/Comes so early in a man’s life/The decline so swiftly.

I thought of this earlier today, while coming up with questions to ask. Last August 30, you wrapped up your professional tennis career. You’re only 34-years old, though, young in all other realms of life. How hard was this to accept? How difficult has the adjustment been thus far? And how will you ever match the high of, say, standing center court at the U.S. Open, or reaching the semifinals of the Olympics, or being ranked No. 4 in the world? Does the retired athlete sort of have to accept he’ll never experience the same highs he had in youth? And isn’t that sorta depressing?

JAMES BLAKE: I decided to retire this summer. I felt like I couldn’t train and improve the way I wanted to. When that happened, I knew I wouldn’t enjoy it as much and my body would only continue to get worse. It was a little bittersweet. I am truly excited for the next chapter of my life and to be home a lot more. I think every athlete will miss certain parts of that life. I know I will never receive another standing ovation, but I’m OK with that. I’ve had more fans and more unforgettable moments than I ever thought I could have.

J.P.: Along those lines, how did you decide to retire? What factors contributed, and when did you ultimate make the decision? Was it a relief? Or heartbreak?

J.B.: I think tennis is a sport that has younger retirees because of the demanding schedule. Our time off is basically nonexistent. We are on tour from January through November. Then we cram in a few charity events and exhibitions during December while still training for Australia. Our injuries never really have time to heal and we don’t have as much time to truly build up our bodies the way they should be.

J.P.: James, I covered baseball for Sports Illustrated, and a good number of ballplayers thrived well into their late 30s. The same goes for the NHL and, to a lesser extent, the NFL. So why is tennis such a young pro’s game? It seems like tennis players peak at, oh, 22, and often fade off into oblivion by 27. No?

J.B.: I have no idea how my body lasted as long as it did to be a pro athlete. I really didn’t know if it was going to be possible at all. The only thing I felt like I could control was to work as hard as I could and not have expectations. I had no idea where it would lead me, but it ended up taking me to heights I wasn’t sure were possible. That is part of the reason I feel so lucky that I got 14 years on tour.

J.P.: I’m gonna say something quite weird, and I hope it doesn’t freak you out. I’m a white Jewish guy—and the fact that you’re African-American made you one of my favorite pro athletes. Why? Because I knew how unaccepting tennis had often been for so many, and I loved how you rose through the ranks. Does this make me sorta weird, or have others told you about embracing you for your ethnicity? And are you OK with that?

J.B.: I appreciate the way you relate to me as a white, Jewish man to me as an African-American tennis player. I like any way of getting fans into tennis. I think minorities often feel like sticking together. So I can understand it and the feeling that we both overcame the odds and may have gone against the grain to achieve what we set out to achieve.

J.P.: As you surely saw, earlier this year a Philadelphia Eagles receiver, Riley Cooper, was caught on tape using the n-word at a concert. He quickly became persona non grata in Eagle camp. James, at the 2001 U.S. Open, Lleyton Hewitt asked for a black linesman to be removed during a match against you—noting that you both had the same skin color and, therefore, there could be bias. It was ugly and offensive and awful … and I wonder, looking back, whether you think tennis didn’t do enough to punish. Also, did you ever foster any sort of relationship with him? Did you hate him? Hold a grudge forever? Move on?

J.B.: Lleyton and I had that unfortunate incident back in 2001. It was eye-opening for me to see how big of a story it became when I was so focused on winning the match. But afterward, I spoke with Lleyton the next day to straighten it out. I gave him the benefit of the doubt then, but it strained our relationship for a little while. Eventually we completely moved on and have been totally fine in the last few years. I think we both saw the bigger picture in life as we had families.

J.B.: The greatest moment of my career was winning the Davis Cup for the United States in Portland. Doing that with my friends Andy and the Bryans was something I will never forget. The lowest moment of my career was trying to play when I was sick with Zoster. I tried so hard to play, but my body wouldn’t allow it and I felt like I was letting the fans down by even trying.

J.P.: Strange, blunt-ish question: Your career paralleled the career of Roger Federer. You go down as one of the better players of your era, Federer goes down as, perhaps, the greatest of all time. I mean this with all respect—but, tennis-wise, what did he have that you didn’t? Like, in your sport what’s the divide between all-time elite and really, really good?

J.B.: Roger clearly showed me the difference since it seemed like my prime coincided with his prime. I felt like when I played my best, I could beat anyone in the world. He showed me that he had an extra gear that I didn’t have. I felt like he did everything I did, but just better. He controlled the court better, served better and played defense better.

J.B.: Tennis wasn’t boring to me. I actually feel like it has more variety than most jobs.  Different cities, different surfaces, different opponents. I loved it and still love the game. I could see training getting a little bit boring at times, but I couldn’t imagine competition ever being boring.

J.P.: You appeared on Bravo’s second season of Celebrity Poker Showdown, but lost to Maura Tierney in the finals. What is it about poker that does it for you? And call it fill the void of no tennis?

J.B.: Poker appeals to me for the thought process involved. There are a few parallels with tennis and I actually think it helped me to control my emotions a little bit on the court. In poker, you have to deal with a lot of highs and lows that can sometimes be out of your control. I enjoy learning the game and the ability to always learn and improve. That’s the way I felt about tennis, too.

• Three interesting things you can tell us about your childhood pal, Jonathan Mayer: He studied Japanese in high school, he has two brothers that are the same age as my brother and me, and he has a great heart.

• One question you would ask Dennis DeYoung were he here right now?: What were the 80s like as a rock star?

• Best joke you know?: My favorite joke is probably not to be published.

• Why in the world would anyone write a book?: I don’t know why other people write books, but for me it was to relate my human story to those who might not know me.