Over the past couple of days Duck Dynasty has ruled the chatter nonsense world of chatter nonsense. It’s all anyone can talk about, which led CNN.com—a website I sometimes contribute to—to lead with this last night … 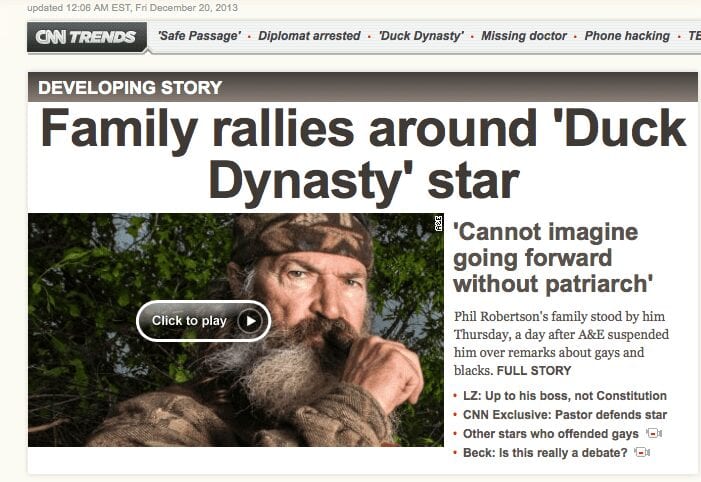 To put the whole thing in perspective: North and South Korea are going through crazy times. The U.S. economy hit some major recovery landmarks. The Obama Administration announced some last-second health care extensions. On and on and on. Birth. Death. Famine. Negotiations. The world being the world being the world.

CNN.com led with Duck Dynasty. And why? Because. All. The. Damn. Site. Cares. About. Is. You. Clicking. On. It. That’s the name of the game in 2013 “news” media. Clicks, which equal ad sales, which equals money. It’s not about getting this thing right, or reporting on what most impacts you, the American citizen. It’s 100-percent about click, click, click, click.

The reason I pick on CNN is simple: I used to love CNN. I grew up watching CNN. I know people at CNN. It was THE cable news network throughout my youth and teen years, and I remember tons of my fellow students at the University of Delaware gathered around their televisions, watching CNN’s remarkable coverage of Operation Desert Storm back in the early 1990s. THAT was news coverage. THAT was going after the story, and taking ownership of it.

Somewhere along the line, however, CNN cried uncle. The big guns saw what sales—stupid bullshit nonsense pieces of reality TV stars and dead celebrities driving too fast. CNN is now the network/home of 24/7 Paul Walker coverage (an actor most Americans had never heard of) and 24/7 Duck Dynasty crapola. It’s the place where Piers Morgan calls home. And Piers Morgan is, unambiguously, one of the worst “journalists” in America; an awful interviewer, a dreadful deliverer of information; a guy who makes me long for (I can’t believe I’m writing this) Sean Hannity. Really.

I want CNN to be great again, because I want an unbiased American news agency to step up and deliver real, legitimate news—clicks be damned. I can’t watch MSNBC—too liberal. I can’t watch Fox News—too awful.

And yet! At the same time CNN posted Duck Dynasty as its lead, here’s what ran atop Fox News’ website …

I’m sure the stories were biased and slanted. I’m sure Hannity teed off on the president for 99 percent of his allotted air time. I’m sure the coverage would have made me miserable.

But at least Fox News knew where the (ahem) news was.

Oh, this is a tangent—but one more thought. The whole Duck Dynasty thing is not news. It’s just not. A guy from the Bayou who has a reality TV show says bad things about gays and blacks. Um, how does this impact me—or anyone? I know tons of people (from my boyhood) who disliked gays and blacks. They weren’t newsworthy. Hell, I ignored them completely. This is pure sensationalism. A bright-light, look-at-that! story to generate numbers.

And we all play the fool.

PrevPreviousThe greatest holiday ritual of all time
NextRubber bands …Next