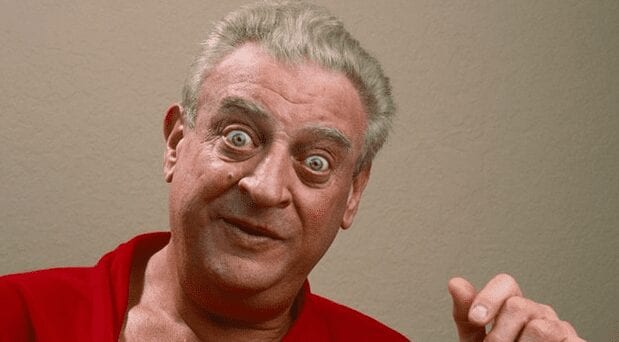 Today, while driving with the wife, I got to thinking about old stories I’d never told her about. One that crossed my mind: Naked Rodney Dangerfield.

Yes, naked Rodney Dangerfield. In 2004, toward the end of my brief career at Newsday, my editor asked whether I’d like to interview Dangerfield, the then-82-year-old comedian who was promoting his new autobiography. “Sure,” I said. Hell, who turns down that sort of opportunity.

I was told to meet Dangerfield inside a penthouse in Manhattan’s Omni Berkshire Place. I knocked on the door which—I believe—was slightly ajar. I heard, “Come on in.” I entered. There stood Rodney Dangerfield. Naked.

Well, not entirely naked. He was wearing a robe that was wide open, his, eh, junk hanging out with the casualness of a plastic bag. I, of course, asked Dangerfield about this and he shrugged. “When you reach a certain age,” Dangerfield said, “you throw a lot of things out the window. What do I care what people think? I’m just trying to be me. To be myself.”

Seeing Dangerfield nude wasn’t pleasant. It actually reminded me of an incident from about a decade earlier, when I was a writer for The Tennessean. One of my colleagues was a wackado woman who, to be protective, I’ll call “Sally.” Sally was probably 60, with leathery skin and a love of cigarettes. I lived in an apartment along the Cumberland River, and Sally’s pad was about five units away. One afternoon the phone rang.

“Jeff, I’ve fallen in the bathtub and I can’t get up. Can you help me?”

I ran over to Sally’s, entered the front door, rushed into the bathroom and—noooo. Sally was completely naked, gripping onto her phone (no idea how it got there), flailing like an overturned beetle. This was, for 22-year-old Jeff Pearlman, too much to see. I grabbed a towel, wrapped it around her, lifted her out. I’ve been scarred ever since.

Dangerfield’s nudity wasn’t scarring. Just weird and off-putting. During our time together he also smoked a joint—an interview first for me.

He died two months later. I can’t help but wonder whether he was buried in the nude.

Would have been appropriate.