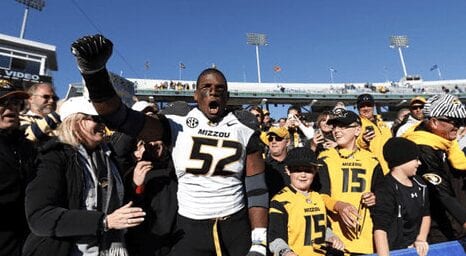 I don’t have a close second.

In case you missed the news, earlier today Sam—a graduating senior at the University of Missouri and an All-American defensive lineman—told the New York Times and ESPN that he is gay. In and of itself, in 2014 that sort of thing isn’t such a huge deal. I have gay friends, you probably have gay friends. Blah, blah, blah. Yawn, yawn, yawn. Yet this isn’t about me, and this isn’t about you. It’s a young man—just 24—preparing to become the first openly gay player in the history of professional football.

That ain’t no joke.

Sam isn’t Jason Collins—at the end of his career, ties already established. He isn’t Greg Louganis or Martina Navratilova—stars in individual sports. No, he’s a kid who’s about to be drafted into the NFL; a kid who said, “To hell with it—I’m done hiding  …” whether his stock crashes or not. Much like Major League Baseball and the National Basketball Association, the NFL isn’t exactly the land of openmindedness and inclusiveness. Yes, it’s diverse, as far as black-white and Southern-Northern goes. Yes, many of the players reacted to Sam’s announcement by Tweeting positive wishes. Yet, beneath it all, Michael Sam will not have it easy. “Faggot” and “Queer” are common putdowns for those perceived to be weak. Beneath piles—where shadows overtake light and spectators can’t see clearly—knees are hit, ankles and turned, elbows are thrown. Sam will, without question, takes shots others won’t.

He’ll also be the uncomfortable non-secret in locker rooms. Some teammates will avoid him in the showers. There’ll be whispers and chuckles. Religious teammates will damn him a sinner. Maybe to his face, maybe not. But the words, they will speak.

And yet … I get the feeling this man can take it. He’s clearly intelligent and insightful. He braved coming out to his college teammates, and was encouraged by the aftermath. He seems to know he’s a trailblazer; seems comfortable carrying that torch.

I’ve never seen him play, but I expect my son to be wearing his jersey next season.