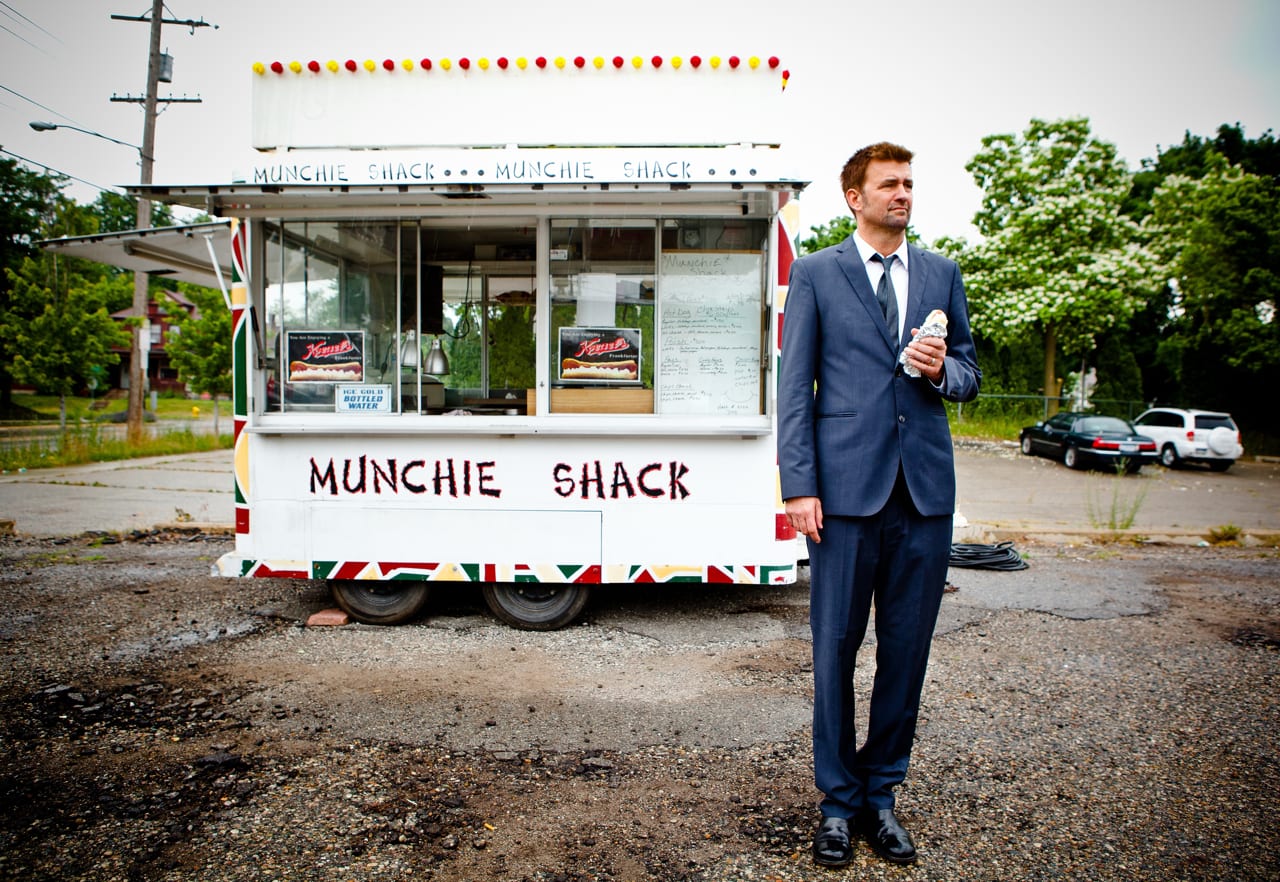 There is a good chance you know Brian Vander Ark.

As the lead singer of the Verve Pipe, he helped sell more than 3 million albums, and the band’s hit single—The Freshman—landed atop the Billboard Top 40 chart in 1997. Four years later, he appeared in the Mark Wahlberg-Jennifer Anniston film, Rockstar—a movie that closed with Wahlberg lip-synching Vander Ark’s single, Colorful.

There is a good chance you don’t know Brian Vander Ark.

Despite his accomplishments, he’s remained relatively quiet and below the radar. There’s no arrest record or TMZ file; no wild antics featuring Verve Pipe members throwing crack vials out of a London skyscraper window. You won’t see him on some faded-celebrity cooking show alongside Tiffany and Vanilla Ice.

No, Vander Ark just sings, records and tours. He plays theatres—and also plays your yard. He’ll teach your kid a few tricks on the guitar, play video games, cover any Hall & Oates song he knows. Put differently, in a musical landscape often poisoned by egomaniacs and dickheads, he’s a cool dude. He’s one of us.

Here, Brian talks about commercial highs and touring lows; opening for KISS and being confused with the guy who sings Bittersweet Symphony. One can visit Brian’s nifty website here, and follow him on Twitter here.

JEFF PEARLMAN: Brian, I’m gonna start with a weird question. I love The Freshman. I mean, I absolutely love it, and think it’s an all-time great song that gets woefully overlooked in the category of all-time great songs. But I wonder: Do you feel this way? Are you more, “That’s my best song, and it’s amazing and tremendous …” or are you sorta like, “I wrote it when I was young, it’s OK, but I’ve done better?” When you hear someone rave about it do you think, “You have a golden ear” or “You’re overrating me a bit”?

Brian Vander Ark: I don’t really feel the song is overlooked in the all-time great song listings. I’ve never felt like it’s in the same category as far as songwriting goes—it’s a bit too clumsy here and there, and if I could go back and change some of the lyrics I would. If we are talking about how people respond to it and if that comes in to play when deciding great songs, then yes, it’s overlooked.

B.V.A.: Funny, I really enjoyed my time on the set—who wouldn’t? Two of the top starts in the world, then throw in a bunch of rockers?  Awesome.  As far as the character goes, I didn’t feel like it was a big enough part to have to really flush anything out. That could have been me in the 80’s, had I decided to go in the hair band direction. I didn’t think the ending worked at all with Mark lip-syncing, but I was told that people wouldn’t really care who sang the song, and it’s true—it’s believable enough to fool the masses. RCA missed a great opportunity to make something out of Colorful, but they had their sites on other things (a little show called American Idol).

J.P.: You have one of the coolest openings to a bio that I’ve ever seen, including the sentence, “Rather than blindly attempt to reclaim a throne that was ﬂeeting at best, the Michigan native struck out on his own, sold all his possessions, hit the road and released his acclaimed debut solo CD, Resurrection, in 2005.” I wonder, Brian, how hard it is/was to have massive success and not spend the next 15 … 20 years trying to commercially top it? Like, do you still have hunger pains for 3 million album sales? Do you still crave massive radio play? How have you been able to adjust, mentally, to being a fantastic singer who will never again reach those commercial heights?

B.V.A.: Well, thanks for the nice words. I pride myself in not being a bullshitter, and I can honestly say that I don’t crave those sales numbers any longer. My life is great now—that pressure of selling records is off.  I have no desire to leave my home and go out for a couple of years on tour again. I hated that part of it—all of the promoting, promoting, promoting … too much. I feel very little pressure now, and I can sit back and enjoy life.  As far as radio is concerned, I would have to pander heavily to them to get anything played … I wouldn’t want that. I hear the same chord changes in about every song on pop radio—no surprises.  I don’t want anything to do with it.

J.P.: During summers you do your “Lawn Chairs and Living Rooms Tour,” during which you play the homes and backyards of fans. That’s something I’ve never heard before. How did the idea come to fruition? How does it work? And how can I book you for Pearlman Jam ’14?

B.V.A.: It came out of having too many bills, and not being able to pay them on club gigs that don’t pay shit, and still don’t.  I played a private party, and milled around after and played cover tunes for people for fun. I thought, ‘Wow what if I did this for a living?  Just went to people’s homes and played for them casually?’ Eight years later, I’ve done more than 500 all told. House concerts are my life now. You get paid, people are quiet during your performance. They offer to feed you. Then they all buy merch. As far as booking, its done very grass roots. You send in an email to spoiledbratmanagement@hotmail.com and give some basic details of some possible dates, location of your party, etc. and someone gets back to you with options and cost. Shows outside of the Midwest are generally booked together to try and save costs for each of the hosts. You get a two-hour engagement with a split between music and social time which has been anything from just meeting all party guests to playing Guitar Hero or teaching a song on guitar to a host. Each one ends up a unique experience.

J.P.: Here’s what I know: You served in the U.S. Army. You’re a singer. But, Brian, where did the love of music come from? How did you develop from a kid who probably liked tunes to a guy who has made a career of it? In short—what’s your path?

B.V.A.: I was born in Holland, Michigan. I was in Germany in the Army. I always had a love for making up my own songs, and that guitar went with me everywhere—even got it taken away from me in my Army days, as punishment. The love of music is innate. We all have it. Those who want to perform have to have the courage to do so. And that courage comes with building confidence.

J.P.: What’s it like playing the same song 5,000 times? We can use The Freshman for example. I’m sure, early on, it held great zest and oomph to you. But how about after a year? Two years? Fifteen years? Is it agony to play it now? Can you still get a sweet feeling out of it? Is it just mechanical whatnot?

B.V.A.: I have never gotten sick of it, because for the crowd, it’s the highlight of the show. People sing along and relive their past. That will never change. And that’s a good feeling. It’s the go-to song when things on stage aren’t working. It always works, so it’s like a reset button on bad sets.

J.P.: You don’t blog very often, but when you do so it’s really interesting shit; mainly advice to other artists about travel, booking gigs, etc. What are the hardest lessons you’ve learned in the business? What are the biggest mistakes, as a musician, you’ve made?

B.V.A.: Listening to stylists was the biggest mistake. Have you seen that awful hair i had on Letterman? Seriously though—I have little regret. I’ve enjoyed the ride, and I have a catalog that I’m proud of. That’s all that matters.

J.P.: KISS was recently inducted into the Rock and Roll Hall of Fame. I have many people from my hometown who think KISS is the greatest thing to ever hit rock music; that the guitar work is amazing, that Paul’s voice is dazzling, that Gene is … blah, blah. I sorta think they’re entertaining, but not especially musically adept. Brian, you toured with KISS. What was that like? And what’s your take of the band?

B.V.A.: Touring with Kiss was good and bad. It was amazing for us because we had never had a tour bus, never had catering, never played in front of 20,000 people. But the bad outweighed the good—getting booed and spit on for 30 dates took its toll. Although I’ll never fear another crowd. Musically speaking? It is what it’s supposed to be—dumb rock and roll with lyrics with very little substance, but you can’t help but cranking up. I still enjoy Destroyer very much, along with Gene’s solo album.

B.V.A.: Greatest was knocking U2 off the number one spot. Lowest was the release of our followup ‘Frog’ album.

J.P.: Shit, September 11, 2001 was a weirdly awful day for you. Besides the obvious horrific tragedy (which, we both surely can admit, trumps any other things), it was the day The Verve Pipe’s album, Underneath, was released, and also the day Rockstar hit theatres. I’m wondering, professional, what that was like for you, and when you realized—as a musician—“Shit, this is awful”?

B.V.A.: It was awful for the fact that we really liked what we had done, and weren’t able to promote it. It was good, too—the fact that there was zero pressure. We could always blame the terrorists for our lack of sales. 😉

• Ever thought you were about to die in a plane crash? If so, what do you recall?: Never—that’s the one time I give up all control.

• Celine Dion calls. She offers you $1 million to record a duet, “The Sophomore,” but you have to also get a tattoo on your left butt cheek that reads, “My heart will go on.” You in?: That’s a lose/lose. Out.

• The next president will be …: Hillary.

• What is the most overrated attribute of a rock band?: Drugs.

• I’m gonna be honest—every so often I used to get The Verve and The Verve Pipe confused. A. Has anyone ever done that to you? B. What’s your take on Bittersweet Symphony.: Every day. I have no problem with it—it’s a great song. 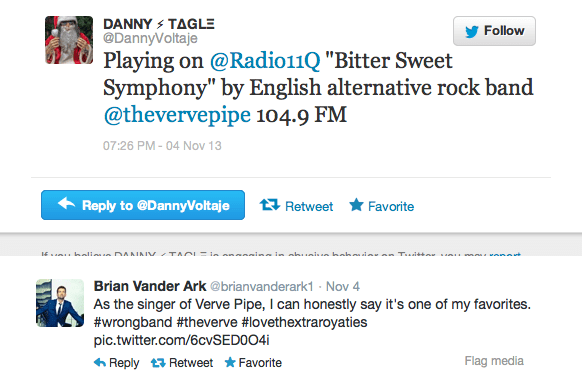 • Absolute best venue you’ve ever played? Absolute worst?: Kalamazoo State Theater in the 1990s. The Lobby, in Flint, Michigan was the worst. We had to put our own socks over the mics so that we didn’t get shocked.

• One question you would ask Larry Wilcox were he here right now?: Who are you?

• Why do so many singers smoke cigarettes when it’s so bad for the vocal chords?: Its really, really, really, really cool looking. It says fuck you—I know it’s bad for my voice, but I don’t give a shit ’cause i look cool.  Rock is 90 percent visual.