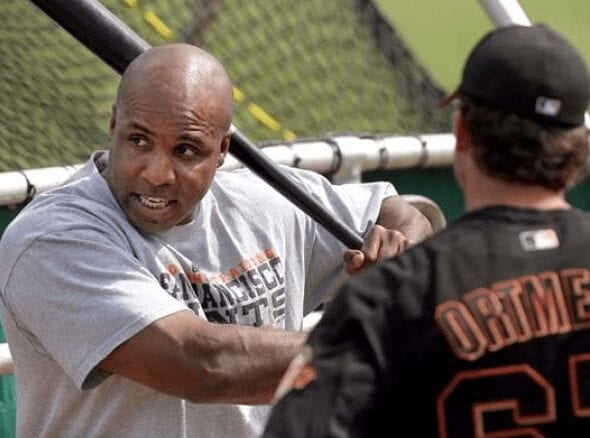 Every year around this time, Major League Baseball teams bring in a bunch of retired players to serve as “special instructors.” It’s a cool gig that I’ve always enjoyed observing from afar. You’ll be walking around a clubhouse, going about your business, when—whoosh!—Omar Moreno walks by. Or Steve Kemp. Or Danny Heep. Those are just three random names, but you get the idea. It’s sorta like old home month.

For the ex-players, it’s a beautiful thing. They get some spending dough in their pockets. They get to wear the ol’ uniform again. Fans call their names, bellowing for autographs. Oh, and best of all: They do almost no work, and have an all-access pass to the clubhouse buffet and Bazooka bucket.

A few days ago, I read that the San Francisco Giants have invited Barry Bonds to come as an instructor. When I initially Tweeted about this, the general reaction was, “Get over it.” After all, Bonds cheated many years ago, time has passed, blah, blah, blah.

I get it. Really, I do. So, in the name of peace and tranquility, let’s pretend the PED thing never happened. It was all a dream, and Bonds’ records are 100-percent legit.

I still would never, ever invite the man.

Why? Because Barry Bonds spent his entire time in a Giants uniform treating everyone as if they smelled of anal hole residue. He really did. He was a bully, a jerk, a genuinely mean and heartless man. I’ve never met a teammate who liked Bonds; never came across one who felt comfortable asking him for help. Yes, he treated the media like gnats, but the people he treated even worse were the Giant employees—clubhouse guys, staffers, front-office executives, even the owner and CEO. He ran over absolutely everybody, because, well, everybody allowed themselves to be run over. He was an uncooperative, unyielding steamroller. It was pathetic to watch.

But now, for some inexplicable reason, the bullied are allowing the bully back in. It’s inexplicable, and if you believe the ol’, “He has so much knowledge to share with our young players,” I’ll happily sell you my Ron Hassey Cleveland Indians rookie card for $100,000. Special spring instructors rarely do anything of substance. And, if they do do something of substance, it’s usually because they’re men who genuinely, genuinely, genuinely care about people, and have an unquenchable desire to help.

Barry Bonds will enjoy the spotlight once again. Enough time has faded, and San Francisco fans have long been suckers for ol’ No. 25.