Outside the Staples Center 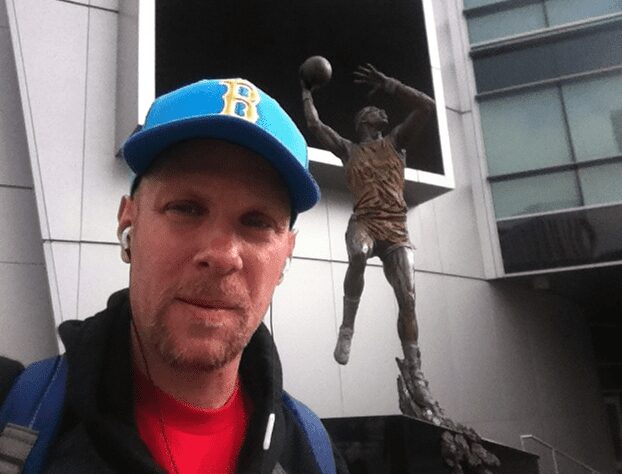 As I write this, I’m sitting at a table inside the Staples Center Starbucks. I’m wearing a UCLA baseball cap, a black sweatshirt, ugly brown shorts and flip-flops. In an hour or so, I’m about to eat my humble pie.

Writing books is great. Tremendous. Awesome. It’s two years of being left alone; of digging; of feeling out a subject and reading and traveling around. Really, it’s one of my true loves, and I’m insanely fortunate to be doing this for a living.

Promoting books, on the other hand, is eh, um, well, awkward. But necessary awkward.

You call in favors. You ask friends and colleagues to spend money on your product. You Tweet incessantly, usually about yourself and your work. I don’t think I’m a huge ego guy, but book pimpin’ requires ego to emerge toward the forefront.

I digress. Tonight, I’ll be standing in front of the Staples Center, handing out thousands of postcards for Showtime, my new 1980s Lakers biography. It’s weird, and uncommon. It’s also, I believe, smart. These are basketball fans. Los Angeles basketball fans. Even though tonight’s game features the Clippers, many of these people surely look back fondly upon the Magic-Kareem-Worthy-Riley Era of the city’s basketball tradition.

Hence, I’ll be out there. Handing. Out. Flyers. And, naturally, watching 80 percent of said flyers wind up in the nearest trashcan. Which is actually OK—because while it’d be nice for people to frame the cards and keep them forever, well, it’s not about that. This is about awareness; spreading the word that a new book is coming out.

I started doing this a decade ago, when The Bad Guys Won! came out. I tiptoed into the Shea Stadium parking lot, past the security guards, and walked row to row to row, handing out postcards. A couple of times someone would ask, “Are you the author?” To which I would say, “Um … no.” I was embarrassed. What sort of author hands out postcards in a parking lot?

That stance has changed. While it remains a tad awkward, I also stand proud. I believe in this book. I am happy with this book. I worked hard on this book. Why shouldn’t I be out there, spreading the word? Shouldn’t a person stand behind his product?

PS: When Sweetness came out, I planned on handing out flyers at Soldier Field. Then the backlash happened following the SI excerpt. Then the violent threats started. Then the book burning. And I thought, “Eh … maybe not.” 🙂