“Since you guys are so amazing, I am going to sing you a song from my new album.” 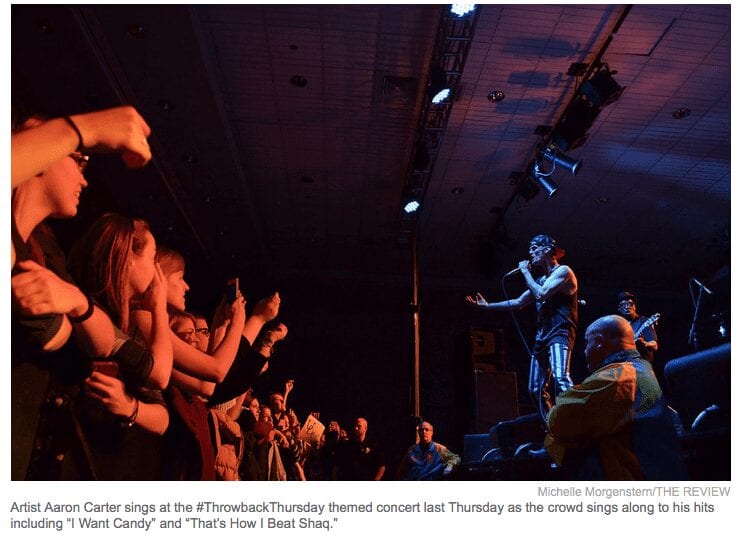 There are good lines in this world.

There are great lines in this world.

And then, best of all, there is THE line—from a wonderful article written by Nicole Rodriguez in the latest issue of The Review, the University of Delaware’s student newspaper. The piece, titled, “Aaron Carter Brings Back the Early 2000s with a Dash of Top 40,” chronicles the once-upon-a-time pop star’s concert inside (awesomely) something called the Trabant multipurpose room. It sounded like a fun affair, especially if one grew up enjoying the deep-as-a-dime stylings of Carter, younger brother to Nick, the slightly more famous Backstreet Boy.

I digress. The all-time, all-time, all-time line comes eight paragraphs in when Carter—apparently out of hits—says to the crowd of 500ish, “Since you guys are so amazing, I am going to sing you a song from my new album.”

As a former music writer, as well as a lover of concerts, I’ve attended many engagements when an artist utters similar words—and we all dash to the concession stands and/or bathroom. It’s one thing if we’re listening to, oh, Usher, or Drake, or anyone with a pulse of contemporary oomph. But (with apologies to the performers) nobody attends a Styx concert to hear a new Styx song. Nobody hopes Hall and Oates forgo Maneater or Rich Girl in order to play some lukewarm never-to-be-a-hit from the latest non-label release.

Aaron Carter certainly knows this. He’s been around. But he’s also grasping to that final morsel of hope that, just maybe, his new song will be a new hit.

Even when played before 500 Delaware kids who no longer pay for music.