A Picture That No Longer Works 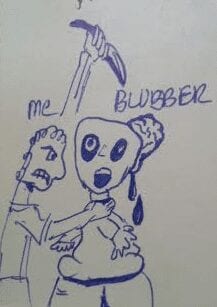 So I was showing my daughter my yearbook last night—Mahopac High School, class of 1990. She laughed at all the bad hair, snickered at my clothing (little has changed), found the etchings somewhat interesting. Last, after she went to bed, I looked through the book a bit more, and came upon the above illustration.

It was drawn by Jonathan, my good friend and one of the smartest kids in school. I actually remember the exact circumstance—our final English assignment was a 20-plus page report on a subject of our choice. We had just received back and papers, and Jon got either a B or B+. He was not happy.

So, humorously, he created the drawing you see here. It’s him, stabbing our teacher in the head with a knife, and the man’s brains popping out. I remember Jon drawing it, both of us laughing. He had already decided to accept an invitation to enroll in the United States Naval Academy. He was an A student. Plenty of friends. Good athlete. In other words, he was not someone who would, actually, stab a teacher with a knife. It was a joke, and everyone who saw the picture knew it.

Imagine it’s 2014. Imagine a kid just like Jon—smart, successful—created the same picture. Imagine someone saw it, then reported it. At the very least, Jon gets sent to the office and the yearbook gets confiscated. His parents are contacted, and the image is expunged. That’s at the least. At the most, the school psychiatrist is called in. The student is temporarily suspended, if not expelled. News gets out to the local paper, and a headline ensues—MAHOPAC STUDENT THREATENS VIOLENCE ON TEACHER AFTER POOR GRADE. That story gets out on Twitter. The news networks jump in, because they … can’t … fucking … resist. It’s been nearly 100 days since the jet was lost, and CNN needs something. Anything. So here’s a good one—seemingly normal and accomplished student plans to kill his teacher! Wow! Super wow!

The headlines ultimately fade, but the student is humiliated. The Academy rescinds its offer. He attends community college, but you Google his name and there it is—Teacher. Drawing. Stab.