If you haven’t watched the latest HBO episode of Vice, which concerns BP’s shitbag efforts to “clean” the Gulf of Mexico after the oil spill of four years ago, well, watch this. But, a warning—it’s painful.

OK, in case you’re too lazy/busy to take the 16 minutes, here’s what happening: BP insists it’s done a fine job cleaning the Gulf. Truth be told, it hasn’t. Not even close. It’s all spin. They used something called Corexit—a toxic chemical that breaks up the oil and makes it (by multiple estimates) 50 times more dangerous. Then, when the oil is dispersed, it plummets to the bottom of the sea, where it coats and kills pretty much everything. In fact, BP would have served the public significantly better by simply letting the oil float and kill off stuff on the surface. That, however, would be obvious to millions of Americans, who’d cringe at the rainbow clouds while applying their Coppertone lathers on a Floridian beach. Hence, BP used Corexit, aka out of sight, out of mind.

Hell, read this, from Mother Jones: 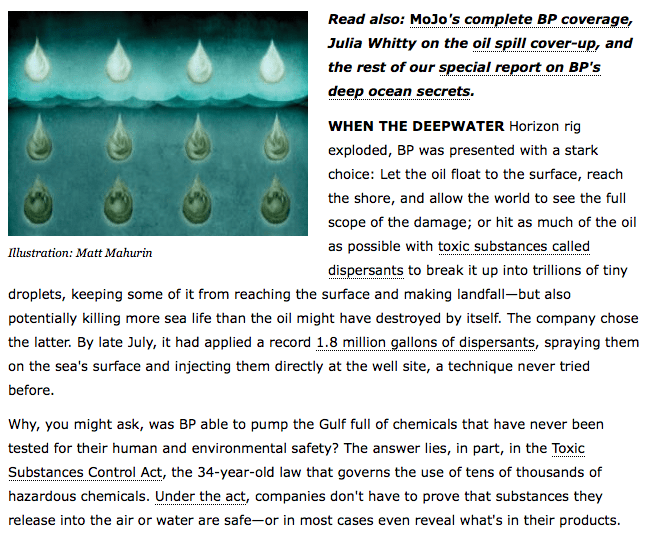 Wanna know the worst part? The absolute worst part? Ain’t nothing going to be done about this. Even though the majority of cleanup workers and Louisiana-Mississippi Gulf residents are almost certainly conservative, the Republican-controlled Congress refuses to bring up a bill banning toxic chemicals like Corexit. Why? Because the chemical corporations are HUGE donors to their campaigns.

And what’s more important? Safety, or getting re-elected?