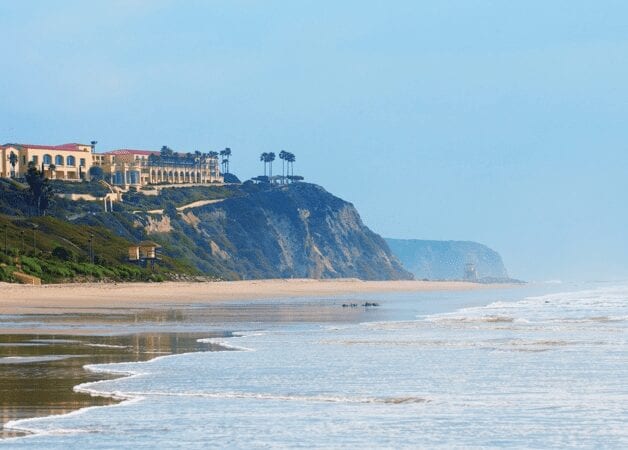 With the exception of four years at the University of Delaware and another 2 1/2 in Nashville at The Tennessean, I’ve spent my entire life living in New York State.

I love it here. It’s where I was born and raised. It’s where my parents, my sister-in-laws, my nephews reside. I dig the spring, cherish the summer, embrace the fall. I can’t get enough of Bear Mountain and strolls through Manhattan and bagels and pizza and the Freight House Cafe and Swirl Coffee and Tea Shop and Dylan’s Candy Bar. I’m all about the directness New Yorkers usually bring to the table—”Hey, what’s up?” and “Go fuck yourself.” Hard, straight, precise.

This summer, we’re moving to California.

“Wait,” many have said, “why are you moving to California?”

“Your wife’s from out west?”

I’ve met many, many, many folks who don’t get this; who find it baffling that a family would uproot for the sake of uprooting. But, again, I’m psyched. Beyond psyched.

My job is writing books and articles. Books and articles can be written anywhere. My wife is a college professor. Colleges exist across the United States. What we want—crave—is adventure. Uniqueness. Cool experiences, new sights and sounds and tastes and smells and textures. I’ve long wanted to live in Southern California, and my Showtime experiences did nothing to extinguish that desire. I’ve repeatedly said to the wife, “Let’s try California!”—and she repeatedly said, “Not likely.”

Then, this past January, she was away for our 12th wedding anniversary. She gave me instructions to open a card on the morning of the big day. I followed the request, and came upon this … 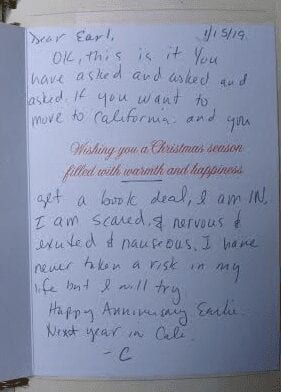 Along with the card was a wrapped gift. I opened it, and found this …

Some of my family members are not thrilled. What about holidays? What are you going to do on Thanksgiving? On Yom Kippur? Birthdays and Passover and … and … and … the kids. You’re … leaving.

I get it, and I understand.

Truth be told, this is hard. Painful. We’ve gone back and forth, back and forth. We live in an awesome neighborhood—diverse, open-minded, embracing—with dozens of kids and wonderful families. We’ve made friends who, I genuinely believe, will last a lifetime. My folks live 40 minutes away. My sister-in-laws are 10 minutes away. My nephews, too. Across the street is a boy, age 5, who I’ve watched grow nearly his entire life. When I see him outside I scream, “Best!” and he replies, “Friends!” It’s magical.

But here’s what else I get, and understand: Life is short. Terribly short. You blink, 10 years pass. You blink again, another 10 years. There is so much out there to experience, and I can’t handle the idea of confining oneself. We’re lucky enough to be able to take a shot; to try something new; to jump from the Atlantic to the Pacific and see if the water feels any different. We want our kids to see the stuff they’ve never seen before. I hope they try surfing. I hope they spend their high school years playing beach volleyball; taking walks through the sand on a warm December day. I hope they dig fish tacos as much as I dig fish tacos.

Back in 2008, the wife and I went to the local theater to watch Revolutionary Road, the Leonardo DiCaprio-Kate Winslet film about a suburban couple that always talked about escaping to Paris—but, ultimately, never did. The film resonated with me like no movie ever had. I felt their need to break out and stretch their limits, but also the resistance that came with such desires. There were bills to pay and responsibilities to handle and a looming power that crushes dramatic change.

Because I’m married to a truly amazing person, we’ve fought—hand in hand—to keep from falling into the trap of blasé. We’ve done house swaps, taken funky trips, tried shit many people don’t try (one hasn’t lived until he’s eaten a termite in a Costa Rican jungle). It’s a challenge, because the couch is awfully inviting, and Netflix can hold a guy down for hours.

But, come day’s end, we crave the new, and the unique.

This is the next step.

* For the record, she’s taken tons of risks. She just doesn’t think of them as risks. And we call each other “Earl.” Long story—here’s the explanation.