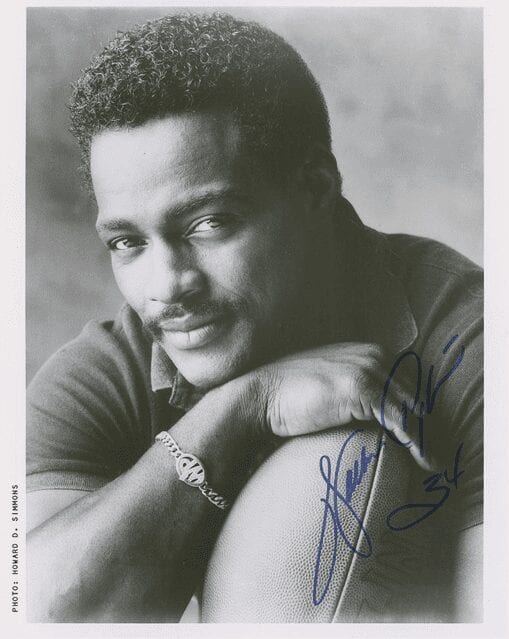 So a few minutes ago Gregory Hardy, a sports editor at The State who’s written for ESPN Page 2 and CBSSports.com, hit me up on Facebook with the following message. I asked if I could use it here, he had no problem. Sometimes the smallest things can make a day. Here’s a perfect example for me …

Hey, I have a little “pay it forward” story I wanted to share. Especially since you’re in the middle of a move, so you know what it’s like to have random boxes of your life strewn about everywhere.

I just bought a house. Which meant it was time to upgrade the living room furniture after five years of apartment living. The delivery guys came today. And even though they didn’t have to, they agreed to lug my old couch upstairs into my second-floor office. As the two guys were navigating around all the boxes of books I’ve yet to unpack, one of the movers spotted a copy of “Sweetness” that happened to be on top of one stack. “Walter Payton!” he exclaimed. “You a Walter Payton fan? That guy was the best!”

He went on and on for a bit. He was just really tickled to see Walter Payton. This guy had to be late 40s, early 50s, so I’m guessing that Payton’s heyday with the Bears coincided maybe not with his youth, but at least better nostalgic times. As they were leaving, I gave them a $20 bill to split for the tip. Then I handed the guy the copy of “Sweetness.”

“Here,” I said. “If you’re that interested in good ol’ Walter Payton, you can keep it. Go Bears.” Now, the whole time, this guy was friendly and genial, especially in I suspect the professional capacity of, “If we’re lucky, this customer won’t stiff us on a tip.” Yet it all seemed genuine.

But his reaction of being given the Walter Payton book was almost on par as if I had told him I was paying for his kid to go to college. “Really?” he said, taken aback. He flipped it over back and forth in his hands. “I can really have this?” Now, of course, maybe he just appreciated this on the same level of if I had let him have a Walter Payton autographed “Super Bowl Shuffle” record cover. But I just wanted to make you aware that in South Carolina today, you had a hand in making a working-class guy who’s lugging sofas around in 90-degree weather a lot happier that he got a perk with his job.