Walking off the court 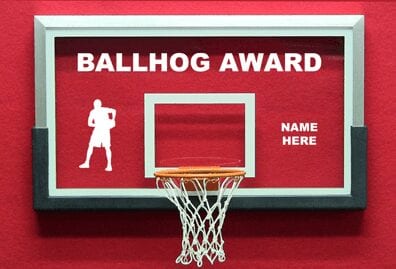 So last night I spent about 1 1/2 hours at the gym, working out with weights and the ol’ StairMaster. At, oh, 10:30, I headed over to the basketball court, to see if anything was going on.

As soon as I entered, I heard, “Hey, you want in?” There were nine guys on the court. They needed one more.

Teams were immediately divided, and I knew it’d be a regrettable experience. I’ve written much about Ski Cap McFuck, a dude at the gym who absolutely makes me want to vomit. But there’s another guy—close second—who I’ll call, ah, Slim McFuck. He’s a skinny guy, maybe 25-years old. He wears orange sneakers, baggy shorts, a sly grin. Like Ski Cap McFuck, Slim McFuck thinks he’s a particularly good basketball player … which explains why he averages 432 shots per game.

That’s an exaggeration. But not by much. And maybe, just maybe, I could deal with Slim McFuck thinking like Kobe Bryant, were he to play an ounce of defense. But he doesn’t. Ever. He shoots and shoots and shoots, then lets his guy glide past for uncontested buckets.

Anyhow, I can’t stand playing with this guy, and last night was no different. Slim McFuck was on my team, and he immediately took the ball up, dribbled left, dribbled right, shot, missed, played no defense, had his guy score. It happened again. Then again.

Finally, I walked off the court.

Jerk move? Perhaps. But I’m 42, with a bad back and a lifetime of playing with roaches like Slim McFuck. They’re everywhere, and no matter how many times their egos seem to be squashed by shooting, oh, 2-for-30, they return. Bolder. Stronger. More irritating.

I know I’m now the angry old guy with a chip on his shoulder, and that’s probably a bad spot to reside.

Why? Because my next blog post may well be written from a jail cell—after breaking Slim McFuck’s jaw with my forearm.