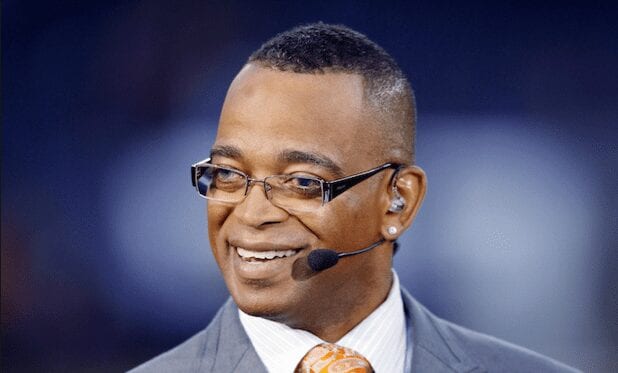 In case you missed it, ESPN’s Stuart Scott has died following a long battle with cancer.

I didn’t know Scott. In fact, I’ll be honest: Back in the 1990s, when I was at Sports Illustrated and he was at ESPN, he irked me. Actually, most of those guys at the network irked me. The swagger. The talk. The self-references to “The Talent.” Whenever we’d be at events, and the ESPN anchors showed up, it was as if five or six Elvis Presleys entered the room.

One time, inside the SI offices, we enjoyed a Revenge of the Nerds moment. In the leadup to the Baltimore Ravens-New York Giants Super Bowl, Scott had a very bad journalistic moment. After the media had used 95 percent of Ray Lewis’ press conference to pummel him with questions about murder accusations, Scott embraced the star linebacker in a tight hug and said, “Don’t let the motherfuckers get to you.” It wasn’t good, and a Sports Illustrated writer teed off, writing a fierce damnation of the Scott-Lewis embrace.

A day or two later, Scott left a long voice message for the writer … that was played repeatedly throughout the office, to great laughter. The highlighted line—”You wouldn’t understand. That’s just how we do”—became a punchline for a brief spell. If someone, say, spilled his cup of hot cocoa, and a colleague laughed, the spiller would glance and say, “Hey, you wouldn’t understand. That’s just how we do.”

That was a long time ago.

Truth is, back then I didn’t understand Stuart Scott and ESPN. I judged them on journalistic merits, when it truly wasn’t about that. Scott and Co. were entertainers—and Scott was, by far, the best of the bunch. His shit was tight. His catchphrases not only worked; they captured something. Just as was the case at SI, the faces of ESPN were pretty much all white. Scott brought color to SportsCenter. But not merely skin color. He brought flair and pizzazz and oomph and heart and soul. He made otherwise dull-ish telecasts genuinely interesting. He was, by all accounts, authentic and genuine. What he sounded like is who he was. It wasn’t an act, or bullshit. It wasn’t contrived or forced.

I didn’t understand at the time, but I do now.

That’s just how he did.