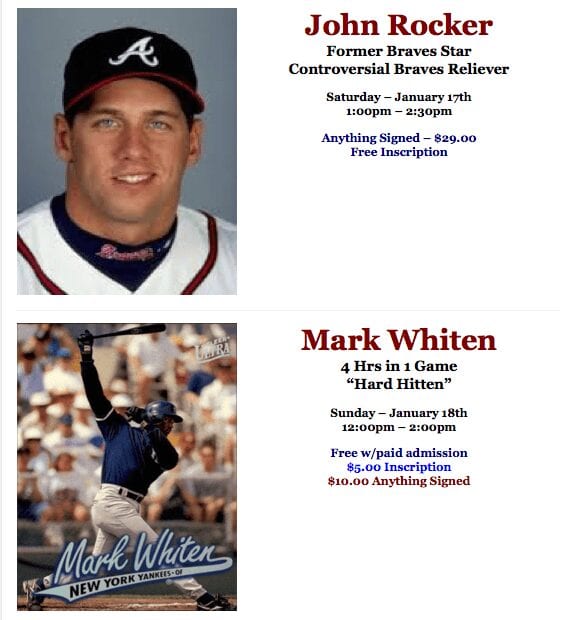 A few minutes ago a colleague forwarded me this notice about an upcoming autograph show at the Westchester County Center near my old home in New Rochelle, N.Y.

Whenever John Rocker is mentioned anywhere, by anyone, someone is always certain to make sure I find out. But in a weird twist, I consider Rocker’s appearance on Jan. 17 one of the least puzzling elements of the event.

See, while I don’t quite understand why anyone with a normal brain would pay Rockhead $29 for a signature, there are enough racists and xenophobes in New York to make it worth the man’s while. Rocker is a cult figure, and cult figures will always have their appear. It’s strange, but it’s also understandable.

That being said … Mark Witten?

Wait. Wait. I just wrote that sentence (That being said … Mark Witten?) without realizing I’d badly mangled the spelling of Whiten’s last name. Which is telling, considering my prime years as a baseball writer for Sports Illustrated overlapped the meat of Whiten’s Big League heyday. In other words: Who, exactly, comes to the County Center saying, “You know what I need? Like, r-e-a-l-l-y need? A signed ball from the guy who ranked 10th in the American League in triples in 1991!”

That, however, is only one of several confounding elements. For example, Gaylord Perry—a Hall of Famer and one of the most unique pitchers of all time—will sign anything for $20. On the same day, just 30 minutes later, Sid Fernandez will also sign anything. For $35!

Here’s a stranger one. On Jan. 18, two men will likely sit side by side, signing away. One, Jim Palmer, is a three-time Cy Young Award winner who was inducted into the Baseball Hall of Fame. He’ll sign anything for $35. The other, a marginal NFL wide receiver with one big catch, makes the same offer, but for $59.

At least Steve Carlton will be there.

He and Rocker have much to talk about.