So over the course of the past few weeks I’ve been singing the song from the commercial to that classic 1980s toy, “My Buddy.” I’m not sure why, and the other day my kids asked if they could see the original television spot.

They didn’t have to ask twice.

The “My Buddy” commercial is amazing for about 823 different reasons, none of them having to do with Kim Kardashian’s buttocks or former KISS drummer Eric Carr.

• First and foremost, “My Buddy” is an ass beating waiting to happen. Imagine walking around the playground, age 7, with a “My Buddy” tucked beneath your arm. I mean, look at the guy. He doesn’t seem psychotic, per se, but he’s a dead ringer for Adam Rich, the former “Eight is Enough” cuter-than-cute tyke who went on to years of addiction and has been arrested at least three times on DUI charges. Really, “My Buddy” is “My Adam Rich,” and if I’m this guy in 2015, struggling for dough and battling the demons of the forced undersized child labor that only a select few fully understand (paging Emmanuel Lewis …), I’m finding anyone associated with “My Buddy” and retroactively suing his/her ass off.

• Second, I am convinced the singer of the “My Buddy” theme song is a girl, trying to sound like a boy but ultimately sounding like a boy either halfway through puberty or halfway through early transgender work. I can picture the auditions—100 boys fucking the thing up, and the director finally settling on Wendy, the pudgy girl with dimples and a boy’s voice. “OK, Mrs. Smith, your daughter’s got the part …”

• Third, four seconds in we find Tim, Tommy and, of course, “My Buddy” peeking out of the clubhouse. And I must say again—Tim is destined for a beating. You just can’t bring your “My Buddy” into the clubhouse and expect respect. I’m actually guessing Tommy doesn’t want to play with Tim, and told his parents as much. But Tom’s mom and Tim’s mom are friends from the pool club, and it’s sorta awkward, so Tommy’s mom pretends to listen as her son whines on about Tim being, “just so weird. He brings that doll e-v-e-r-y-w-h-e-r-e …” 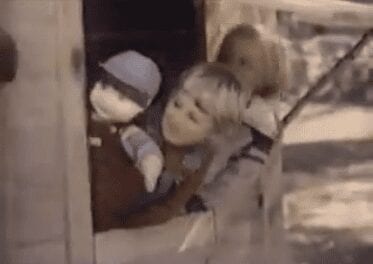 • A few seconds later, a very sad reality: Tommy has escaped, and it’s just Tim, his dog Manute and Dad. Now, Dad knows his son needs to ditch the doll, and he was strongly against “My Buddy” as a gift two Christmases back. But the wife insisted it’d be good for character development and growth and whatnot, and Dad glumly nodded his head and plunked down the $19.95. Now Tim has no friends to speak of, and Dad has to come home early from work every Thursday to meet with Tim’s therapist, then drag him and Manute around in the red wagon. 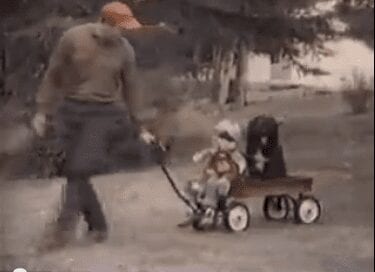 • I have to say, my kids are 100 percent on about seconds 11 and 12. The girl-disguised-as-a-boy-but-is-really-a-girl busts out the vocals here. She doesn’t just go with a simple, “that I know.” Nope. It’s, “thaaaat eyyyyyyeeeee knooooooooow.” That’s how you grab an audition, Wendy.

• Easily the most famous line from the “My Buddy” commercials is, “My Buddy and me like to climb up a tree.” And, admittedly, as a boy I watched the ad and sorta wished for a doll I, too, could bring up into a tree. However, tree climbing with a doll the size of “My Buddy” is an awful idea, and in 1987 12 separate lawsuits in nine states were filed against the Playschool Toy Company for damage caused to young boys who fell from trees while accompanied by a doll. True story.* 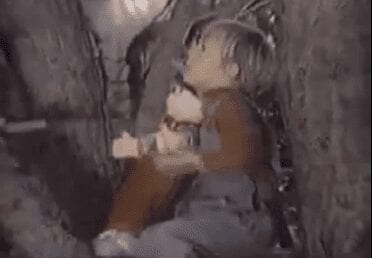 • I love my son. Absolutely love him. He’s a great kid. But if, as happens 19 seconds in, I were to catch him in, say, the driveway, spinning ’round and ’round with his “best friend,” I’d be a bit worried. It’s not the behavior. It’s the boys hiding behind the nearby bushes, preparing to throw rocks at his head, then steal “My Buddy” and set him on fire. 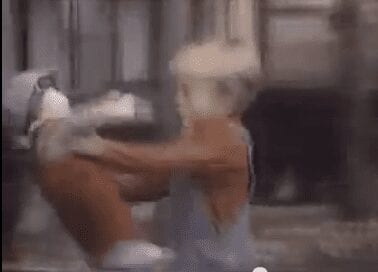 • I dig how the guys come running out of a clubhouse, labeled CLUBHOUSE just so the viewers don’t get confused. Ah, Madison Avenue … 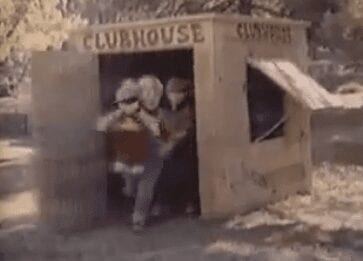 • The wrap-up is a little underwhelming. I mean, where’s the huge conclusion? The celeb cameos? “My Buddy” snorting coke with Doc and Darryl? “My Buddy” chillin’ with Mike Dukakis on the campaign trail? Dancing at Studio 54.

Instead, we’re left with a picture, and the inexplicable frog placement. 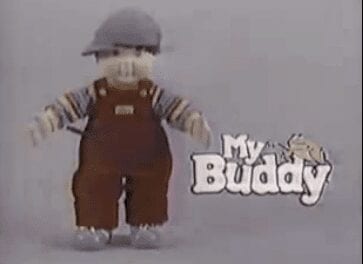 * Not even remotely true.