I woke up this morning, showered, brushed my teeth, gave my kids breakfast, drove my son to school, drove my daughter to the bus, came home, turned on my computer and read a suicide note.

It had arrived as a direct message at approximately 9 am, and—because most everything David Clingerman wrote was interesting and thought provoking—I dove right in. “When writing a note of this type,” it began, “you want to be as eloquent possible and explain yourself and your actions as clearly as possible. But no one will actually read this and find enough to satisfy their questions anyway. Plus, I’m suddenly under an unexpected time crunch …”

“I’m thankful for having lived such a rich and full life. I’ve flown planes, I’ve dove beneath the oceans, I’ve been a minister, I’ve played guitar to the best music… the list could go on and on, as it could for all of us. But I recognize that I have been fortunate to enjoy amazing experiences in life with amazing people. Mostly, I’m thankful for this little ball of awesomeness that is my daughter, Reznor Layne. I was 40 when she came into this world… and she gave me the best 2 years of my life.”

“I’m not meant for this world. Being a sensitive person in an insensitive world… it wears you down. If you’re empathetic to everyone, it becomes very draining. But life seems to be working out for most of you, and that’s great. It’s just not a great place for me. I have no future. I’m truly exhausted with the fight of daily life. I’ve lived a full life and died once already emotionally and mentally… tonight, this is just a formality to end the physical part.”

I was sitting on my little Southern California patio. The sun shining. The temperature was, oh, 70 degrees. A slight breeze. I was wearing baggy white basketball shorts and a shitty Spider-Man T. No shoes. On the right side of the table sat a cup of vanilla iced coffee. It was a perfect day.

The letter was … what? Unbelievable? Confusing? Jarring? At first, I thought I was simply misunderstanding. This made no sense. David Clingerman was an upbeat guy. A father. A husband. A huge music fan. My type of dude. But then … these words: “To all the people who might say that ‘suicide is for cowards’, or ‘anyone can kill themselves’, I completely disagree …”

For a few moments, I froze. Then, thoughts collected, I called 911 and told them my childhood friend had posted a suicide note on Facebook. They asked where he lived, and I named the town in Connecticut. The operator informed me this was solely California 911, and I needed to call the local police department. I did—My name is Jeff Pearlman. My friend wrote a suicide note. Please … do something.

I returned to Facebook—asked if anyone knew Dave’s cell phone number. Someone did. I called—voice mail. I left a long, rambling message, my voice cracking. “Dave, it’s Jeff Pearlman. Call me. Please. You don’t want to do this. You have a daughter. Let’s just talk …”

The news started to spread. David had posted the note on his Facebook page. He apparently sent it to tons of friends and loved ones. Dozens of our Mahopac High School classmates chimed in. Have you heard anything? What does anyone know? Updates? Please, updates? I called the local police department a few hours later, but they offered no news.

Then, roughly six hours ago, official word came in. David Clingerman was dead.

He shot himself on his 42nd birthday.

I grew up on Emerald Lane in Mahopac, N.Y., and if you made a right at the top of the hill, then another left, you’d come to the Clingerman household at 23 Kings Ridge Road.

I’ve known David since, oh, second grade. He was an interesting kid in an interesting town. Very athletic, very smart, very optimistic. I have this indelible image of his blond hair bobbing up and down as he ran. On the Lakeview Elementary playground, he could be an impossible cover in tag football—just too fast, too quick. In the hood, we competed in endless games of Kill the Carrier and kickball and soccer and … everything. Because Mahopac was a largely homogeneous town, you noticed those who were different. There were a handful of Jews, a slightly smaller handful of blacks and—I believe—one Jehovah’s Witness family. The Clingermans.

I always knew David didn’t attend birthday parties and didn’t celebrate Christmas or Chanukah. I vividly recall being in fourth grade, and preparing for the dreaded holiday concert. One day I overheard David ask Ms. Hart, our teacher, if he could skip the concert for religious reasons. His request was granted. Hence, I followed by saying, as a Jew, I, too, would like out. “We have a Chanukah song!” Ms. Hart yelled. “You’re staying in.” I don’t think, as a child, I ever spoke to David about religion. It’s just not something kids chatted about. But I do recall thinking it must suck, living in a town where 19,996 residents celebrate either Chanukah or Christmas—and you’re one of the four missing out.

Upon graduating high school in 1990, Dave and I lost touch. Life takes you places, swirls people here and there, up and down. Then, five years ago, I helped organize the Mahopac High 20-year reunion. And there, once again, was David Clingerman.

Only he wasn’t the David Clingerman of my memory. He was soooooo much better. Dave showed up with, well, swag. Cool haircut. Beautiful date (his future wife). We spoke about rock music (he was all about live shows, and posted this video just two weeks ago) and funky travels and living life with vivaciousness. He played the guitar. He liked a few drinks. Most notably, he hated—like, despised times 10,000—organized religion, and wanted nothing to do with Jehovah’s Witness. “I escaped,” he told me. “And I’m not going back.” I don’t think it’s a stretch to say David made a real impression on people that night. In a room filled with lawyers and bankers and construction workers and business owners, he was a flash of lightning. He just sorta came in and owned the room. 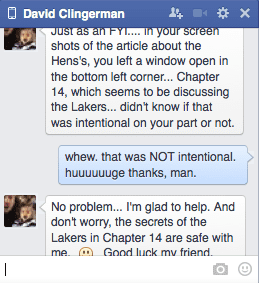 … but, mostly, the exchanges involved my favorite subject: Organized religion. It was an area where, clearly, David and I shared myriad beliefs. We both saw religion as more problem than answer. We both were frustrated by the occasional awful acts committed in the name of God. We both wondered how people had faith, when so much seems to point at nothingness over Godliness. I don’t think David was looking for answers or seeking enlightenment. Nope. I’m pretty sure he was just pissed. He’d been raised Jehovah’s Witness and he hated the residue. I don’t know if his love of really loud, hard music was a middle finger to God, but I suspect it probably was.

When someone kills himself, there’s a tendency to call the person “selfish.” And it’s understandable. What sort of person leaves a daughter without a father? A wife without a husband?

Only it’s not that simple.

Despite outward appearances, David Clingerman was depressed. Not depressed in the way one gets when an ice cream cone falls to the gravel, or a favorite football team loses with no time remaining on the clock. No, he was depressed in the I’m-miserable-and-want-to-die way. He apparently felt this way for years, considered ending his life myriad times, then finally followed through. When people (understandably) say, “I wish I knew he was feeling that way. Maybe I could have talked to him …” well, it belies the prison of depression. It’s not about an upbeat conversation; or looking into your daughter’s eyes and realizing everything’s OK. No. It’s clinical. It’s crippling. It’s blackness.

This was my least-favorite day. Maybe not ever, but definitely Bottom 10. A few hours ago, when I told a loved one about David’s death, she replied, “Well, you just have to apprec—” and I stopped her in her tracks. Someone’s passing isn’t an invitation to feel good about all I have. It isn’t reason to kiss my kids and hug my wife and go on a long hike. Truthfully, I feel like shit, and I should feel like shit. A man I knew as a boy was so despondent that, last night, he decided to cease existing. That’s no reason to appreciate all I have. It’s just not.

That way, he can live forever.