My life as a college newspaper editor

Last night, while jumping around the information superhighway, I realized that The Review, my college newspaper, has most of its archives online. I proceeded to spend the next, oh, two hours digging in.

The experience brought back myriad memories. Even though I’ve had my share of profound experiences at The Tennessean, at Sports Illustrated, at Newsday, writing books, there was nowhere more important for my personal and career development than the small shitty Review office, located on the second floor of the student center on the University of Delaware campus.

Specifically, I cite my senior year.

I was editor in chief of the paper. Which, in hindsight, is sort of funny, because I was—by definition—the absolute wrong guy for the job. First, my entire experience was based in sports, and I’d probably written, oh, 10 news stories over my first three years of college. Second, I was ridiculously (and unjustifiably) cocky and full of myself. I thought I was God’s gift to writing, even though I knew little of reporting and fact checking. Third, an election was held for the position at the end of my junior year (1992-93), and the person I ran against (a news editor named Adrienne Mand) was, by far, the superior candidate.

I still vividly recall the day of the election. Here’s how it worked: Adrienne and I both prepared speeches, which we delivered before the entire staff of, oh, 60 writers and editors. We took questions, explained our positions, then everyone voted. I believe Adrienne went first, and she was—as always—smart and detailed and impressive. I followed. I remember being nervous, both because I was 21 and dumb and because in attendance was Karen Levinson, a woman who wanted to bash my head in.

Karen was right to feel this way. Several months earlier, I submitted a story for the first issue of 1993. It was about spending New Year’s Eve in Times Square, and I REALLY liked the piece (Why? Because I was a cocky punk. And I REALLY liked all my pieces). Anyhow, Karen was the editor, and she—as was her right—changed a ton of the material. I was livid. Beyond livid. And, when no one was looking, I snuck into the layout area and switched the byline from my name to hers … 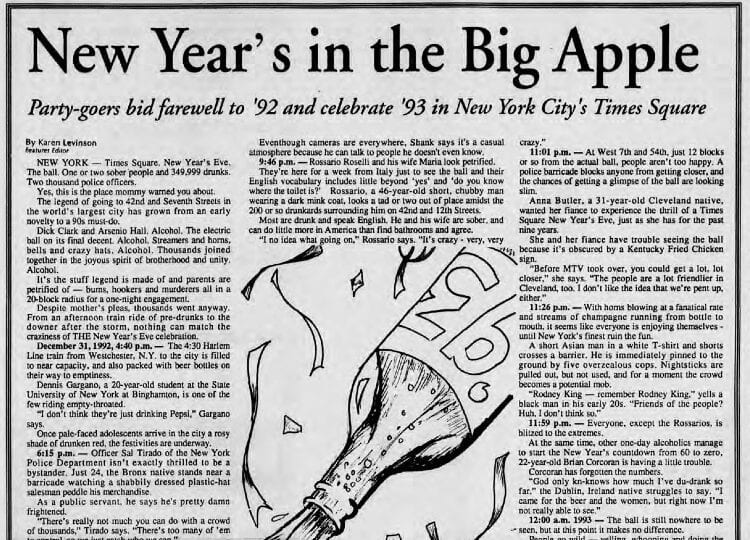 This did not go over well. Karen was incensed, and memorably threw a chair across the office. The paper’s editor, Doug Donovan, rightly suspended and demoted me. Again, I was a punk-ass loser with no self-control and the inability to understand that, come day’s end, my story was meaningless and disposable.

So now, I was wrapping up my editor speech, when Doug said, “OK, any questions?”

Karen’s hand went straight up. She wanted to know how I could be trusted, when I committed such an awful and lowly act. My response was, in hindsight, so painfully mean and dickish, I deserved to both lose and be coated with I Can’t Believe it’s Not Butter and fed to starved, vampire-toothed llamas. I looked at Karen and told her, under a Jeff Pearlman administration, we’d only hire good editors.

What followed was one awful moment after another after another. It started with the final issue of my junior year, when the incoming editor traditionally wrote a column explaining what readers could expect from the newspaper. Mine was, well, the worst. Smug and arrogant and petulant. Here, take a read, if you have the stomach …

To this day, it’s probably the most regrettable thing I’ve ever written. In fact, later that night I received a call from one of the journalism professors, telling me how hurt he and the other faculty members were. “You’re basically saying,” he said, “that you don’t need guidance or rules or help …”

He was correct. That’s exactly what I was saying.

Only I did. Desperately. My four predecessors as editor in chief were all absolute superstars. Ted Spiker is now the chair of the University of Florida journalism department, and the author of a shitload of books. Sharon O’Neal and Rich Jones went on to work for The New York Times. Doug has been a Baltimore Sun star for a long time. They were smart and insightful and willing to take criticism.

I was just a punk who wanted to make the paper fun.

The results? Nonstop errors. Awful lapses in judgement. There was a story about a peeper who stalked female students around campus. Our headline: HE COMES BY DAY, HE COMES BY NIGHT. A football player allegedly sexually assaulted a student, and I decided, sans a moment’s reflection, to run his mugshot on the front page (charges were ultimately dropped). I wrote a weekly column, and I thought—for a reason I can’t even fathom—it’d be funny to have my mugshot taken without a shirt (lord knows, I was no bodybuilder).  I habitually ripped sororities, probably because my warped mind thought it’d help get laid (it didn’t). Oh, speaking of getting laid. I also wrote a column, headlined THE SECRET LIFE OF A DELAWARE (GASP! ) VIRGIN that ran to great (campus) fanfare, and resulted in me being interviewed for a Philadelphia news segment that I’ll never live down.

The lowest moment? Shit, there were so many. But it’d have to be when Pike, a popular fraternity on campus, was involved in some sort of alleged sexual assault. It was front-page material, and as the sub-headline I ran a pullout quotation from the organization’s student president, who said, “We still believe he is not guilty.” Only, eh, at 2 o’clock in the morning, high on Coca-Cola and sleep deprived for the 120th-straight day, I accidentally typed (this still hurts), “We still believe he is not innocent.”

I remember the morning the paper came out. I had a roommate named Paul Hannsen, who was best known for being a long-haired barefoot runner on the cross country team. He entered our room and, with a laugh and a shrug said, “Is this right?”

A few hours later, the misquoted president was this close to my face inside the Review office, screaming, pointing, (rightly) threatening to sue my ass. I truly believed my journalism career to be over at that very moment.* I went home and cried like someone who lost a child.

Wait. There was more. I desperately wanted to put out an April Fool’s issue because, hey, I was a fool. So we did. And it was awesome. Remains the best thing I ever did as a college newspaper editor, and the front page is framed and hanging in my garage … 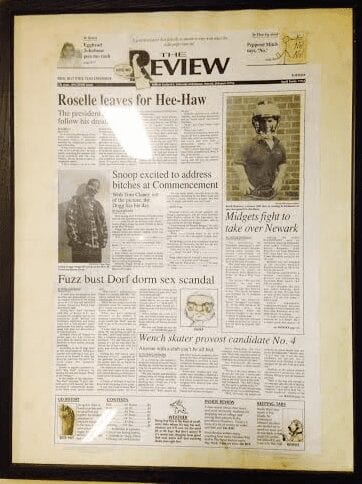 Not sure if you can tell, but the main story on the right is headlined, MIDGETS FIGHT TO TAKE OVER NEWARK. The photo is a football player’s head (it was the former Blue Hen quarterback, Bill Vergantino) atop the body of a short-statured person. Ha-ha, hee-hee. Well, the short-statured person (posing in an archived picture we found in a cabinet) happened to be a former University of Delaware student. Whose, ahem, mother still lived in town. She called our offices and ripped me to shreds, promising to enlist the Little People of America to picket the newspaper (I was such an attention-seeking dick, this actually appealed to me). Poor Adrienne, who was working as the No. 2 editor, nearly lost her mind, babysitting me and my crap ideas. If she lives to 100, I’ll assume she would have reached 110 had she never known me (she happens to be one of my all-time closest friends, and as decent a person as I’ve ever met). I almost forgot—the dean of students was furious, having taken enough calls from the incredulous parents who wondered how the university could invite Snoop Doggy Dogg to speak at commencement.

So, in conclusion, I sucked. I was the worst editor of all time, and when someone at the Society of Professional Journalists analyzed our issues for the year-ending college media award season, he wrote a summation of the 1993-94 Review that included the sentence, “Be glad Jeff Pearlman is leaving.” That one stung.

Yet here’s the weird thing: For all my ineptitude, I wouldn’t trade that year or change that year. Cold pizza. No sleep. An orange couch that smelled from beer. Blind Melon and Ween and Nirvana playing from the small stereo. Hickey talking shit to Jimmy P. Miller. Michael Lewis wearing his jean jacket and Jets pendant. Jason Garber’s addiction to Snapple. Rich Campbell doing the sock dance. The time an editor covered a Matthew Sweet concert and wound up sleeping with the guitarist. The time an editor covered a pro-choice rally and, inspired by the moment, took to the microphone to shout, “I’m [X], I write for The Review and I’m pro-choice!” The time I sent a photographer to Minneapolis to cover former Hen Keith Garagozzo‘s debut with the Twins—and he returned with one slightly usable picture (“Hey, he was standing pretty far away …”). We were a twice-weekly student newspaper, and we were absolutely loaded with talent. I’ll accidentally leave folks out here, but among my peers who entered the field were Adrienne, Brian Hickey, Michael J. Lewis, Chuck Creekmur, Greg Orlando, Matt O’Donnell, Liz Lardaro, Laura Fasbach, Melanie Mannarino, Rachel Cericola, M. Tye Comer, Runcie Tatnall. On and on and on. And, to this day, I consider the entire staff to be part of my extended family. When we get together, it’s like no time has passed. When I read someone’s work, or see someone on TV, I feel like a proud father or uncle or brother.

It was the worst time of my life.

It was the best time of my life.