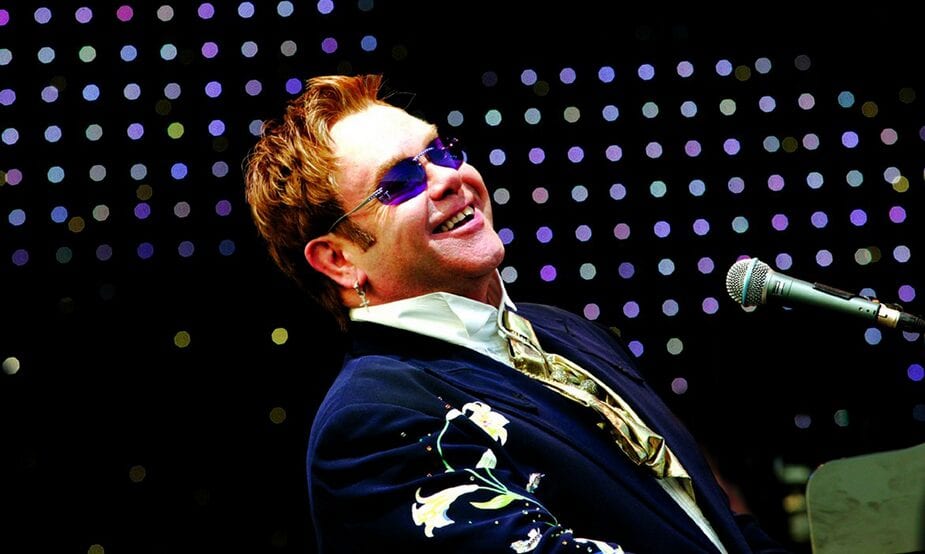 I’m a big fan of lists, and my wife, Catherine Pearlman, is a big fan of Elton John. Which is why I’ve been bugging her forever and ever to compile a jeffpearlman.com ranking of Elton’s 25 best songs.

I love him because his songs chronicled my childhood. My parents were big fans. They blasted his records on giant speakers at home, and we all sang to the tapes in the car. I love how Elton plays the piano. He isn’t delicate. He doesn’t tickle the ivories. He pounds them with his stubby fingers and makes the piano move.

Throughout most of the 1970s Elton was flamboyant. He was a showman. He wore crazy costumes covered in sparkles and feathers. He wore enormous glasses and a colossal duck suit. Who doesn’t love a guy singing and playing the piano wearing a giant duck suit?

I love Elton John’s songs because they are poetry. He and Bernie Taupin, his long-time writing partner, created some of music’s most beautiful lyrics. If you haven’t taken the time to read (not listen) to some of the words, you are missing out. I read Elton John and Bernie Taupin: The Complete Lyrics like it was the Holy Grail. The answers to all of life’s questions are contained in that book.

If you were to ask me to choose who I would be stuck with on a stranded island (and I couldn’t pick family), I’d go with Elton. And yup, I know he’s gay.

In my 43 years, I have listened to Elton’s songs for hours and hours and hours. I would venture to guess this probably rates me as a super fan. But it also makes me all the more qualified to bring to you my list of Elton John’s 25 best songs …

1. Mona Lisas and Mad Hatters: I haven’t a clue what this song is about, and I challenge you to figure it out. The lyrics are all over the place but they evoke poignancy. Elton sang this song at the Concert for New York City after the 9.11 attacks in 2001. I was living in lower Manhattan, and it was a nightmarish time. That concert was a moment of catharsis and it elevated this song to the top of my list. (Plus, I’m a sucker for the mandolin).

2. Greatest Discovery: This song perfectly captures the moment when a little child meets his brand new brother for the first time. It’s easily the most poetic and epic of Elton’s work, and the lyrics speaks for themselves. When I hear “Greatest Discovery” I think of the love I have for my sisters and the love between my two children … and I cry.

3. Tonight: My sister and I received Atari one year for our big Chanukah present. We played Grand Prix for hours listening to this song. It is long, it is dramatic—and it defines Sunday mornings for us. But it also happens to be a touching and striking ballad—and Elton’s last note, held for eternity, speaks to what makes him so insanely gifted as singer, as well as songwriter.

4. Skyline Pigeon: It’s a metaphor—the skyline pigeon represents the caged songbird. I always loved this song for its melody and cadence. But seeing Elton perform it at Ryan White’s funeral gave it another meaning. Ryan and I were born two days apart and somehow that made his illness and death more real to me. He was only 18 when he died of AIDS, with Elton at his bedside. Interestingly, Elton saw his appearance in the video of this performance and realized he needed to stop doing drugs and get clean. In the years since Ryan’s death the Elton John AIDS Foundation has raised more than $300 million.

5. Harmony: In some cruel joke, this is the B-side to Bennie and the Jets, which would be No. 1 on my list of the worst songs ever made (Elton’s or otherwise). “Harmony” is sort of ballady, but without being Celine Dion cheesy. And, despite its nod to harmony, it boasts gorgeous melody.

6. Ticking: Long before Columbine or mass shootings became a thing, Elton delivered “Ticking,” which tells the story of a young man snapping at a bar. Somehow in one song he lets you in on the point of view of the police, the mother, the people in the bar and the boy. Brilliant.

7. Funeral for a Friend: First some howling wind. Then a bell tolls. For whom we don’t know. Apparently for a friend. But then the synthesizer comes in and—BAM!—you get it. The song is simultaneously depressing and uplifting. Friends, let it be known that you have been given the green light to play this song at my funeral.

9. Levon: Like “Mona Lisas and Mad Hatters,” I am not entirely sure what he’s talking about here. Elton says it is about a guy tired of life. But that’s a loose interpretation. Here Elton shows how the melody can make the song and lead to a feeling—as opposed to the words giving such a prescribed meaning.

10. Goodbye: In one minute and 47 seconds Elton paints a portrait of death or an outsider or … well, who knows what? But the title and the first note set the tone and it is haunting until all goes silent.

11. Indian Sunset: Elton and Bernie take on the plight of Native Americans in this haunting tale of a lost way of life, stolen land and a massacre of a people. The song came out in 1971. Thirteen years later, it (brilliantly) reappeared as a sample in Ghetto Gospel, the second single on Tupac Shakur’s posthumous album, “Loyal to the Game.”

12. Your Song: Elton first hit the music charts with this 1970 song off his self-titled second album. It was written by a 17-year-old Bernie Taupin, and is an ode to young love. A decade ago, Rolling Stone ranked it the 137th greatest song of all time.

13. Burn Down the Mission: Great example of Elton’s enchanted piano playing and butter voice. Thirty two years after its release, Toto covered it for the 2002 album, “Through the Looking Glass.”

14. Border Song: Banging piano keys, gospel choir—pure Elton. And the lyric “There’s a man over there what’s his color I don’t care/He’s my brother let us live in peace” just says it all.

15. Talking Old Soldiers: Tumbleweed Connection was released in 1970. It’s by far Elton John’s best album, and it’s arguably one of the best albums ever created. This song beautifully tells the story of how it feels to grow old and see so many of your friends pass away.

16. I Guess That’s Why They Call it the Blues: This one is hard to explain. It’s undeniably catchy, and there is some good piano banging. But mostly it’s the first two lines that make this song for me: “Don’t wish it away/Don’t look at it like it’s forever.” The song instructs us to live life to the fullest without syrupy sentiment. Seeing life slip through friends’ fingers brings me back to this affirmation and the joy of the tune.

17. Amoreena: Elton showing a country-bluesy side. “Amoreena” could be played in any country bar in America. This is just a bright and fun tune about a girl. Maybe it isn’t the best song ever but it is my husband’s favorite. So it makes the list.

18. Measure of a Man: Sometimes you hear a song in a movie and that song is made better because of the perfect placement in a scene. And sometimes the movie itself is made better by a perfect song. In the case of “Measure of a Man,” it is both. Played in a slideshow during the credits of Rocky V, Elton owns the best four minutes of the film.

19. Ballad of a Well-Known Gun: Bluesy with the gospel sound that compliments Elton’s grand piano playing. This song is an excellent example of Elton’s versatility, piano playing and spunk.

20. Yellow Brick Road: Not one of my ultra favorites, but it’s a true classic. Elton uses falsetto here to create part of his signature sound. Listening to Elton sing it live back in 1976 makes it more list worthy.

21. Circle of Life: Here we go again with a movie that makes the song (and another gospel choir). Disney’s “The Lion King” opens with this. Toward the end of the song Simba, the pride of the animal kingdom, is born. At the instant he is held up for the whole world to see the song hits its stride, bringing the momentous moment alive. When my son was born 12 years later, the doctor held him up in the exact same way, and I could practically hear Elton playing in the delivery room.

22. Empty Garden (Hey Hey Johnny): Without knowing the back story, you might pass over this one. But “Empty Garden” was written in 1981 as a tribute to John Lennon, Elton’s close friend who had been killed 1 1/2 years earlier. (Little-known fact: John’s The Man Who Never Died was also a tribute to Lennon)

23. Friends: Elton and Bernie wrote this song for the soundtrack to the movie Friends in 1971. This one’s not deep—just simple and good.

24. I Never Knew Her Name: Tell me your foot doesn’t start tapping in the first five seconds of this song. OK, I don’t believe you. If you need a pick me up, here’s my gift to you …

25. Don’t Go Breaking My Heart: Some might debate this one making the list. But Kiki Dee and Elton bring forth some classic Sonny and Cher mojo. It’s catchy, goofy, and this video belongs in a 1970s time capsule.

FOUR SONGS THAT NEARLY MADE THE CUT …

• I’m Still Standing: Not written as an anthem for Elton but it’s become one.

• Lady Samantha: Elton with a baby voice right before making it big.

• Take Me to the Pilot: Like “Burn Down the Mission” and “Border Song.”

• Dixie Lily: Had Elton been a country singer this would have been a hit. I wait to hear the train whistle every time.