Selena’s return and the thin line between cool and creepy

Three years ago, when Tupac reappeared as a hologram at Coachella, I thought it was pretty cool. Yeah, there were some ethical issues. And, no, I’m not sure Tupac would have approved. But it was the odd morphing of creepy and neat, and the interplay between him and in-the-flesh Snoop and Dr. Dre really provided a riveting visual experience.

That being said, humanity has a way of taking technology and funky uniqueness and, eh, going too far. Or, to word it differently, people lacking sense get a hold of a concept, think, “You know what would be awesome!!!!!” and run with it.

You remember Selena, right? Texas born and raised, real name Selena Quintanilla-Pérez. Back in the early 1990s she was known as the “Queen of Tejano Music.” Nice voice, big smile, sang a tune (Dreaming of You) that can still be heard on the CVS loop. Selena was tragically shot and killed at age 23 some 20 years ago, and in 1997 JLo starred as the singer in a pretty OK movie.

Here are the details … 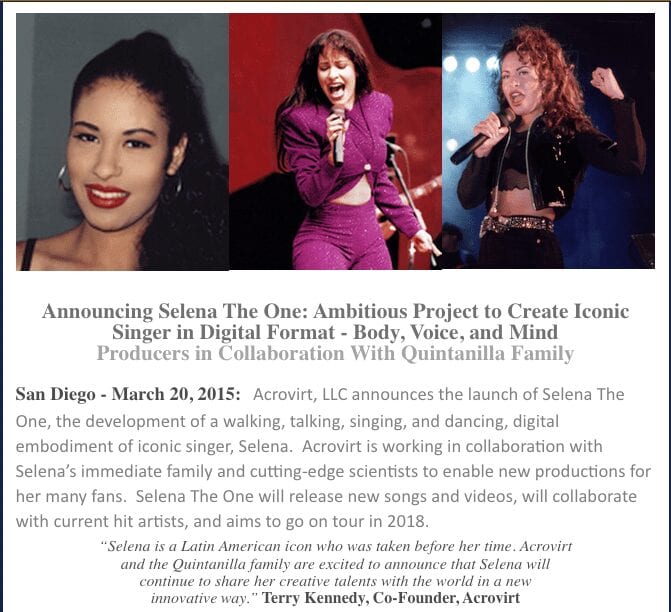 I’m not sure where to begin. Initially, I was thinking hologram. But, really, who wants to see a hologram of Selena? I know she was big in the early 1990s, but so were Debbie Gibson and Tiffany. Then, with the “cutting-edge scientists,” I wondered if there was some oddball plan to go all Frankenstein, visit Selena’s (truly bizarre) grave, remove her remains and, um, do whatever it is mad scientists do to Selena’s remains. But that’s waaaaaay off the map; more circus freak show than triumphant comeback.

Ultimately, I found this video, sponsored by Acrovirt, which—for pure comedic joy—you 100-percent have to watch. It’s pretty similar to those ads for cryogenic freezing plants, except even more kooky.

That said, if you want Selena to return and make new music, send money now!