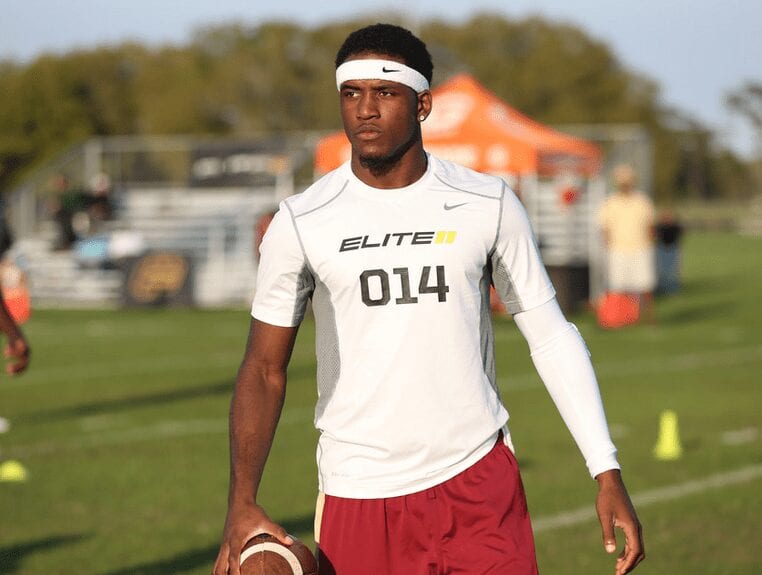 In case you missed it, De’Andre Johnson—a freshman quarterback at Florida State—was kicked off the Seminoles after video surfaced of the kid punching a woman in a bar.

1. Johnson will never play for the Seminoles again.

2. About 100 other Division I and I-AA coaches are sniffing around.

3. Johnson will issue a statement, explaining he realizes he needs to grow, and that he asks for forgiveness and is seeking counsel. “There’s no excuse for ever putting your hand on a woman,” he’ll say. “I know better. If you’re gonna do it, use two hands.”

4. Johnson will enroll at some NAIA Division IIXXVC school in a part of Texas you never knew existed. He’ll throw for 98 touchdowns, 70,000 yards and lead the Bulldogs (or Tigers. Or Eagles. Or Hawks) to the Prairie Range Something and Something title.

5. ESPN’s Tom Rinaldi will come down to Rockmound, Texas to do an E:23X special on Johnson. We’ll learn that he had a tough upbringing, that he marks up his Bible, that he’s grown tremendously this past year, that he’s taken “Peanut,” the team’s mentally handicapped equipment kid, under his wing. He has a tattoo that reads either ONLY THE STRONG SURVIVE or ONLY GOD CAN JUDGE ME. He calls his mother every morning at 7:23. There’ll be shots of the remote campus, of some tumbleweed, of the fat white 41-year-old coach who considers Johnson to be, “like one of my sons.” Johnson, the fat white 41-year-old coach says, is just like any other member of the roster, mowing the field and eating cafeteria sludge and gathering in John-Steve Walker’s room for whatever Netflix show is particularly popular.

6. Johnson signs a scholarship to attend Alabama. Nick Saban says he believes in the kid; that everyone in America is entitled to a second chance (“That’s what makes our country great!”); that he’s the second coming of Whatever That Last Kid Was Named Who Threw The Ball Super Far. “As far as I’m concerned,” Saban says, “Br’Andre Johson has paid for his misdeeds.”

7. No. 14 De’Andre Johnson crimson-and-white jerseys are all the rage in the University of Alabama’s bookstore and on its website. Of course, the jerseys don’t actually say JOHNSON across the back, hence it’s completely fine to charge $95 a pop. So what if his mother, holding down two jobs, eats expired tuna from a can for dinner every night because the conservative political figures Saban habitually votes for reject ever raising the minimum wage?

7. De’Andre Johnson is drafted No. 1 overall by the Oakland Raiders.

There are lots of bars in Oakland.