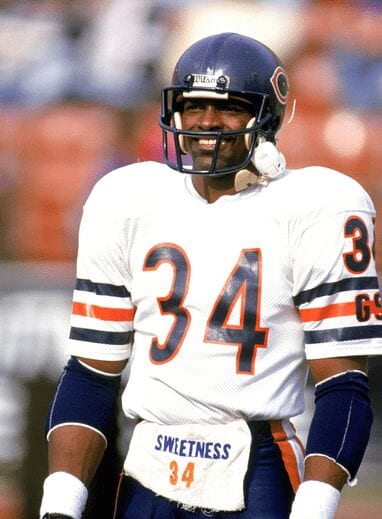 So I very much enjoy engaging with people, via Twitter and Facebook about my books. If you have questions, compliments, complaints, I almost always reply. Heck, if you’re taking the time to read (or consider reading), who am I to ignore or play dumb? I’m just a guy who writes books. Cool job, but nothing special.

This is a long lead up to Halli Briscoe, a girl from Texas who, I believe, will soon be attending Oregon State. I’m not 100 percent sure of Halli’s age—so it’s unclear whether she’s off to college this fall or in a couple of years. Her Twitter bio reads: “He died for me, I live for Him. Prosper. WOGA. Future OSU Beaver. Jeremiah29:11{Never Die Easy}”

Earlier today, Halli hit me up at Twitter with this …

It’s not the first time someone criticized my book, “Sweetness,” but it was surprising considering: A. Halli is sort of on the young side for Walter Payton devotion; B. The criticism pretty much died once people actually (gasp!) read the book; C. It’s the first time (I think) I’ve actually been accused of, literally, printing “lies” about Payton—a man I came to truly love and admire.

Anyhow, I asked Halli to elaborate, and she did. With this: 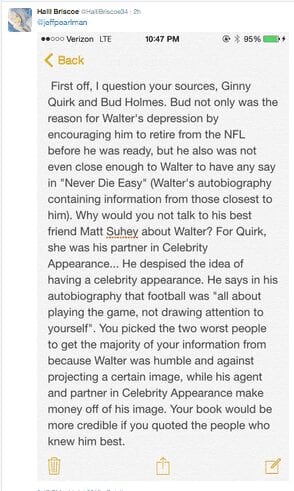 I followed by asking whether she’d actually read my book. She replied again, thusly … 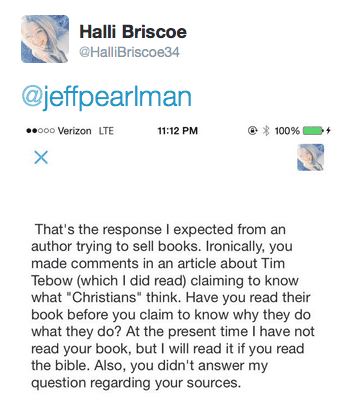 Being that Halli put a good amount of time into her thoughts and questions, I wanted to give an equal amount of devotion to the answers. I also want to commend her. First, because she clearly has a very real, very strong love of Sweetness, and hasn’t allowed the 16 years since his death to dull that. Second, because she spoke out. As people should do. It’s easy to say nothing; to sit back and stew without emoting. So, truly, Halli Briscoe deserves props. And I’m quite certain she’ll do Oregon State very well.

Now, with nary a morsel of anger, I’ll answer the questions to the best of my abilities. I’ll go backward:

A. Halli, asking whether you read the book was not my way of trying to sell a copy. This is probably far too much information, but by now (contractually, royalties-wise) you purchasing “Sweetness” off of Amazon or at the local Barnes & Noble makes me nary a cent. I asked if you read the book because you seemed to have limited information on its content. Feel free to e-mail me at anngold22@gmail.com and I’ll send you a copy for free.

B. I have read the Bible. Much of it I love. Much of it I don’t love. This is just a differing of opinion between two people. Your faith is your faith, my lack of faith is my lack of faith. The Tebow post you’re referring to was sloppily done, and you’re right to rip it. I was pointing toward his family’s missionary work, which struck me as somewhat misguided. But the blog entry stunk. All the crap I took was warranted.

C. As for my sources: I interviewed 678 people for “Sweetness.” That’s a personal record and, I think, pretty darn thorough. I’m not sure why you’re under the impression I never spoke with Matt Suhey—we had three different interview sessions, including one lengthy in-person sit-down. I also met, in person, with Walter’s brother, Walter’s son, Walter’s daughter. I spent tons of time with his childhood friends, with his college friends, with his college and professional teammates. As for Ginny and Bud, you’re simply misinformed. First, both people were suggested to me by others close to Walter. Bud Holmes represented Walter from the time he was drafted through the completion of his career. That’s 13 seasons and an enormous amount of time together. And yes, you’re right, Bud did encourage Walter to retire—rightly. In 1987 Walter Payton was a shell of his former self. He lacked both the burst and physicality of his younger self, and by the end watching him run was just sad. Agents are supposed to look out for the best interest (physically and financially) of a client. In that regard, Bud did.

Also, you’re right—Bud did not have any involvement in “Never Die Easy.” The relationship between Walter and Bud faded after his retirement. But, considering my book was about Walter’s entire life, and not merely the 12 years between retirement and death, Bud’s input was vital. Most people who knew Walter would tell you a Paytion biography without Bud Holmes isn’t a Payton biography.

Now, before I get to Ginny, let me backtrack and explain one thing that, at your age, I didn’t know, either. Namely, athlete autobiographies aren’t actually written by the athletes (with v-e-r-y rare exception). Walter Payton did not sit down with a pad and pen and write “Never Die Easy.” He conducted a bunch of interviews with a ghost writer (a hired journalist, in this case Don Yaeger), and that person wrote the book. Because Walter was very ill, he had little involvement with the final product—which was released after his death. So when you say “Never Die Easy” involved “the people who knew him best,” you’re sort of misinformed. The book was lovely and warm and nice and inspirational. Really, it was. But “Never Die Easy” was also shallow and incomplete. It missed many key figures from Walter’s life, mainly because they were people who also knew of Payton’s dark side (especially pertaining to the hoax that, by his life’s end, was his marriage to Connie—a woman he didn’t even live with).

Ginny worked with Walter for years and years and years. She was by his side more than any other person in his life—and there was no close second. This is a fact that will go undisputed. She was his confidant, his shadow, his muse. She was by his side at the time of his death, and handled full arrangements of the funeral. Walter’s first choice for the executor of his estate was not Matt Suhey. It was Ginny.

Furthermore, nobody forced Walter to make celebrity appearances. He was his own man, and this idea that he “despised” publicity is just off. Heck, he hosted a radio show for years; did commercials for myriad products; hosted Saturday Night Live and sang a jingle for Kentucky Fried Chicken. There was no gun to his head.  Bud and Ginny brought opportunities; certainly encouraged some of them and discouraged others. But Walter Payton made appearances because they paid well and he enjoyed the limelight. Period. Nothing wrong with that.

Again, Halli, I’m not mad. Or defensive. I get it. Having a hero is special, and you want that person to meet your expectations.

The sad reality, however, is that even the greatest among us are human. With flaws and warts and scars. Nobody’s perfect. But, in learning about those imperfections, we’re able to greater appreciate how one overcomes tough times to thrive and excel.